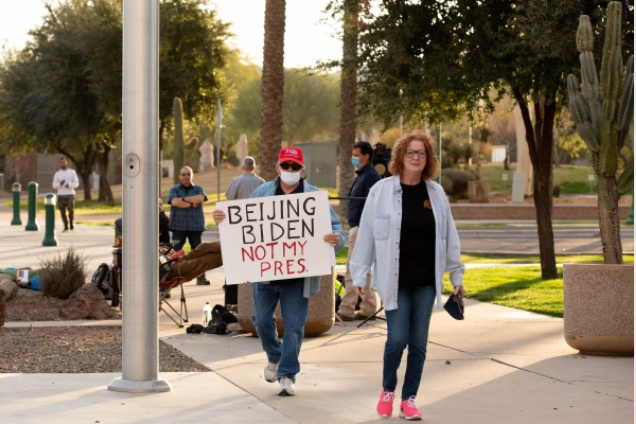 Danny Meehan holds a protest sign as he and Pamela Meehan walk past members of the news media outside the Arizona Capitol in Phoenix on Wednesday, Jan. 20, 2021. MUST CREDIT: Photo for The Washington Post by Courtney Pedroza

AUSTIN, Texas – They had lost a sister to covid-19 and watched in horror as the Capitol of the nation their father had immigrated to was trashed by white supremacist rioters.

A supporter of Donald Trump protests outside the Arizona Capitol in Phoenix on Wednesday, Jan. 20, 2021. MUST CREDIT: Photo for The Washington Post by Courtney Pedroza

So when Norma and Sylvia Luna – both Texas teachers – heard Kamala Harris take the oath of office to become America’s vice president on Wednesday, the tears flowed.

“It brings me hope, just watching this. It makes me proud to be an American again,” said Norma Luna, 49, who wore a Biden/Harris mask, Converse sneakers and a string of pearls as she watched the inauguration festivities on a smartphone at the Texas Capitol.

“We feel like we can breathe again,” added Sylvia Luna, 43.

Yet their cause for celebration was a source of angst elsewhere on the Texas Capitol grounds. To Jacob, who came sporting a “TRUMP THAT” baseball cap, the presidency had just been handed to the wrong man after a fraudulent election. “There were just too many inconsistencies,” said the 33-year-old, who declined to give his last name.

The theme of Joe Biden’s inauguration was “America united.” But in the nation’s 50 state capitals – the laboratories of American democracy – there were ample reminders that divisions run deep.

Victoria Walker attends an Inauguration Day event at Manuel’s Tavern in Atlanta on Wednesday, Jan. 20, 2021. MUST CREDIT: Photo for The Washington Post by Kevin D. Liles

The attitudes of those who showed up – either to joyously celebrate or to bitterly protest – were not the only evidence. The National Guard troops, armored Humvees and chain-link fences that surrounded many capitol complexes were added proof that toxic America’s partisanship has recently bled into violence – and could do so again.

“There is a general threat to all 50 state capitols,” said Colorado Gov. Jared Polis, a Democrat, on inauguration eve as he became the latest state leader to activate National Guard troops. Thousands had been deployed to capitals across the country late last week, ahead of a weekend in which potentially violent demonstrations were predicted by the FBI – but never materialized.

Once again on Wednesday, security officials’ worst fears were not borne out: In some states, it was close to business as usual. In others, demonstrations were small and peaceful, with occasionally tense moments.

At Colorado’s Capitol complex in Denver, dozens of “anti-fascist” demonstrators burned an American flag and yelled epithets at police, forcing officers to temporarily withdraw. In Portland, police used smoke bombs during a confrontation with far-left activists. And in Tallahassee, Fla., a Trump supporter and a Biden backer screamed at each other.

“It shouldn’t be like that,” said Molly Siddall, 18, after verbally sparring with a Trump supporter who yelled discredited conspiracy theories about Democrats and pedophilia. “That’s the problem with this country.”

Yet in a nation where the national Capitol was ransacked two weeks ago, the lack of significant strife Wednesday counted as an important step as Biden attempts to turn down the national temperature.

“His aim is to unify us,” said Willy Stokman, a lone demonstrator on an otherwise deserted Utah Capitol lawn in Salt Lake City on Wednesday. “I am hopeful that people and politicians take him up on that, because it doesn’t have to be so divisive.”

In one of the nation’s most evenly split states – Pennsylvania, which voted narrowly for Biden in 2020 after Trump eked out a victory four years earlier – security was tight Wednesday at the Capitol in Harrisburg. But the scene was calm.

Police on horseback and National Guard troops were positioned around the perimeter of the 10-block complex. On the Capitol steps, several Biden supporters waved U.S. flags and signs as a smattering of passing vehicles honked their approval. A lone Trump supporter wore a robe with the words “Impeach China Joe” affixed to it.

Matt Convery, 41, of Wallingford, said he had hoped to take his family to Washington for the inauguration but scrapped that plan after the insurrection on Jan. 6. He said he came out in the bitter cold with his sign reading “Biden” and “Truth over lies” because he watched the video of the Capitol siege and felt he needed to do something.

“I’ve never done anything like this, but wanted to do something for democracy,” he said. “It feels good.”

Across the street, Liz Albayero, 26, was behind the barista counter of the Fix Café, topping lattes with small, foamy pictures of Kamala Harris that she had found on Instagram. It was her own little way to celebrate.

“It’s so amazing to see a woman there,” said Albayero, who came to Harrisburg from her native El Salvador as a student five years ago. “I feel a part of it with her.”

Albayero, who watched on the shop’s television as the inauguration played out, said she is studying for her citizenship test and plans to vote in the next presidential race. She said she is a Harris fan – but Biden’s history is an inspiration, too. “He never gave up – no matter what happened in his life,” she said.

When Jennifer Lopez broke out in Spanish, she laughed, and when Garth Brooks sang “Amazing Grace,” she hummed along.

In Kentucky’s capital, Frankfort, Roger Abner was narrating a different experience. The candidate he had backed, Trump, was jetting to Florida after leaving the White House. And Abner was wondering why there were not more of the 45th president’s fans around to show their support.

“We feel like we don’t have a voice anywhere else since they closed off social media,” said Abner, a 29-year-old construction worker, as he stood outside a heavily guarded Capitol complex. “We actually expected a lot more people like us to be up here,”

Instead there were a few, including Abner and his childhood friend, Curtis Pavlik, 27.

Pavlik, a truck driver, wore a green T-shirt with the letters LGBT – which in this context, the shirt made clear, stood for Liberty, Guns, Beer and Trump. He carried a long steel pole with an American flag obscured by a yellow “Don’t tread on me” Gadsden-flag insignia. The response to the Jan. 6 riot – including attempts to shut down far-right social media networks – had, he said, “instilled fear into quite a few people and that’s why you don’t see a big crowd here.”

Both men had voted for Trump each time he ran, but neither approved of the Capitol riot. “There’s nothing to gain there. You have no plan to take over the government. You couldn’t if you wanted to,” Abner said.

And Pavlik said he will be rooting for Biden’s success.

“I’m not going to wish for him to fail,” he said. “I want him to do what’s good for the country. Do I think that’s what’s going to happen? Absolutely not. Do I want that to happen? Of course.”

At Georgia’s Capitol, Rhonda Beach watched on a smartphone as a president she regards as illegitimate was sworn in.

“All of it was compromised. Every bit of it,” said the 50-year-old. “They didn’t even try to hide that they were stealing it.”

As she spoke, hundreds of police and National Guard members stood watch, having shut down streets for several blocks.

At other capitols, the security presence was barely visible. In Boise, Idaho, normal legislative work went on, undisturbed by any threats to the democratic order.

Steve Ellefson was determined to keep it that way.

“I’ve got to ring this bell!” Ellefson, 70, said as he tried to put all of his weight behind a large bell inscribed with the word “liberty.”

Ellefson sat alone near the Idaho Capitol when the clock struck noon, Eastern time. He could not quite push the bell hard enough to make it ring, but he still celebrated for a moment with praise for the Bidens. He also stood ready to serve his country.

“I am here to protect the Capitol from insurrectionists,” he said.

He had watched the Jan. 6 riot with tears in his eyes, and decided he could help protect Idaho’s legislature from a similar fate. With no threats – or even other people – to be seen, the retired bail bondsman concluded Wednesday that he probably would not be needed. But he was ready, he insisted as he thumbed the pages of a book, any time that changed.

“I’ve got a flashlight, an apple, potato and three cans of pop,” he said, “so if I have to fight, I’ll fight.”