On the third Wednesday in January, Joe Biden sought to put things back in sync with the nation’s history 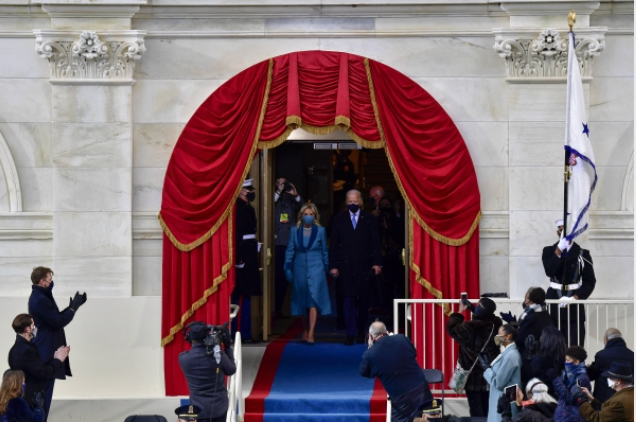 President-elect Joe Biden and Jill Biden arrive on the West Front of the U.S. Capitol for Inauguration Day on Jan. 20 in Washington. Biden became the 46th U.S. president during the ceremony. MUST CREDIT: Washington Post photo by Toni L. Sandys

On the third Wednesday in January, after a first Wednesday of insurrection and a second of impeachment, came an inauguration that promised to be unlike any in American history. In some ways it was. The surrounding atmosphere was haunting, threatening, weird and emotionally charged. Yet in its depth, purpose and artful presentation, what took place during the ceremony on the West Front of the Capitol managed to lift the mood and evoke a sense of reassurance and hope.

As the sun shone at noon, Donald Trump’s presidency was done and gone; Joe Biden’s time had come. He had already taken the oath of office on a five-inch-thick family Bible and was a few minutes into his inaugural address by then. He had just uttered the words “Let’s start afresh.” Those who had been counting down the days and then hours to the end of a toxic presidency could exhale in relief at last. Votes mattered. The system triumphed. “Democracy is precious,” President Joe Biden said. “Democracy is fragile, democracy has prevailed.”

Everything about the inaugural ceremony represented a determined effort to put things back in sync with the nation’s history. The songs, the poem, the prayers, the greetings and oath-takings, a presidential address focused on unity and healing – all were attempts to say this is what America does, this majestic handoff from past to present. It happened, but barely. There was no meaningful handoff from 45 to 46, and the peaceful transfer of power, a notion traditionally evoked to symbolize a resilient democracy, threatened to be a hollow phrase.

There was little peaceful about the transfer. Not after the deadly storming of that very Capitol two weeks ago by an insurrectionist mob invited and incited by Trump in his two-month effort to deny his loss of power through any means necessary, election results be damned. The scars of that deadly riot were still evident in scraped walls and broken windows within a short distance of the inaugural stage. And there was nothing serene about a ceremony taking place within a vast militarized zone ringed by thousands of rifle-toting soldiers and barricaded by high fences, barbed wire, Jersey barriers and hulking army trucks, an armed camp necessitated by what Trump and his conspiracy theory-obsessed true believers had wrought. The National Guard guarding the nation against itself.

It was not even a transfer in any accepted sense. Soundly defeated and twice impeached, Trump abandoned his post and any semblance of traditional decorum by avoiding the inaugural scene altogether, shunning the Bidens, leaving that greeting to a White House usher. After issuing a flurry of midnight pardons, he play-acted his way out of town with a faux-pomp military send-off at Joint Base Andrews in the morning chill, one last petulant act to feed the wounded ego of a shrunken man, so self-aggrandizing that even his vice president declined to be part of it and the paltry assemblage consisted mostly of family and paid staff.

Trump had always longed for a strongman-style military parade, but this leave-taking – with its trappings of a military band and 21-gun salute – before his exile to Mar-a-Lagoland would have to suffice, though it could not match the display of might he unwittingly left behind on the streets of Washington.

Then came an elegant ceremony at the Capitol, an inauguration marked by who was there and who was not. The Clintons, Bushes, and Obamas were there to greet and induct the new first couple into their select club, and the nonagenarian Carters would have been had circumstances not made traveling perilous. Many congressional Republicans were there, including some who had encouraged and endorsed the antidemocratic lie that Biden won only because of voter fraud. Mike Pence was also there, breaking at long last four years of obsequious vice-presidential fealty. Although from a Biden perspective Trump might have been the only person not missed, he was by no means the only one missing. The anxious convergence of a domestic terrorism threat and the year-long contagion of the coronavirus dramatically diminished the throng that in normal circumstances would have flooded into Washington to cheer a new president into office.

When Biden and Barack Obama were first inaugurated as vice president and president 12 years ago, the National Mall teemed with expectant masses stretching from the Capitol back to the Washington Monument and on toward the Lincoln Memorial horizon. This time, although Biden had won the votes of 81 million citizens, more than anyone before, few of his supporters could witness the culminating event of the 2020 election. At the end of a virtual campaign in a virtual year came a largely virtual inauguration. Biden’s crisp and forward-looking inaugural address, his call to “end this uncivil war” and find unity in its place, resounded past a scattering of socially distanced guests below the stage and echoed into the haunting beyond, an eerily silent rectangular expanse artistically filled with 200,000 American flags flapping in the winter wind that were meant to represent the crowd that was not there.

If Biden promised a clean break from the immediate past, with a resolve to lead America out of recession and plague and into a more diverse and equitable future, he did so with the distinction of being the oldest president – 78 at his inauguration. The average age of his predecessors upon taking office was 56, making him 22 years above par, and the two most recent Democratic presidents were far younger than that. Bill Clinton was 46 and Barack Obama 47. Along with age in Biden’s case, unlike Trump’s, came political experience. Biden entered the White House having spent 36 years in the Senate and eight more as vice president, more time accumulated on both ends of Pennsylvania Avenue than any president before him, surpassing even Lyndon B. Johnson in that realm. He was also the first president from the first state, Delaware, and the second who happened to be Catholic, after John F. Kennedy.

A more important breakthrough comes from his vice president, Kamala Harris, the first woman and first person of Black and South Asian American heritage to hold that position. In a nation riven by racism, in an era afflicted by resurgent white nationalism, it was notable that Harris was sworn in by the first Latina justice on the Supreme Court, Sonia Sotomayor, on a Bible that belonged to the first African American justice, the late Thurgood Marshall. The trajectory of racial progress, uneven as it has been, could be traced from there back 160 years to the first inauguration of Abraham Lincoln. Swearing in Lincoln that March day was Chief Justice Roger Taney, the jurist who oversaw the 1857 Dred Scott decision decreeing that enslaved African Americans, even if living in a free state, were not citizens and did not deserve freedom.

Lincoln was inaugurated in 1861 on the other side of the Capitol, on the East Portico, but in many ways the atmosphere then was most comparable to what Biden encountered. Like Biden, Lincoln entered an anxious city in a divided nation. With seven Southern states already split from the Union and threats on his life evident, his inauguration also had a martial feel, the Capitol guarded by a cordon of infantry troops. Lincoln arrived in Washington by train, rolling through Wilmington, Del., on the route from Illinois, but when he reached Baltimore the danger was so great he was secretly switched in the middle of the night to another locomotive. Biden, the ultimate train enthusiast, had hoped to ride the rails from his home in Wilmington into the capital as well, but those plans were scuttled because of the threatening circumstances.

Biden’s public posture since the November election was to convey a sense of calm amid the clanging chaos of the moment. In some quotidian ways, his administration will return to a governing style that exudes old-school normality. Daily news briefings. Intense policy discussions. Decisions based on fact and science. More debates about substance, less posturing and propaganda. Dare to be boring. No governing by predawn Twitter and gut and whim and insult and narcissistic need.

But some things will not be so easy to change. Barack Obama’s first election was greeted by a satirical headline in the Onion newspaper that captured the difficulties of inheriting an economy in free fall: “Black Man Given Nation’s Worst Job.” As Biden entered the White House Wednesday afternoon, he faced Obama’s worries multiplied. Jobs lost by the millions. Businesses shuttered in every city and town. The nation’s children struggling with closed or virtual schools. The medical world battling a contagion that had already taken an unthinkable toll of 400,000 dead. A political opposition that had lied about his election victory and continued to argue that his legitimate claim to the presidency was somehow still illegitimate. All that piled on top of other pressing domestic and foreign policy concerns.

The contrast between past and future was never starker than one moment on the morning of the Final Half Day. At 8:47, after a meandering final speech at the airfield in which he uttered the immortal last words, “Have a nice life, we will see you soon,” Trump, the congenital divider, disappeared into Air Force One, taking with him the nuclear briefcase, which would be his only until noon, suitcases full of grievances that would be his forever, the lowest end-of-term poll ratings of any president since polls have been taken, and a growing consensus among historians that he would rank at the bottom of the presidential barrel.

Seconds after Trump stepped inside the plane, Joe and Jill Biden emerged from their overnight lodging at Blair House. As an irrepressible uniter, Biden was on his way to make his first small unifying effort by convening congressional leaders of both parties at a morning church service at the Cathedral of St. Matthew the Apostle. It was a classic move by a refreshingly optimistic man who promised in his address to devote his “whole soul” to that cause even as he understood that unity was “the most elusive of all things in a democracy.” In today’s political cauldron, what unity meant depended on who was talking and for what purpose.

Back on the frigid January day in 2009 when Obama and Biden were first inaugurated, several hundred people who held purple-coded tickets never got to witness the ceremony, stuck for hours behind a checkpoint that backed them up deep inside the Third Street Tunnel. They huddled and shivered and cried and sang in what became known as the Tunnel of Doom. At noon on Jan. 20, 2021, there was a sense that America might finally be emerging out of a long tunnel of doom of a more dangerous sort. Or not. The future is uncertain, but one thing seemed like a sure bet in the sunlight of a new day. President Biden would not order his press secretary to lie about the size of his inaugural crowd.

1 thought on “On the third Wednesday in January, Joe Biden sought to put things back in sync with the nation’s history #SootinClaimon.Com”