Ministry of Public Health reported on Thursday (September 16) morning that in the past 24 hours there are 13,897 new patients who tested positive for Covid-19, 394 of whom have been found in prisons.

Death toll increased by 188, while 13,527 patients were cured and allowed to leave hospitals.

The other biosphere reserves are Sakae Rat in Nakhon Ratchasima, Suan Sak-Huai Nak in Lampang, Huai Khok Ma in Chiang Mai and the Ranong Mangrove Forest.

The Department of National Parks, Wildlife and Plant Conservation said Unesco’s International Coordinating Council on the Man and the Biosphere Programme held an online meeting on Wednesday to review 22 international areas, including Doi Chiang Dao, for listing as biosphere reserves.

Doi Chiang Dao is located in Ban Pang Ma-O in Chiang Dao district, which is part of the upper Ping River basin, where the ecosystem has been protected by the Chiang Dao Wildlife Sanctuary for four decades. The surrounding area is home to protected animals such as gorals and serows.

The 2,175-metre-high mountain is part of a limestone massif located 6km west-northwest of Chiang Dao town.

Besides the abundance of rare flora and fauna, it is also diverse in ethnic groups such as the Tai Yai, Hmong, Lahu, Lishu and Paganyaw, as well as the Lanna culture.

Doi Chiang Dao is the third most visited ecotourism site in Thailand and one of the most popular birdwatching sites in the country, with more than 300 species of birds, including the rare giant nuthatch and Hume’s pheasant.

The Bangkok Metropolitan Administration, in cooperation with the National Health Security Office, is handing out from Thursday 2 million antigen test kits (ATKs) to Bangkokians who are at high risk of contracting Covid-19.

“The move aims to expand the scope of active case finding in Bangkok,” deputy governor Sophon Phisutthiwong said on Wednesday. “People who test positive can isolate themselves early on, which will lead to efficient control against the virus spreading.”

Each person in high-risk groups that fit the following criteria will be eligible for two set of ATKs:

– Aged over 60, bedridden patients, disabled people, and those with seven underlying health problems.

– Residing in the same house as an infected patient.

– Working as a community coordinator.

NHSO gets ready for nationwide distribution of antigen test kits

Eligible candidates can register via the Pao Tang application and collect their ATKs at participating clinics, pharmacies or hospitals.

Those who do not have a smartphone can head over to participating hospitals to register for their ATKs.

“Those who had already received the ATKs can reapply if they find out later that they are in high-risk groups – for example, if any of their family members or neighbours have just tested positive for Covid-19,” he added.

The country will experience continuous rainfall, with isolated heavy showers in the North, the Northeast, the Central region, the East and the South’s west coast amid a monsoon trough even as a moderate southwest monsoon prevails over the Andaman Sea, the South and the Gulf of Thailand, the Meteorological Department said on Thursday.

It advised people in risky areas to beware of rain water accumulation that may cause flash floods.

The department also advised all ships to proceed with caution and keep away from areas with thundershowers as waves in the Andaman Sea are 1-2 metres high and above 2 metres during thundershowers.

Here’s the weather forecast for the next 24 hours:

Bangkok and surrounding areas: Thundershowers in 60 per cent of the area with isolated heavy rains; temperature lows of 26-27 degrees, highs of 31-34 degrees Celsius.

North: Thundershowers in 70 per cent of the area with isolated heavy rains; temperature lows of 22-25 degrees and highs of 31-34 degrees Celsius.

Northeast: Thundershowers in 60 per cent of the area with isolated heavy rains; temperature lows of 24-25 degrees and highs of 32-34 degrees Celsius.

Central: Thundershowers in 60 per cent of the area with isolated heavy rains; temperature lows of 23-25 degrees, highs of 32-34 degrees Celsius.

East: Thundershowers in 60 per cent of the area with isolated heavy rains; temperature lows of 24-26 degrees, highs of 29-34 degrees Celsius; waves a metre high and 1-2 metres during thundershowers.

South (east coast): Thundershowers in 60 per cent of the area; temperature lows of 23-25 degrees, highs of 31-34 degrees Celsius; waves a metre high and 1-2 metres during thundershowers.

South (west coast): Thundershowers in 60 per cent of the area with isolated heavy rains; temperature lows of 20-24 degrees, highs of 30-33 degrees Celsius; waves 1-2 metres high and over 2 metres during thundershowers.

Only 91 of over 30,000 Phuket Sandbox arrivals tested positive: CCSA

The Centre for Covid-19 Situation Administration (CCSA) announced on Wednesday that of the 32,005 travellers under the Phuket Sandbox scheme, only 91 or 0.28 per cent have tested positive so far.

This announcement was made in a bid to allay people’s fears about infection clusters.

CCSA spokesman Dr Taweesilp Visanuyothin said most of the infections were traced to the Delta variant.

Between July 1 and September 14, 359 flights have landed in Thailand and most of the arrivals were from the United States, followed by Israel, the United Arab Emirates, the United Kingdom and Germany.

The spokesman said the prime minister has instructed tourism authorities to prepare for the high season, which falls in the fourth quarter of the year, and make adjustments in line with the new normal.

All employees in malls and other at-risk businesses will need to be vaccinated by October 1 when the Covid-Free Setting (CFS) measure rolls out.

Department of Health chief Suwanchai Wattanayingcharoenchai announced the move during his visit to check Bangkok’s Siam Paragon mall on Wednesday. The Covid-Free Setting measure is being piloted at the mall this month.

CFS will be deployed in full from October 1, aiding Thailand’s return to normal life after months of heavy restrictions to curb infections.

Suwanchai said starting next month, all employees in Covid-Free Settings (CFS) should be fully vaccinated against Covid-19 and take an antigen kit test every 7 days.

Employees in Covid-Free Settings who have had only one dose of vaccine will need to test negative and undergo a risk assessment before being allowed to work.

Meanwhile, customers who have not had both doses may need to present a negative antigen test to enter malls, said health officials.

Under the CFS measure, shopping malls and other businesses must have a contingency plan to immediately control any outbreaks of Covid-19. All business owners must also make quarantine preparations to ensure speedy isolation and treatment of any employees who contract the virus.

Zuellig Pharma, the distributor and importer of Moderna vaccine, revealed on Wednesday that the manufacturer will be able to deliver the first batch of 1,958,400 doses around mid-October. Thailand will then receive about 300,000 doses per week.

Zuellig Pharma expects to complete delivery of 6 million doses by the end of this year, with the remaining 3 million doses scheduled to arrive no later than March 2022.

Samples from each vaccine batch will be sent to the Thai Food and Drug Administration (FDA) for quality checks before the doses are distributed to private hospitals and the Thai Red Cross Society.

The Government Pharmaceutical Organisation will allocate the Moderna doses according to quotas booked through private hospitals and the Thai Red Cross Society.

Bangkok to accept foreign tourists without quarantine from Oct 15

From October 15, fully vaccinated foreign tourists will be able to visit Bangkok without having to quarantine, authorities said on Wednesday.

The proportion of people vaccinated in all Bangkok districts is expected to reach the 70 per cent threshold for reopening by the end of this month.

Phiphat said all Bangkok districts will open to foreign travellers at the same time.

He added that four other tourism areas – Hua Hin, Cha-am, Chiang Mai and Pattaya – will open on October 1 if preparations go to plan.

On arriving at the mobile vaccination unit, people are screened and asked to sign a vaccination consent form. Their ID card is then verified before they receive a dose of vaccine. They are then monitored for any side effects for 30 minutes before receiving an appointment for their second dose.

City Hall is using vaccination buses to make Covid-19 jabs freely available in the heart of communities, reaching vulnerable citizens who would otherwise be difficult to access.

The BMVs also mean residents don’t have to travel far for jabs, reducing the risk of the virus spreading via public transport. They can also be quickly redeployed to virus hotspots as needed.

BMA’s vaccination buses to roll out next week 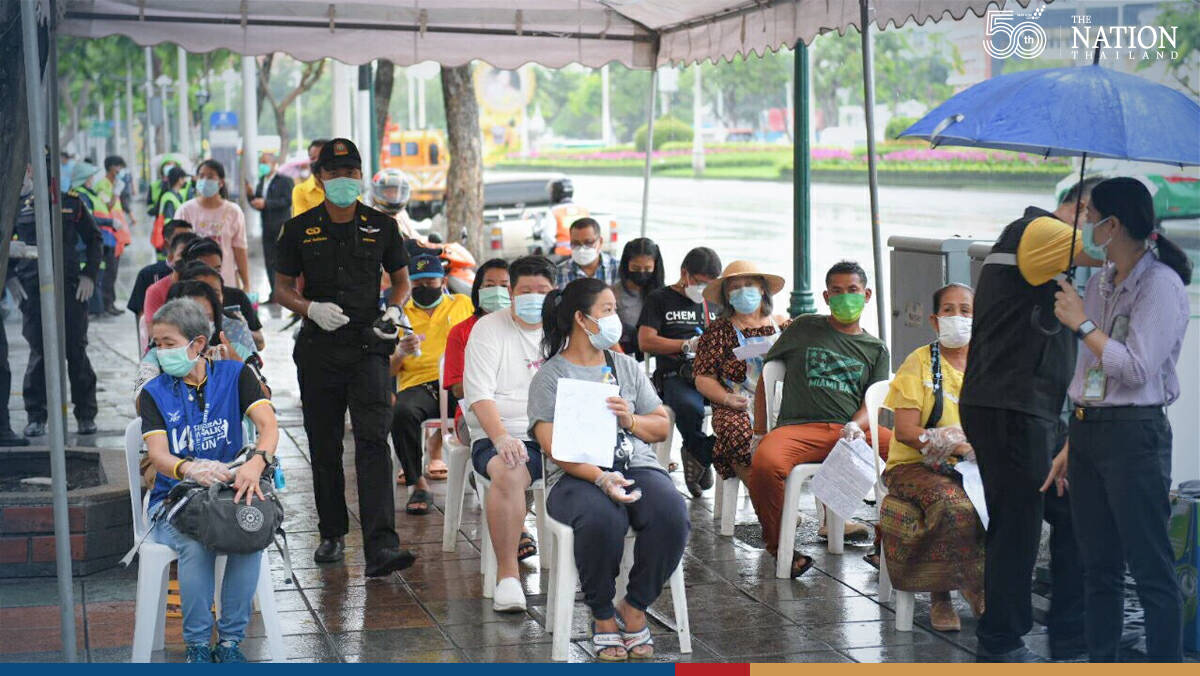 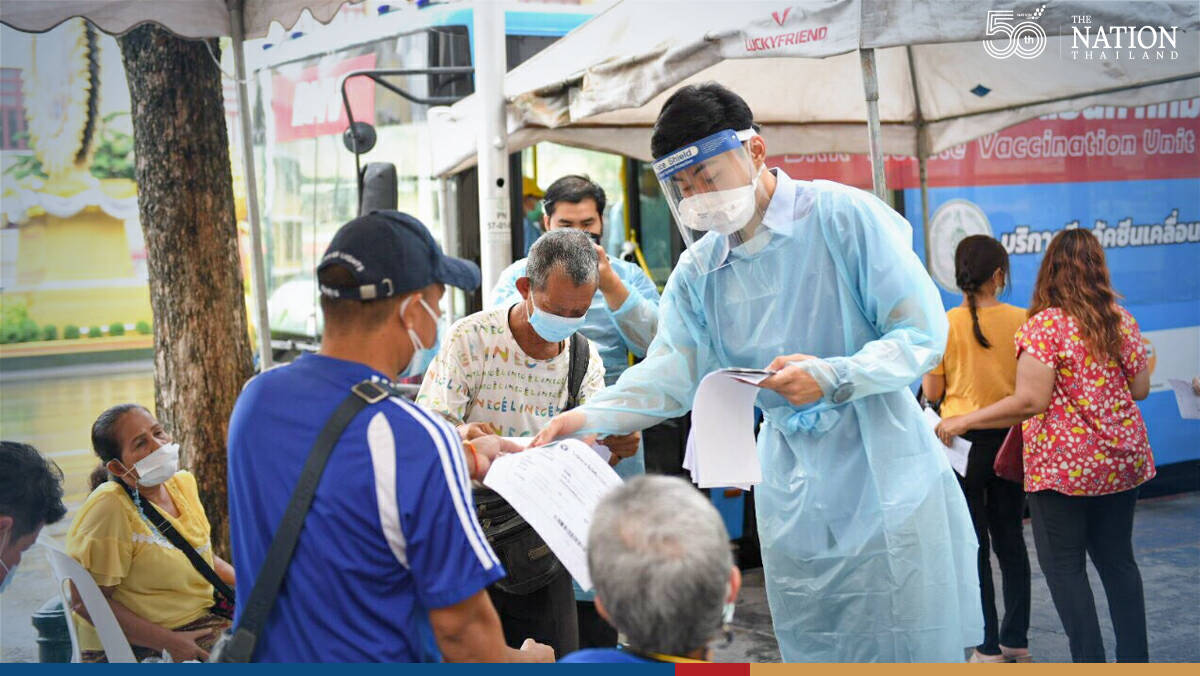 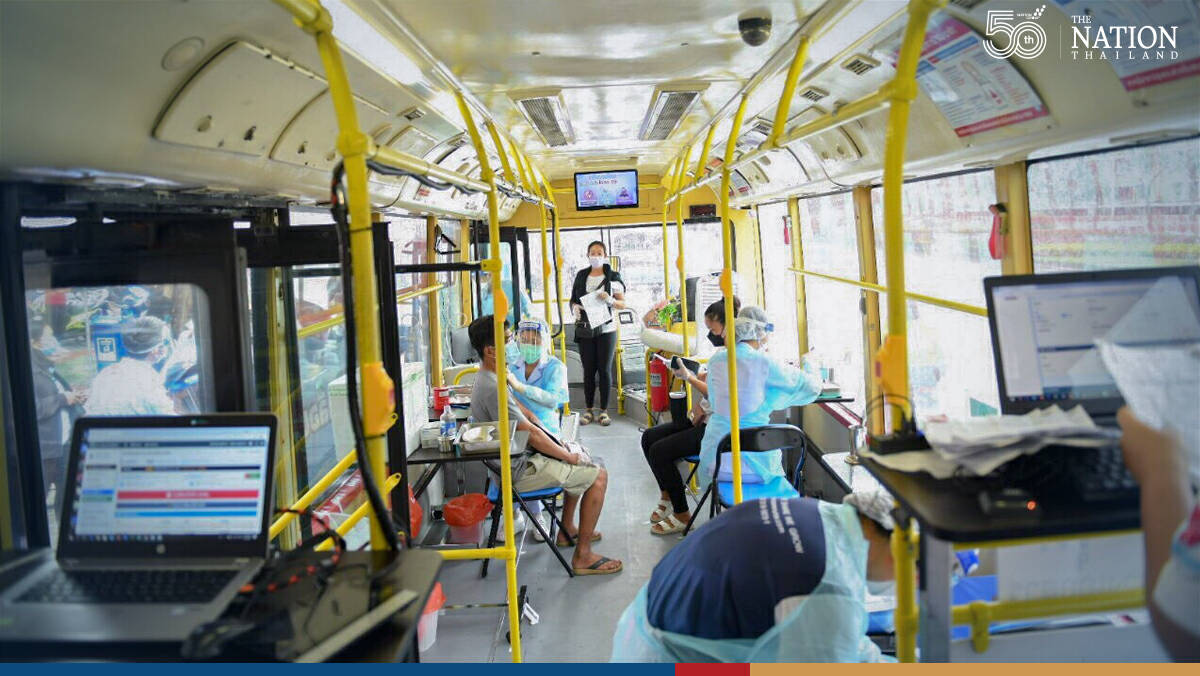 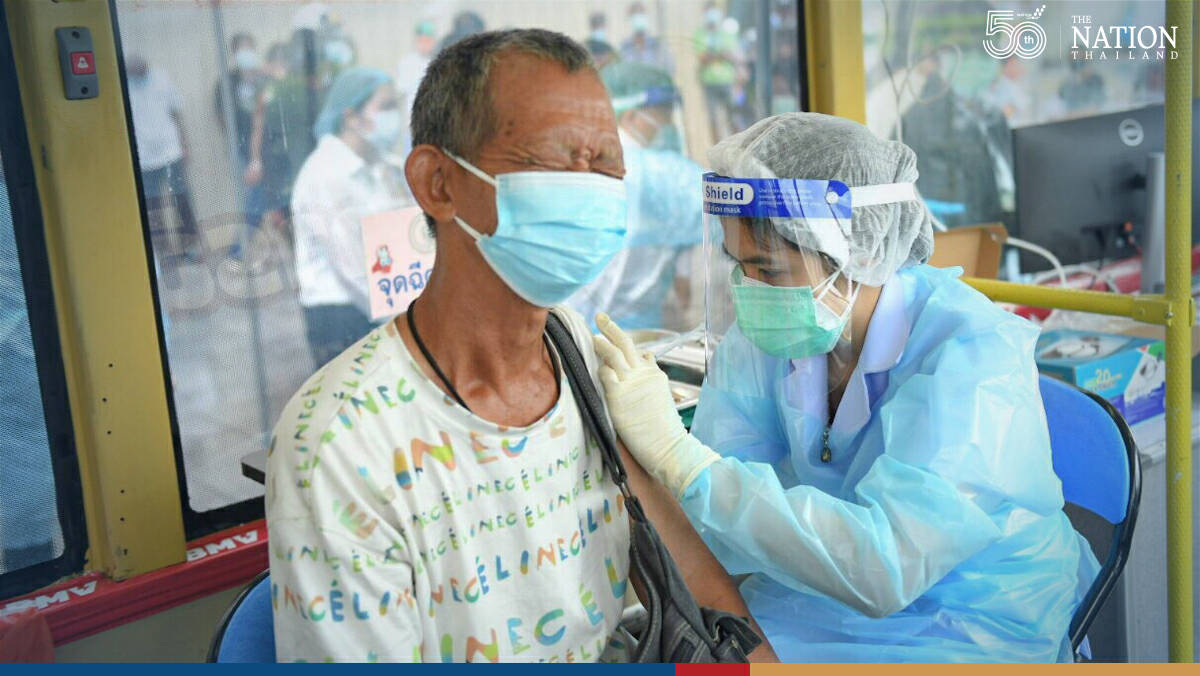 The “taxi graveyard” at the Boworn Taxi Cooperative in Bangkok has been turned into a vegetable garden, staff members planting veg on the vehicles’ roofs.

More than 300 cabbies have returned their cars due to a severe shortage of passengers – another sign of how badly the Covid-19 outbreak has hit the economy. 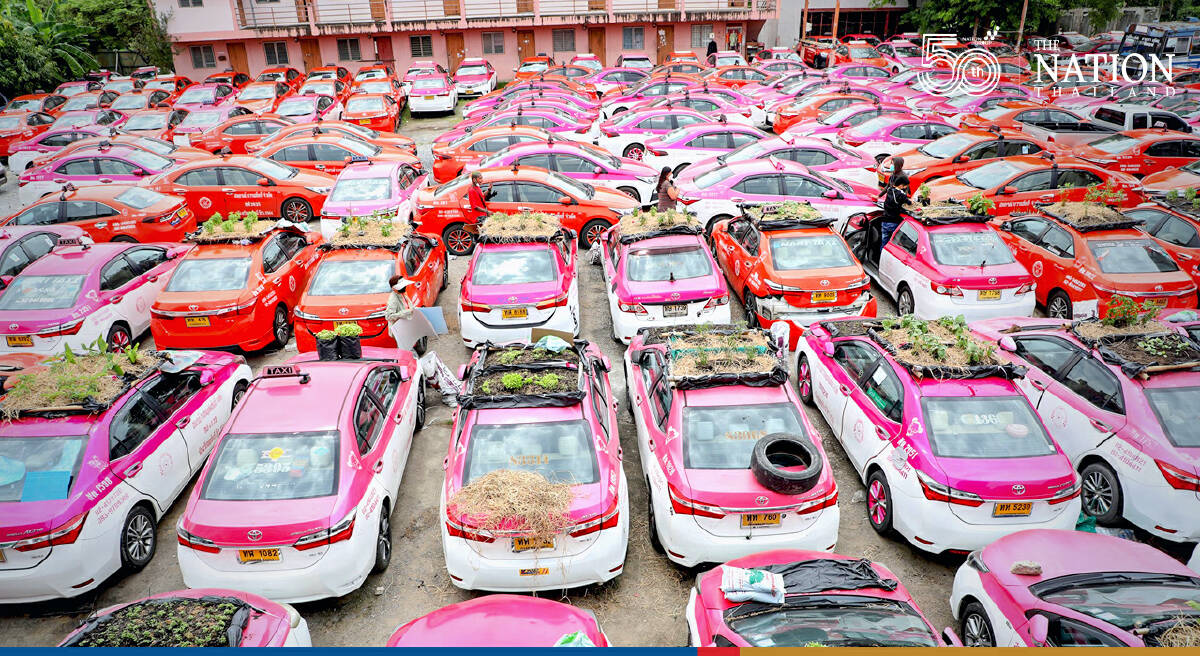 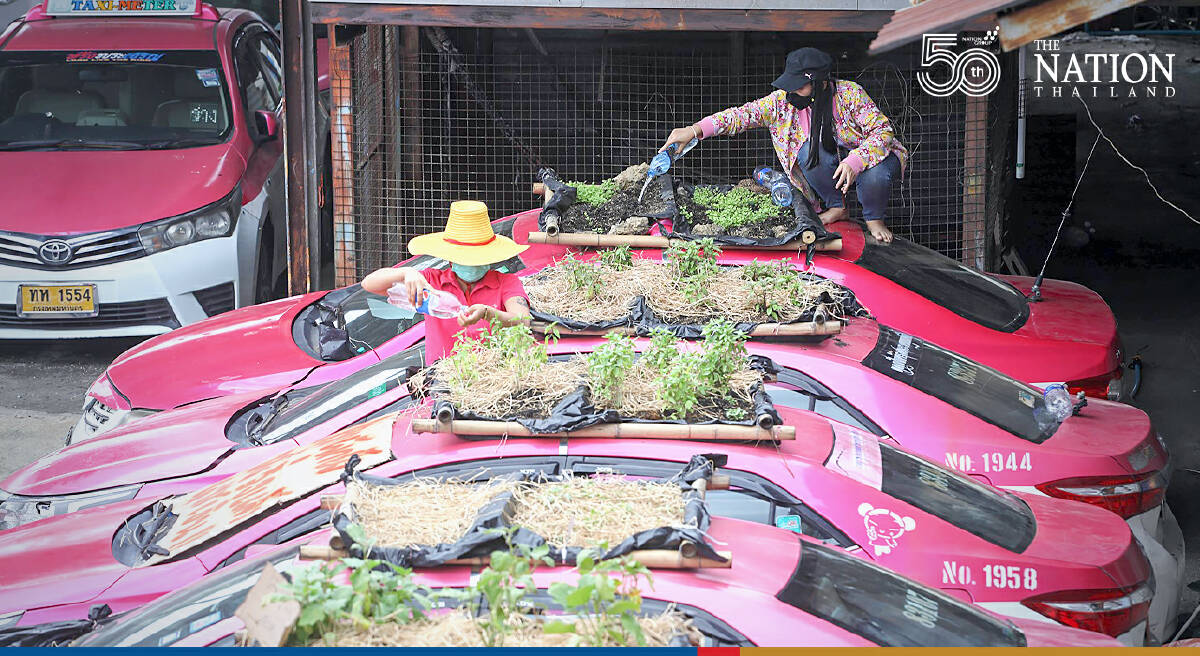 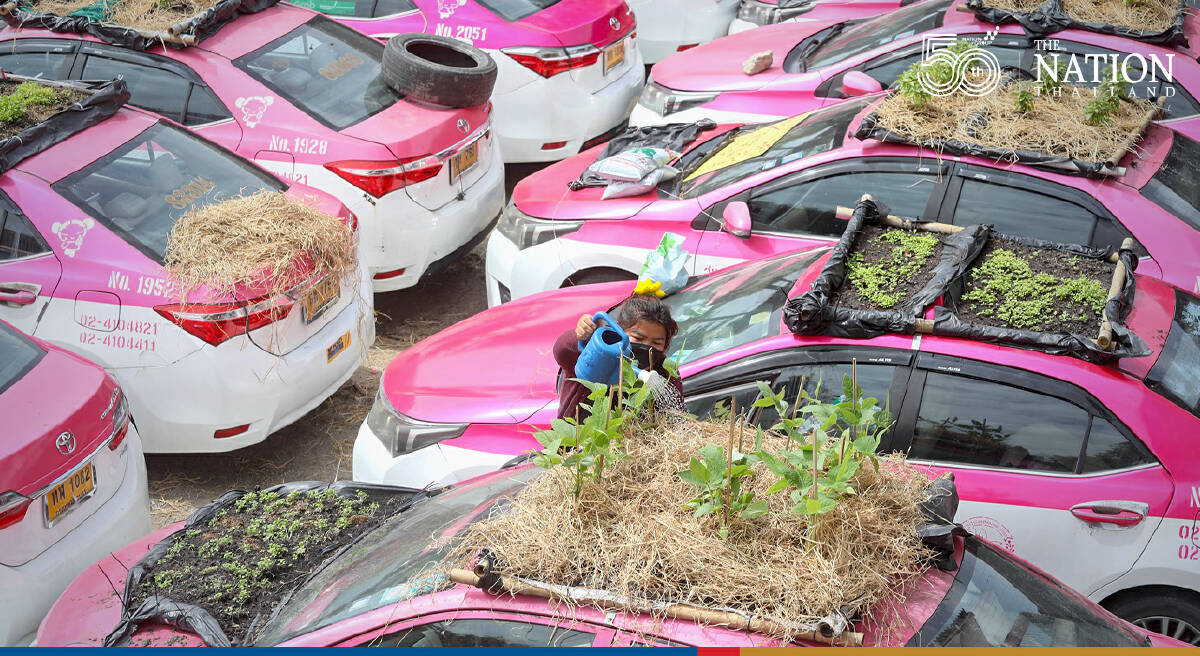 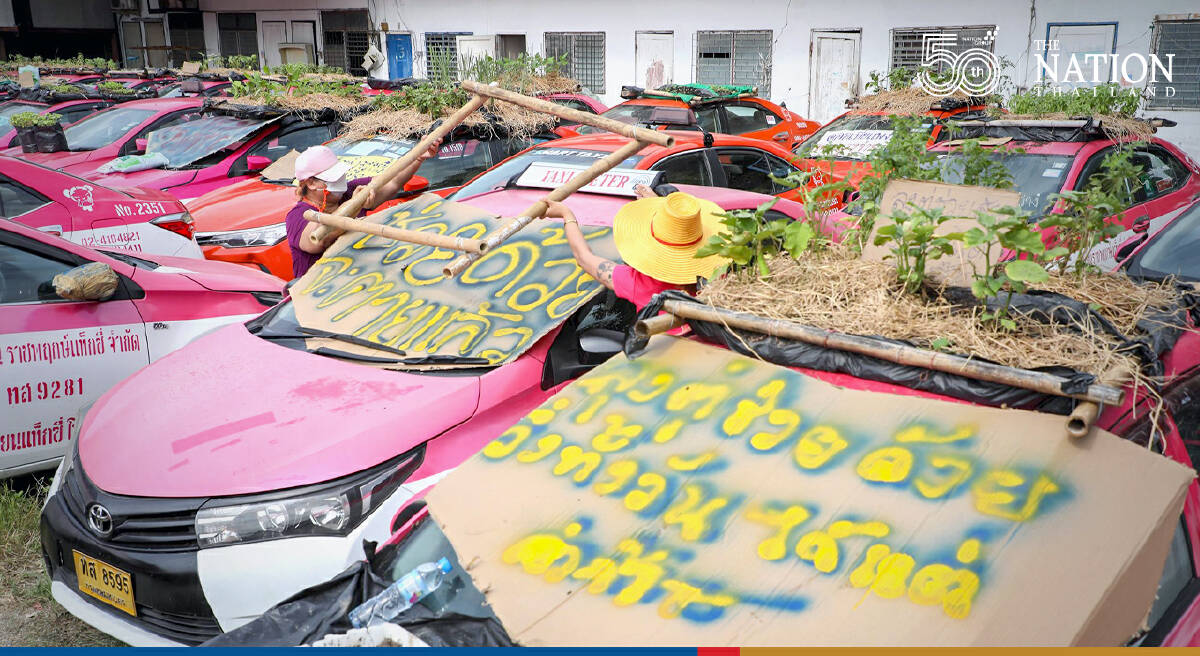