PM to get country’s first Covid jab on Sunday 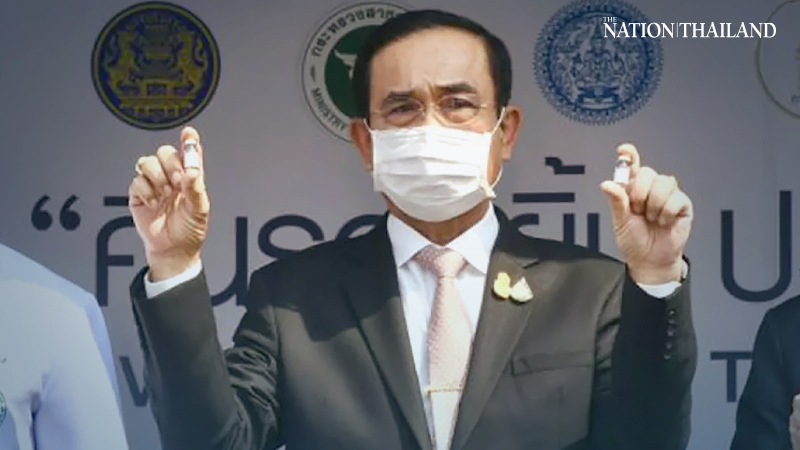 Prime Minister Prayut Chan-o-cha and Public Health Minister Anutin Charnvirakul will get their Covid-19 jabs on Sunday, a day before vaccination is rolled out across the country.

“The PM will be vaccinated at [Nonthaburi’s] Bamrasnaradura Infectious Diseases Institute on Sunday morning,” Sophos Mekthon, chairman of the government subcommittee on Covid-19 vaccines, said on Friday.

Kiattiphum Wongrajit, Public Health Ministry permanent secretary, will be on hand to explain the vaccination appointment procedure to Prayut, he added.

The procedure entails registration with an ID card, a brief physical check-up, signing a vaccine permission form, monitoring for symptoms after vaccination, and making an appointment for the second shot.

“The prime minister will receive the AstraZeneca vaccine in line with the vaccine’s guidelines,” said Sophos.

Members of the public will be vaccinated from Monday (March 1) onwards.

How biosafety units have helped

Covid-19 has infected and killed millions of people across the world since it emerged in Wuhan, China in 2019.

Thailand, however, has been able to deal with the outbreak effectively thanks to biosafety mobile units granted to the government by Their Majesties.

The 20 biosafety mobile units have been effectively used to check people in high-risk areas.

The units were invented by Dr Vip Viprasit from Mahidol University’s Faculty of Medicine Siriraj Hospital. He spent Bt2 million to produce the prototype, before presenting it to His Majesty.

The prototype was tested in collaboration with the Department of Disease Control before Their Majesties provided funds to build another 19 units.

These units have been providing Covid-19 tests free of charge for everybody, even migrant workers.

Thailand received the first shipment of the Covid-19 vaccine, as the pandemic appears to be slowing down in the rest of the world.

He also said the business sector will take at least five years to return to pre-Covid levels.

The number of new Covid-19 cases in Thailand fell below 50 for the first time since the second wave hit the country in December last year, with 45 people testing positive on Friday.

Of them, eight are returnees in quarantine facilities, and 32 picked up the infection while visiting high-risk areas.

Samut Sakhon led with 14 cases, followed by five in Nakhon Nayok, three each in Bangkok, Chai Nat and Nakhon Pathom, two in Saraburi and one each in Prachuap Khiri Khan and Samut Prakan.

Meanwhile, proactive testing led to the discovery of five cases, all in Samut Sakhon.

Of the infected travellers, two are from France and one each from Germany, Bangladesh, Netherlands, Pakistan, UK and Kuwait.

Meanwhile, 218 patients have recovered and been discharged.

As of Friday, the number of confirmed cases in Thailand had risen to 25,809. Of these, 23,056 had been contracted locally, including 14,485 who were found via proactive testing, while 2,753 were returnees.

So far, 24,952 have recovered and been discharged, 774 are still being treated and the death toll remains unchanged at 83. 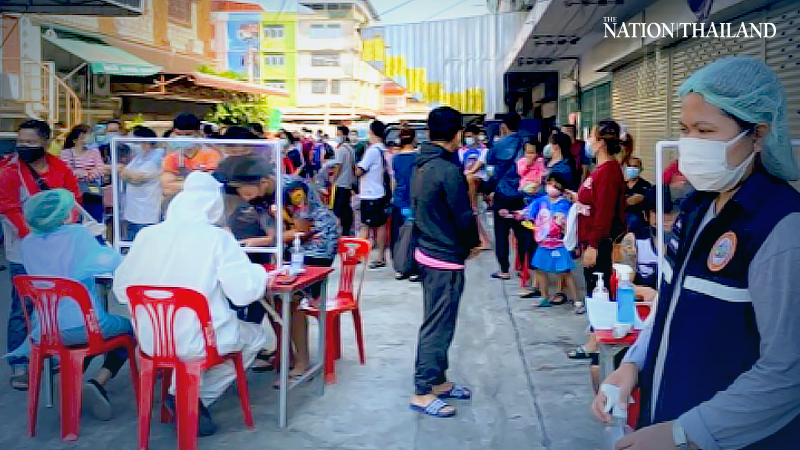 The Pathum Thani public health office on Thursday announced that Pornpat and Suchart markets in Thanyaburi district would be allowed to open effective immediately, while merchants can occupy a maximum of 30 per cent of selling areas so as to promote social distancing.

The two markets had been ordered shut for cleaning and disinfection since February 9 after some Covid-19 cases were traced back there.

The provincial health office had undertaken proactive testing of nearly 20,000 people around the markets and nearby communities from February 9-24, and found 498 people positive for Covid-19, or 2.58 per cent of those tested.

“Most of the infected people showed no symptoms and were Thai merchants in markets and migrant workers,” said the office.

As of Thursday, Pathum Thani has reported a total of 522 patients, 262 are under hospitalisation and 260 have been cured with no fatality.

Airlines get the nod to resume in-flight food and drinks

The Civil Aviation Authority of Thailand (CAAT) on Thursday allowed airline operators to serve food and drinks to passengers, as well as sell souvenirs on board the plane for domestic flights.

The serving of in-flight food and drinks, except for emergency, had been prohibited by the CAAT since December last year in a bid to curb the spread of Covid-19.

The CAAT had also prohibited the distribution of newspapers, magazines or any pamphlets to passengers in-flight except those related to safety, in order to reduce touching surfaces that could spread the virus.

“Airlines still need to strictly follow Covid-19 preventive measures, including having passengers and staff wearing face masks at all times, except when eating or drinking,” said CAAT chairman Suttipong Kongpool.

“Along with allowing in-flight meals, souvenirs are allowed to be sold to passengers on board as well.”

The announcement will be effective immediately.

Ra Ngae Police Station was alerted to a fatal bombing and gunfight incident between patrolling soldiers and suspected insurgents in Narathiwat province at 6.50am on Thursday.

At the scene of the attack in Bor Ngor subdistrict — a forest behind a rubber plantation — police found the bodies of two dead officers, namely Bahari Marusa and Sornram Ratcharak, of the Army’s volunteer scouting units, and one officer, Tiwakorn Boonsaen, who suffered a minor injury. They were sent to Ra Ngae Hospital for autopsy and treatment.

Officers of the scouting unit told police that they were sleeping in tents after patrolling the areas when an unknown number of insurgents threw pipe bombs into one of the tents, and after an explosion they fired at the tent with automatic weapons and fled the scene, resulting in deaths of the two officers and one getting injured.

Police found four unexploded pipe bombs and 30 bullet casings of M-16 assault rifle. The scouting unit also reported that one shotgun and two AK-47 rifles were missing and speculated that the insurgents must have stolen them during the attack.

Officials are searching the areas for clues about the suspected insurgents, but have yet to find anything. 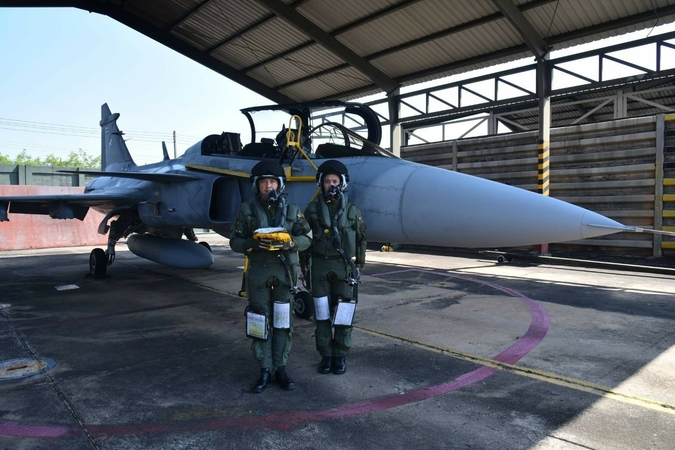 Pilots from Air Squadron 7 of the Royal Thai Air Force brought sheets of gold, silver and copper alloy aboard the JAS 39 Gripen fighter jet on Wednesday and flew above the Gulf of Thailand east of Koh Samui in Surat Thani province.

The sheets of precious metals had been blessed by various Buddhist monks from all over the country, and will later be melted to make statuettes of Prince Chakrabongse Bhuvanath, son of King Chulalongkorn (Rama V) and the founder of Royal Aeronautical Service on March 3 at the Navaminda Kasatriyadhiraj Royal Air Force Academy in Bangkok’s Don Muang district.

The Royal Thai Air Force is planning to build statuettes of the Prince and give them to all air squadrons nationwide to remind its personnel of his work and dedication in establishing the Royal Aeronautical Service, a forerunner to the modern Royal Thai Air Force.

Cool in the morning, hot and hazy during the day in upper Thailand

The Thailand Meteorological Department said on Friday that a thermal low covers upper Thailand, resulting in hot weather with haze during the day in the areas. The morning will remain cool in the upper North and upper Northeast due to westerly winds from the Himalayan range blowing over the areas.

Meanwhile, the weak easterly wind across the Gulf of Thailand causes weak winds and waves over the Gulf and the Andaman Sea.

During February 28-March 3, another moderate high pressure will extend to cover the Northeast and the South China Sea, while the southerly and southeasterly winds bring humidity from the South China Sea to the lower Northeast, the Central, the East including Bangkok and its vicinity. Hot days are forecast over the areas with thunderstorm and gusty winds in some areas.

The weather forecast for the next 24 hours:

North: Cool to cold weather in the morning, hot weather with haze during the day; temperature lows of 15-20 degrees Celsius, highs of 34-38°C; temperature on hilltops is likely to drop to 6-15°C.

East: Partly cloudy and hot weather during the day; temperature lows of 22-24°C, highs of 32-37°C; waves less than a metre high and a metre offshore.

Bangkok and surrounding areas: Partly cloudy, hot weather with haze during the day; temperature lows of 23-25°C, highs of 34-37°C.

Thailand still one of the top choices for post-Covid tourists, surveys show

A recent survey conducted jointly by the Tourism Authority of Thailand (TAT) office in London and global data and market research giant YouGov shed some light on the future of the tourism sector once the Covid crisis is over.

Of the 4,127 respondents, 75 per cent planning to travel abroad said they were willing to be inoculated if required, with the caveat that people above the age of 55 be given preference.

Meanwhile, 41 per cent of those planning trips disagreed with mandatory quarantine measures at destination countries, though 52 per cent said they were fine with up to five days in quarantine.

Of those planning to travel, 62 per cent are above 50 years of age and are considering countries that have had few Covid-19 cases.

Siripakorn Cheawsamoot, TAT’s deputy governor for Europe, Africa, the Middle East and the Americas, said based on this survey, at least 9 per cent or up to 6 million people are hoping to travel to Thailand in 2021.

Another online survey conducted by TAT’s Stockholm office found that 99 per cent of travellers from the Nordic region are concerned about getting infected after travel arrangements have been confirmed.

Of those surveyed, 62 per cent said they wanted to spend this winter in Thailand if there are no restrictions. Their top destinations of choice were Phuket, Krabi and Khao Lak, followed by Koh Samui, Koh Pha-ngan, Koh Tao, Bangkok and Hua Hin.

Separately, a survey in France conducted by the Online Travel Agents platforms, which includes Opodo, eDreams and Go Voy, found that once success with Covid-19 vaccines was announced, visits to tourism websites rose by 15 per cent.

The most searched for destinations were Dubai (49 per cent), Marrakesh (27 per cent) and Bangkok (25 per cent).

A survey in the Americas conducted by MMGY Myriad found that most American travellers did not cancel their bookings, but instead postponed them for seven months to one year. The survey showed that American travellers focused on certificates issued by the World Travel and Tourism Council (WTTC) and the World Tourism Organisation (UNWTO), and most of them were planning to go on solo trips.

“Flexibility to reschedule is the top priority for American tourists, followed by safety. These tourists are looking for safety, no quarantine, flexibility and no deposit,” Siripakorn said.

The Mega Travel Trends report released by media firm Skift Research showed that the travel industry will only recover in 2023 and will only return to pre-Covid levels by 2025.

Vaccinations for high-risk people to commence in March: Bangkok governor

Bangkok Governor Aswin Kwanmuang announced on his Facebook page on Thursday that the capital would from March start vaccinating the first batch of people considered to be at high risk of contracting Covid-19.https://www.youtube.com/embed/gsWsZThzHfw?rel=0

Aswin visited Bang Khun Thian Geriatric Hostipal on Thursday to check if the hospital was ready for vaccinations.

He would check the “readiness of the whole operation”, right from start – in which the elderly and medical personnel would be injected – to finish, in which those vaccinated would be allowed to return home, he said.