The third edition of the Crown Prince Camel Festival were held from Aug. 8 to Sept. 11 on the Taif Camel Field in Makkah Province, Saudi Arabia.

Camel racing is a popular traditional sport in the Arab world. Camels good at racing are known for having specific features such as light weight, small palms, large chest size, long legs and long tail. 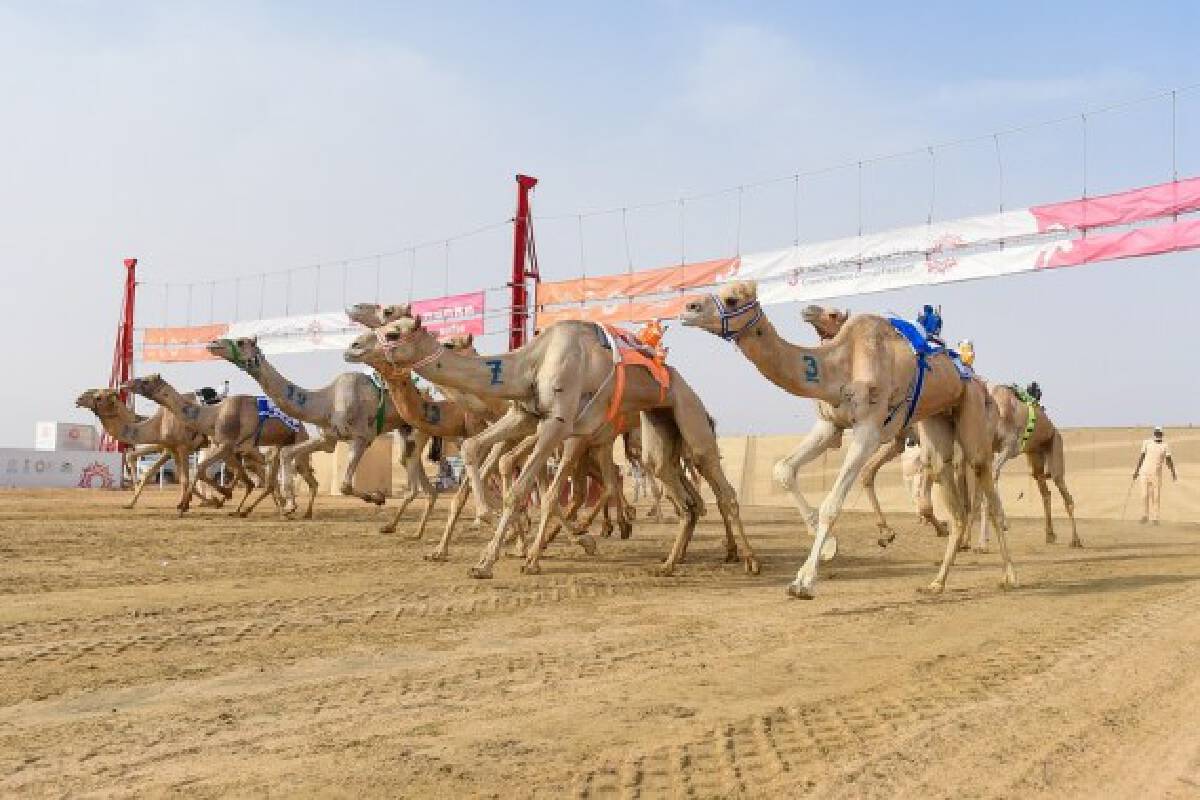 A camel is seen at the Crown Prince Camel Festival held in Taif, Saudi Arabia, Sept. 10, 2021.

A camel is seen at the Crown Prince Camel Festival held in Taif, Saudi Arabia, Sept. 10, 2021. 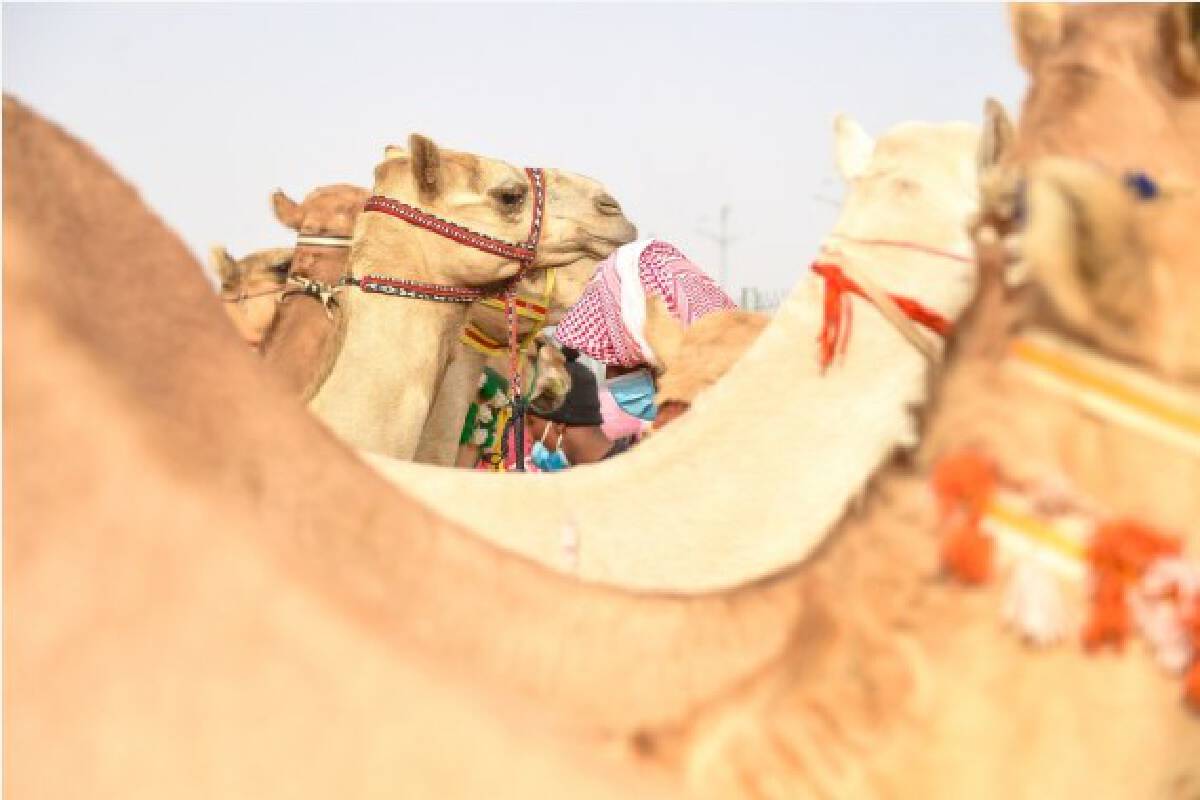 Lisa, is a Thai rapper, singer, and dancer based in South Korea. She is a member of the South Korean girl group Blackpink under YG Entertainment.

Lisa is the only Thai member of the group, and the new song is her first solo, which her fans had been waiting for.

Apart from the entertaining song rendered in the modern South Korean style, “Lalisa” incorporates numerous Thai elements that surprised and impressed Thai audiences, such as Thai-language signs, costumes, and even the background location.

The elements were praised by social media users in Thailand, and became a hot topic of discussion.

Most netizens praised the music video producers for adding this element. However, some conservatives found the costume inappropriate, as they believe a traditional dress should be used only in a traditional way, not in a contemporary situation.

Many were reminded of the concert of American artist Lady Gaga in Thailand in 2012. The pop star was attacked then by conservatives and the Culture Ministry for wearing a traditional headpiece during the concert.

In addition to the discussion on suitability, the costume topic led to informative posts on social media about types of headpieces in Thailand, as well as about the countries that had inspired the pieces.

In the scene, Lisa wears a controversial traditional costume, with a background inspired by Khmer temples.

The most believable interpretation was that the palace in the scene was inspired by the Phanom Rung temple in Buri Ram province, Lisa’s hometown.

Buri Ram is located in the south of Thailand’s Isaan region, which in the past had been influenced by the Khmer kingdom.

Another much-discussed situation from “Lalisa” was a scene showing Lisa with dancers dressed like armed police. Social media users, especially those closely following Thai politics, believe the scene was inspired by the current conflict in Lisa’s home country. Some even interpreted the scene as a “call out” action of the artist herself.

Some netizens were mocking in their response, calling the crowd-control police the most Thai element in the music video.

A hidden gem in Pattaya

The Khon Mask Museum in Pattaya’s Nong Nooch Tropical Garden does not just give visitors a chance to check out its collection of 506 masks, but also offers a demonstration of how they are made.

The Khon Mask Museum, nestled in Pattaya’s Nong Nooch Tropical Garden, does not just display a variety of Khon masks but also demonstrates how they are made.
Established in 2017, the museum now boasts 506 masks – 24 ancient ones, 108 related to Thai beliefs and 374 for characters of the Ramakien – Thailand’s version of the Indian epic, Ramayana.

Kampon Tansacha, president of the company that owns the garden, said the museum was built in line with his mother’s wishes to preserve Thailand’s national art.

“My mother wanted the tropical garden to serve as a learning centre for Thai people. We believe children should be brought here so they can learn about this art form,” Kampon said.

Khon is a traditional Thai dance-drama genre and is believed to have been created in the 1600s. It was generally performed in royal courts and its distinctive feature is that the mask covers the performer’s head completely.

The next project is to build a museum showcasing Thailand’s traditional puppets.
The museum will open once the Covid-19 situation has eased. 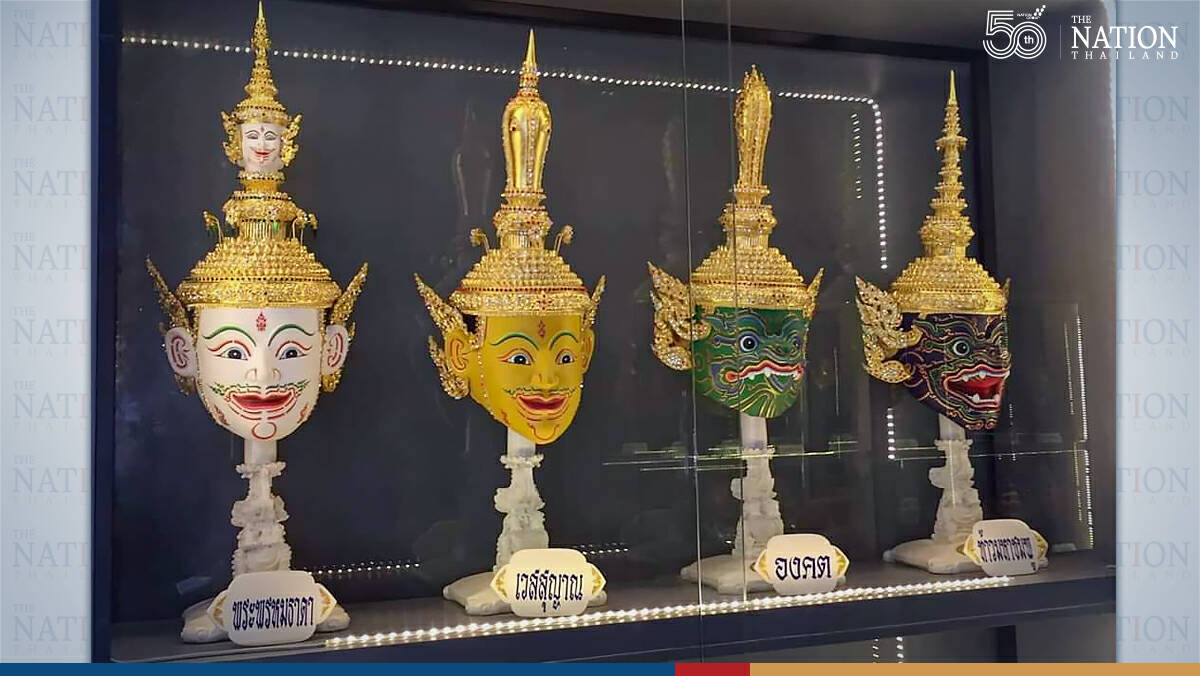 Full moon seen over Temple of Poseidon in Greece

A full moon is seen over the Temple of Poseidon at cape Sounion, some 70 km southeast of Athens Saturday night. 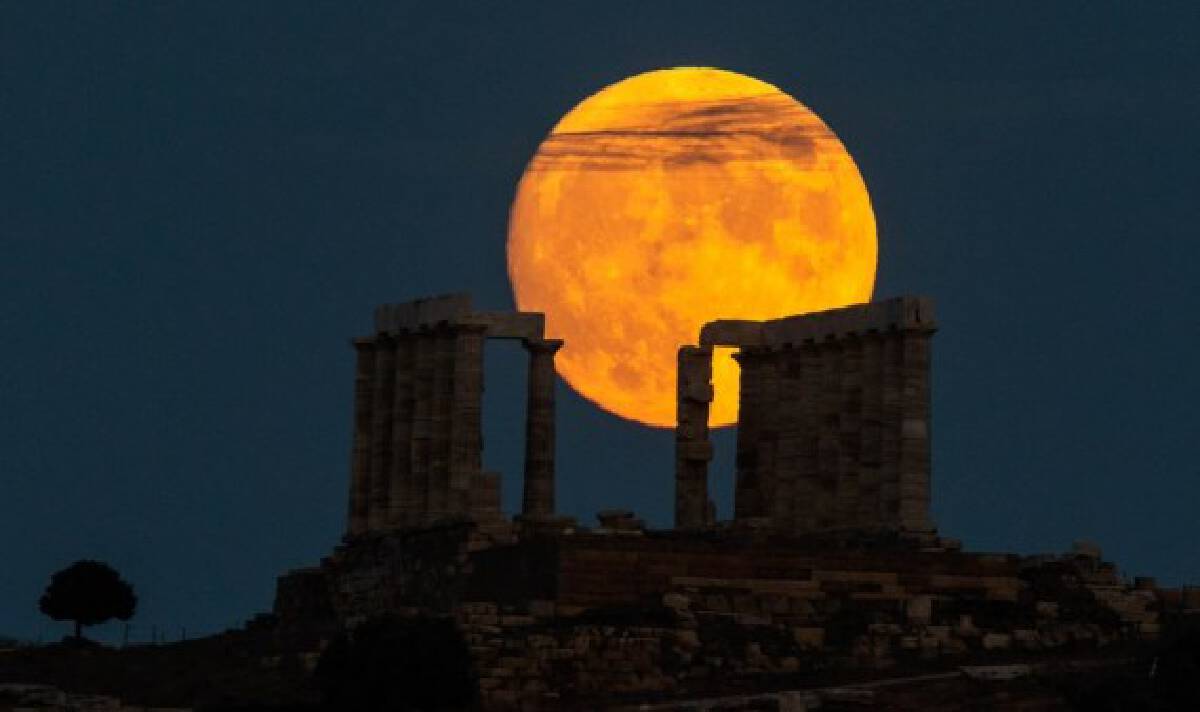 Rescuing an Asiatic Golden Cat trapped in a snare

We are taking you to see how an Asiatic golden cat, which was trapped in a snare, was rescued by third patrol officers of Kaeng Krung National Park in Surat Thani province, during a patrol mission.

Asiatic golden cats are a gravely endangered species, as their bones and skins are sold by traffickers.

In Thailand, there is a stiff penalty for offences under the Wildlife Preservation and Protection Act of 2019. Offences against reserved animals are punishable by three to 15 years of imprisonment, or a fine of THB300,000 to THB1,500,000, or both. For possession of protected wildlife and carcasses of wildlife, imprisonment is for not more than five years, or a fine of not more than THB500,000, or both.

Asia Album: Take a trip to historic city of Ayutthaya in Thailand

The historic city of Ayutthaya, located in Thailands central Ayutthaya Province, is one of the World Heritage Sites with a long history and cultural heritage, which is the inheritance and continuation of Thailands civilization. 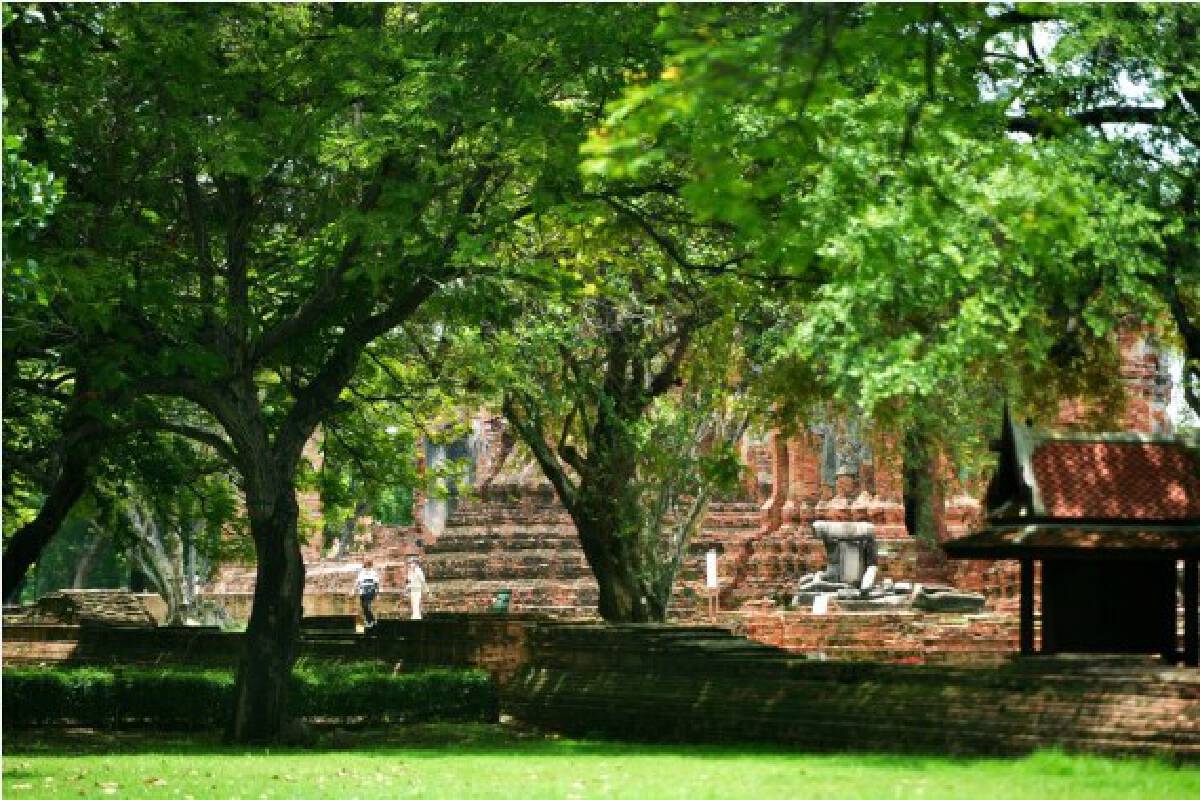 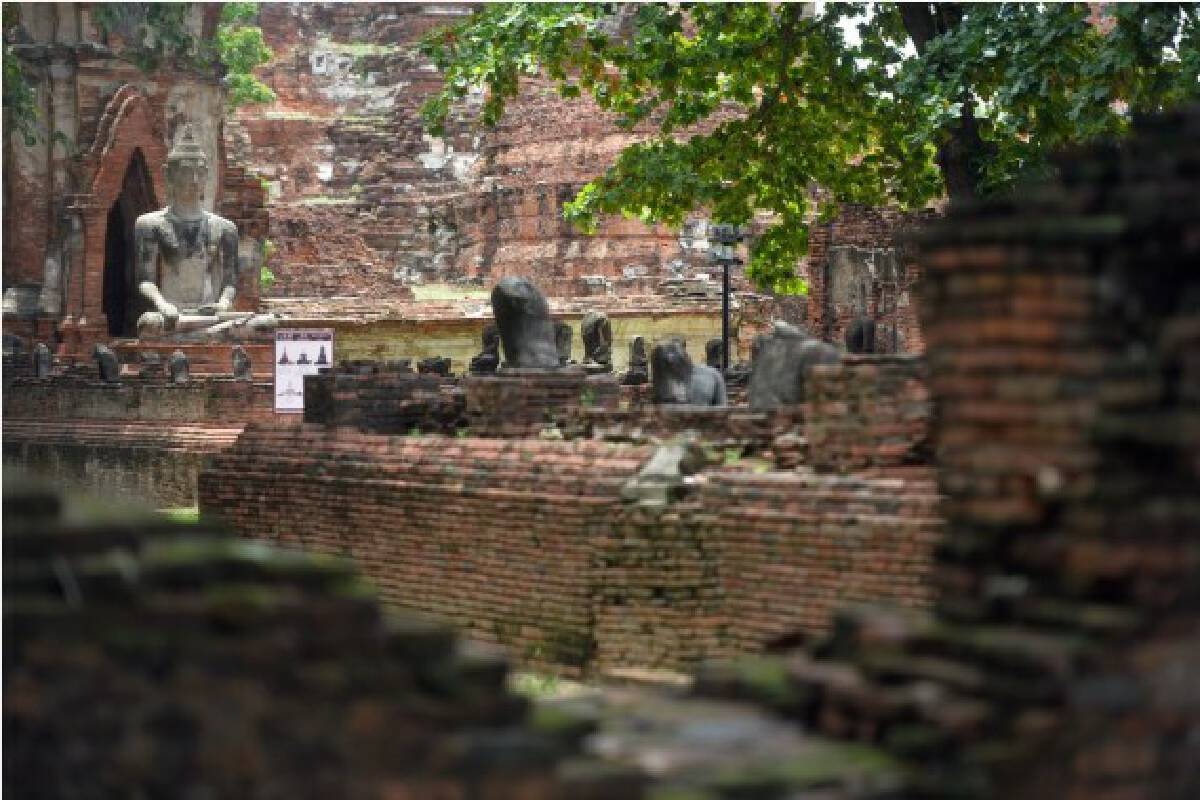 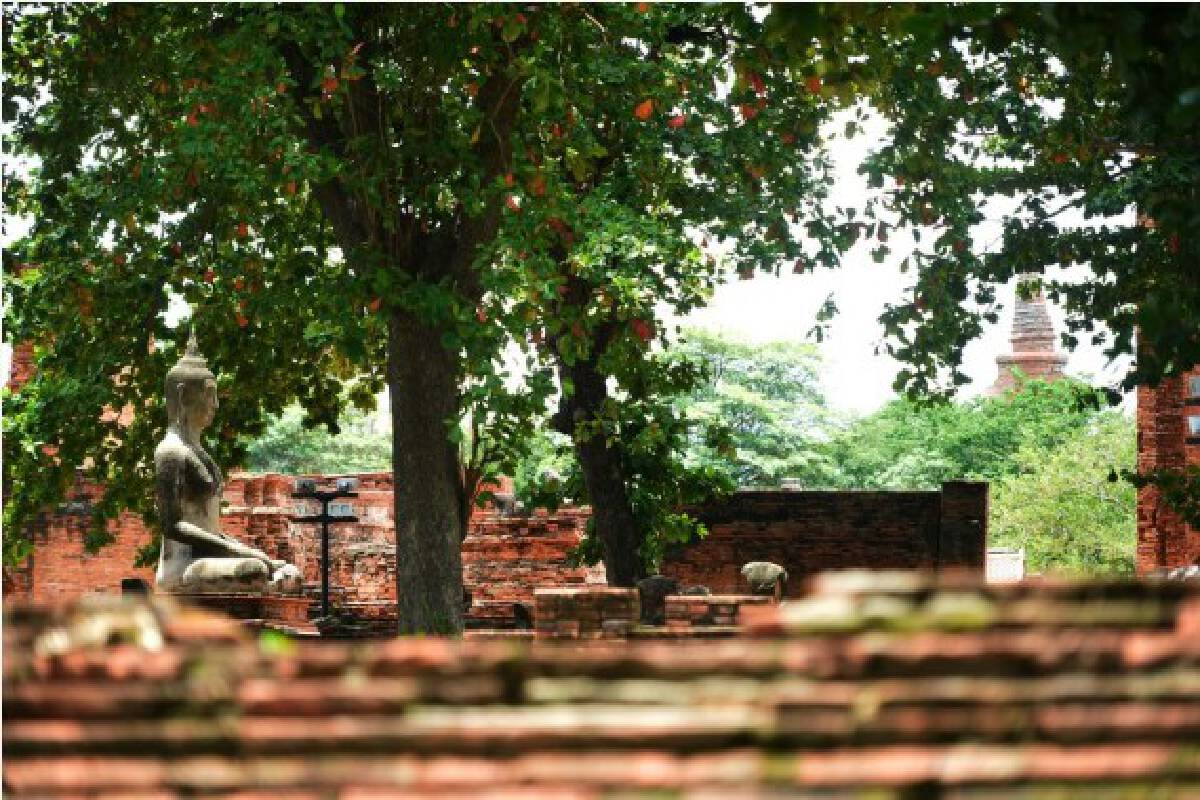 A royal elephant in Sri Lanka, carrying the Tooth of the Buddha and protected by the government, is going on a 10-day journey to participate in the Kandy Esala Perahera, also known as the Festival of the Tooth, which is scheduled from Aug. 14 to 24.

The festival is one of the grandest Buddhist festivals in Sri Lanka, with the elephant parade being one of the biggest attractions. 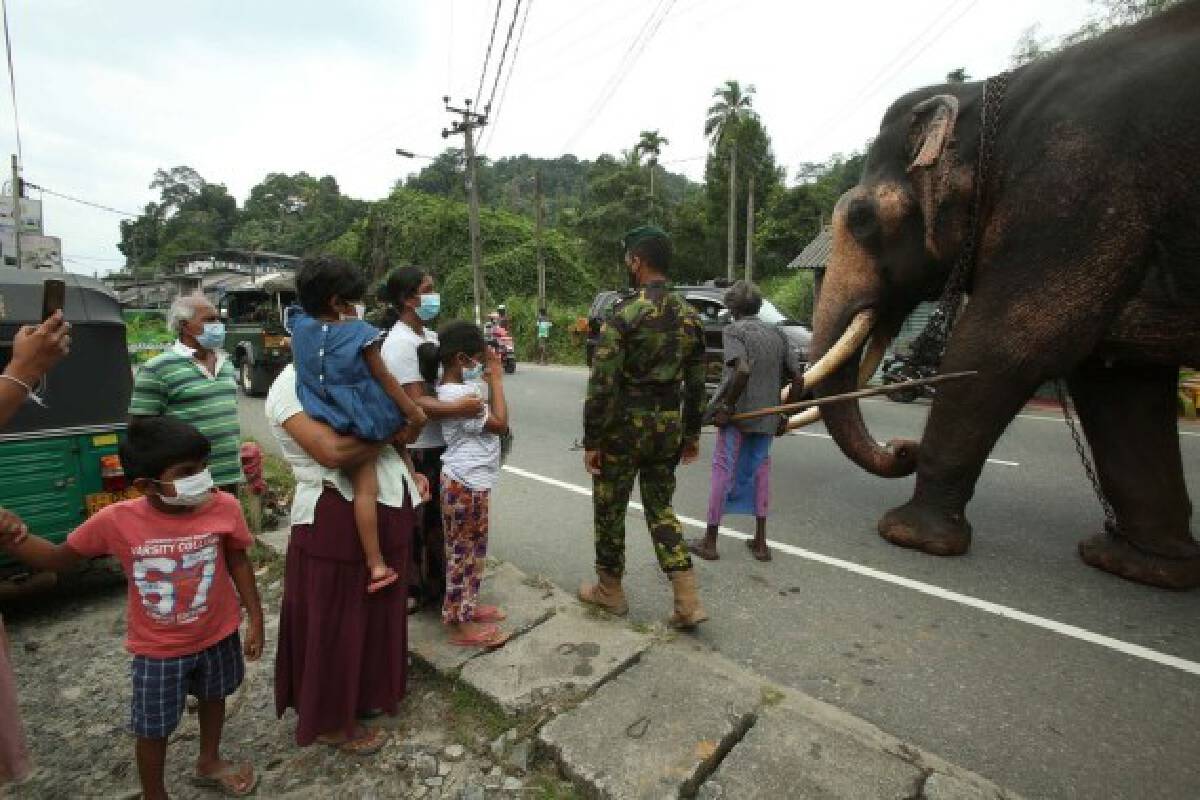 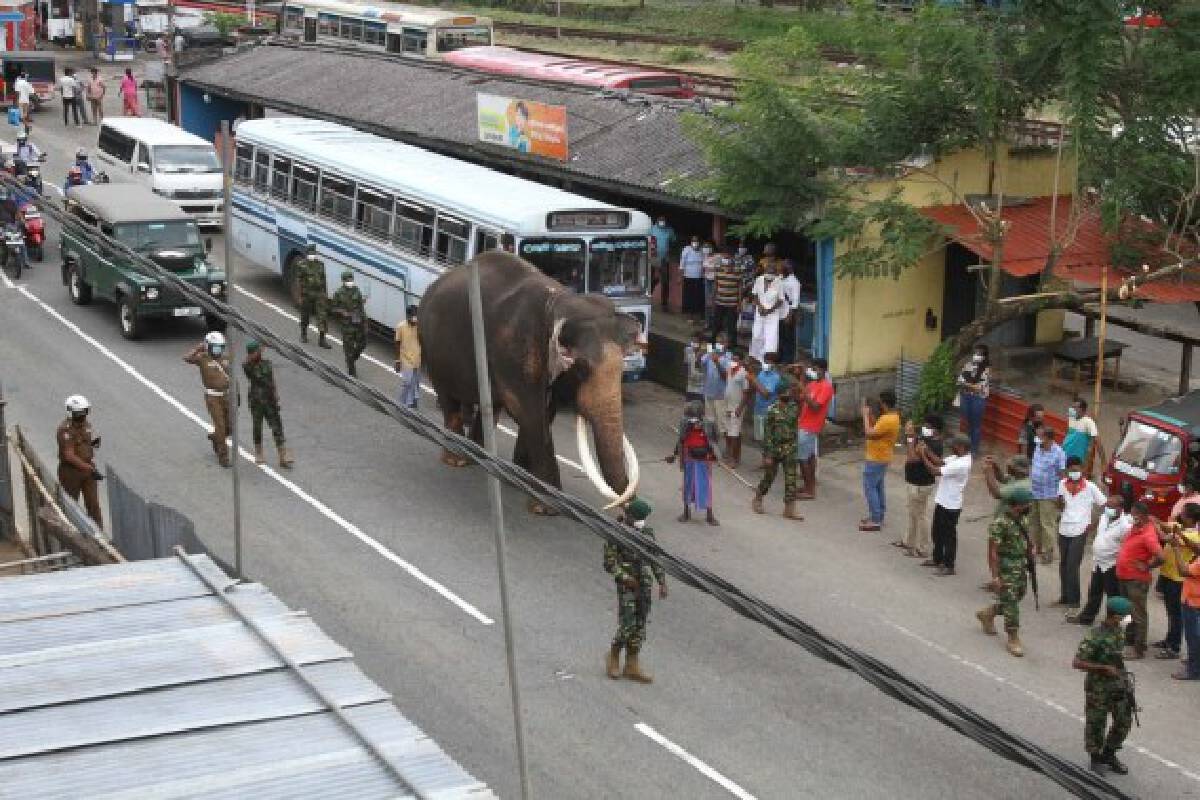 A lump of coins, dated to 1,700 years ago, was discovered on Israels west coast, the Israel Antiquities Authority (IAA) said Wednesday.

The six-kg coin lump was found at the HaBonim Beach in the eastern Mediterranean, about 25 km south of the northern city of Haifa, the IAA said.

The coins were found about 70 meters from the water, where in ancient times was a natural mooring used as a shelter for ships during storms, or for night anchoring.

The coins were probably bundled in a cloth bag, and it is still not clear from which metal they were made of.

“As a result of the oxidation in the marine environment, the coins merged together into a large lump,” the researchers explained.

Given the large number of coins, they appear to have fallen from a wrecked ship, and were intended for trade, according to the IAA archaeologists. 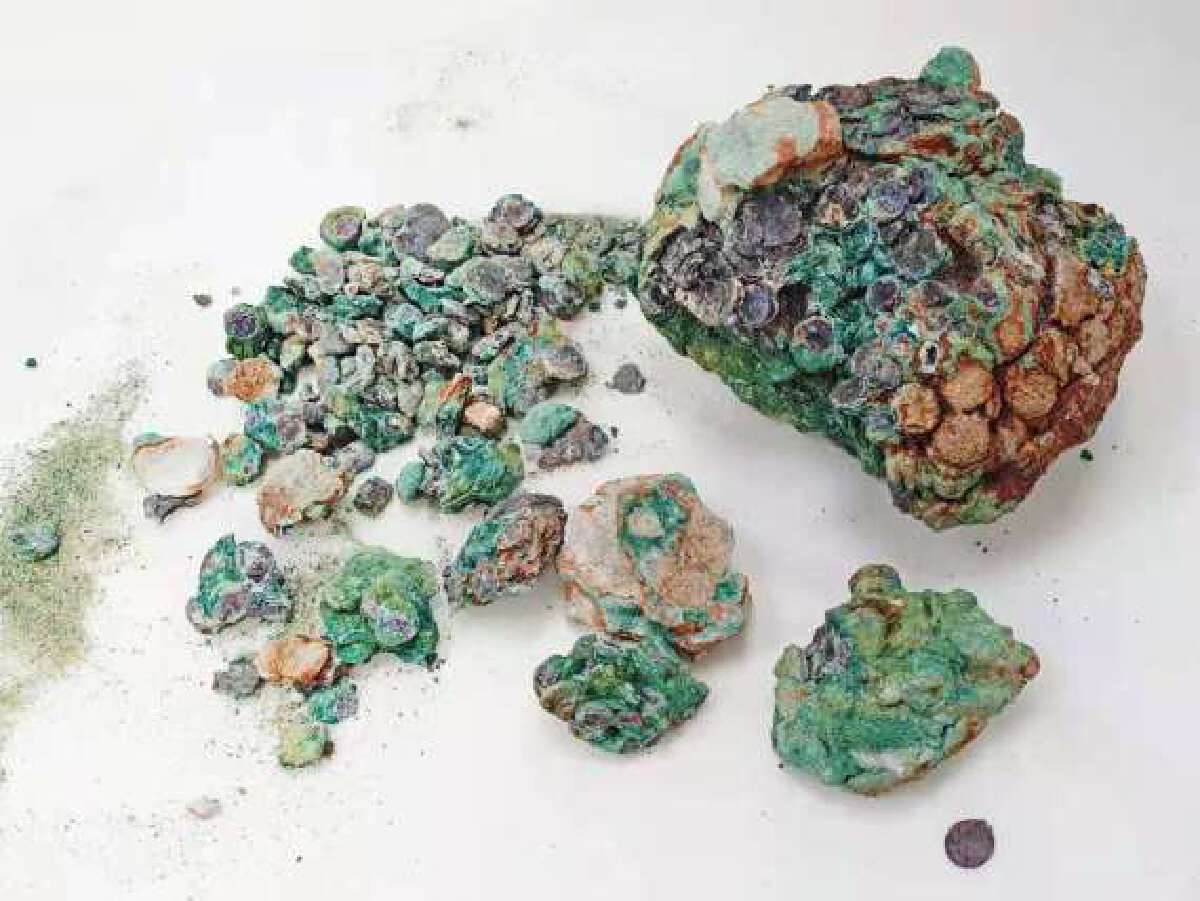 Photo shows the 1,700-year-old coins found at the HaBonim Beach in the eastern Mediterranean, about 25 km south of the northern Israeli city of Haifa.

Photo shows the 1,700-year-old coins found at the HaBonim Beach in the eastern Mediterranean, about 25 km south of the northern Israeli city of Haifa.

A 14-year-old Thai student in New Zealand had a dream-come-true moment when he received birthday greetings from that countrys prime minister.

Pawares Arnupapbangerd, a student of Rongotai College, was not able to travel home to celebrate his recent birthday with family due to Covid-19 restrictions.

He said that although he enjoyed being in New Zealand, he has been missing home, especially on his birthday.

He decided to do something to make it special; he wrote an email to New Zealand Prime Minister Jacinda Ardern, saying his 14th birthday dream was to receive birthday greetings from the country’s leader.

His email caught the attention of the prime minister, who read it and sent a letter wishing him a happy birthday – making his birthday a very meaningful one. 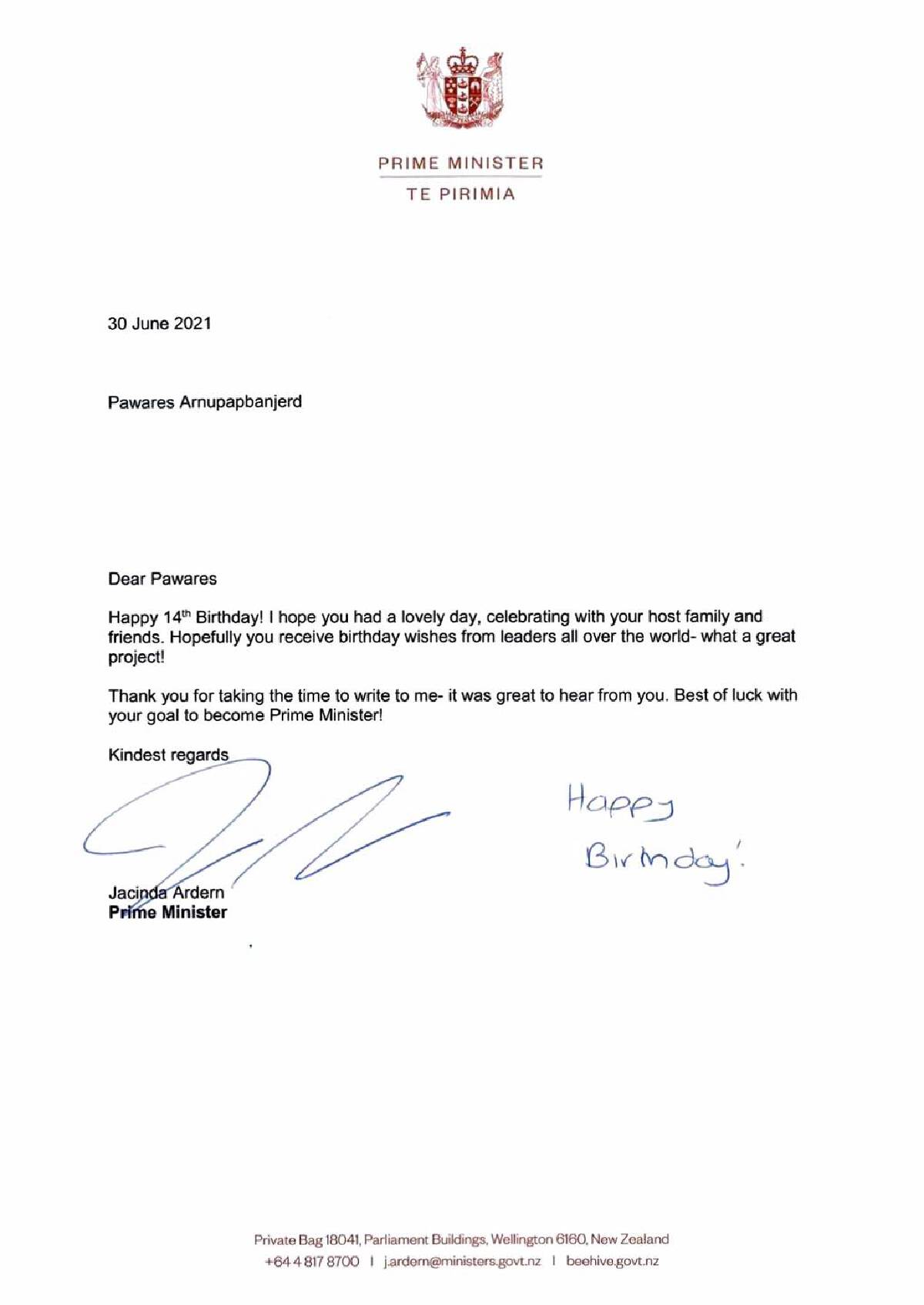 2018 Grand Prix bronze medalist Jutamas Jitpong is aiming for an Olympic medal after she tamed Irish Magno of the Philippines 5-0 in the second round of the womens boxing 51kg at the Kokugikan Arena on Thursday.

The 23-year-old Thai was familiar with her opponent, having sparred with the Filipino during training in Nakhon Ratchasima ahead of the Games. She relied on her knowledge of Magno’ style to dictate the fight with accurate blows and left hooks that won her a unanimous decision.

The 2019 SEA Gamers bronze medalist from Nakhon Si Thammarat became the second Thai to reach the quarter-finals of the Olympic Games TOKYO 2020, following in the footsteps of Chatchai-Decha Butdee in men’s 57kg division a day earlier.

“I was quite confident going into the fight because we trained together and I never lost to her. I could box at will and did everything according to my plan,” said Jutamas, who only took up boxing four years ago.

“Actually, it’s been tough for us as we barely had any warm-up tournaments because of the COVID-19 situation. Some of us were a bit rusty at the beginning,” added the world No 11. 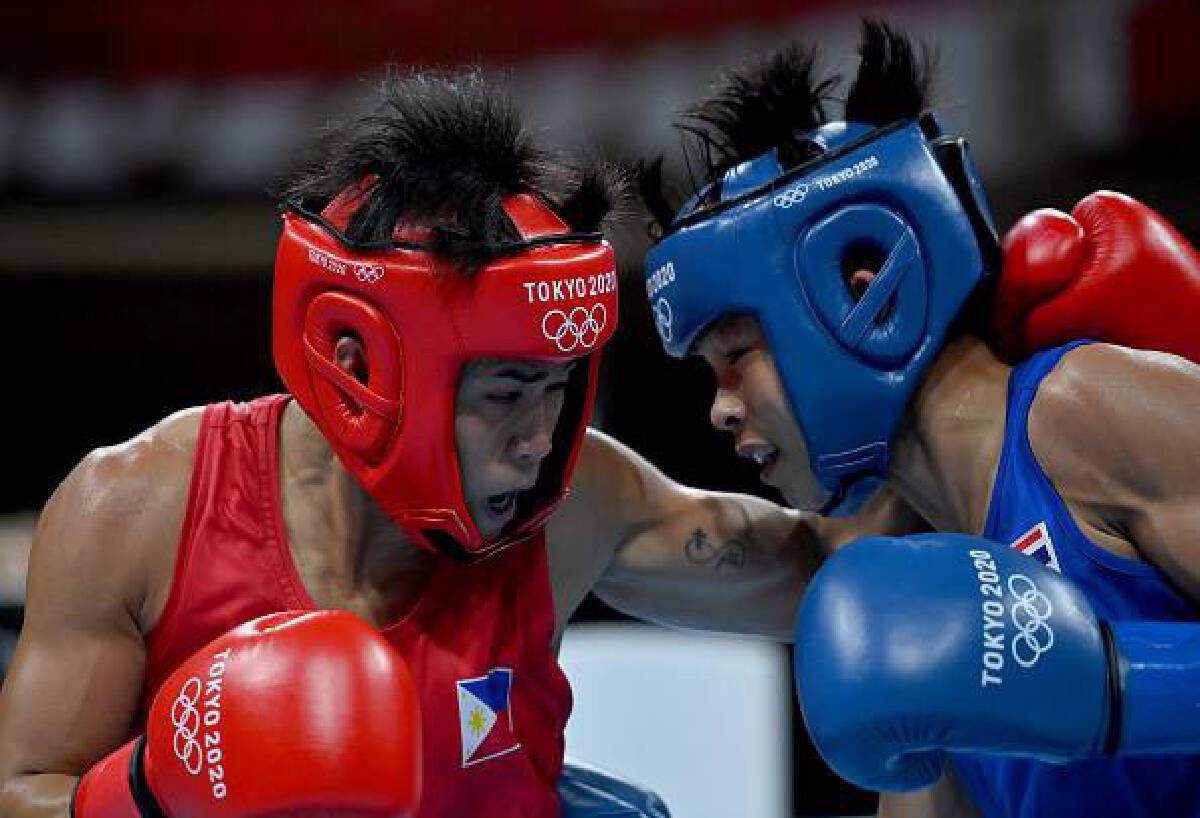 Up next for Jutamas is top seed Buse Naz Cakiroglu of Turkey, who beat Tursunoy Rakhimova of Uzbekistan 3-2. Jutamas is eyeing revenge against the Turk, who won their only previous encounter. Victory will earn the Thai at least a bronze medal.

“I lost to her in a close fight in the Czech Republic. I think she was more dangerous back then. Now, I’m quite confident and I will try my best to get an Olympic medal,” she said.

In shooting, 58-year-old Svate Sresthaporn, after a strong start on Wednesday, missed three targets and had to settle for 17th place with 121 points in the men’s trap competition, losing his chance to reach the final.

In the women’s 25m air pistol precision shoot, Tanyaporn Prucksakorn shot 290 points, six behind leader Zorana Arunovic of Serbia, to stand at 13th among 44 competitors. Naphaswan Yangpaiboon fired 287 for 30th place. They will compete in the rapid shoot on Friday for a place in the final round.