Ariya finishes with her best position of the season.

Ally McDonald, on her 28th birthday, headed off the 18th green after the final round at Reynolds Lake Oconee to champagne showers from friends and family after becoming a Rolex First-Time winner on the LPGA Tour at -16. The four-year Tour player said she was proud of the resiliency she showed through the final holes to win by one stroke over five-time LPGA Tour winner Danielle Kang.

“I’ve never doubted my ability, but I’ve definitely questioned whether I would be able to win out here. It’s really hard to win out here,” said McDonald. “So I’ve just really hung in there and tried to stick to my process since day one. That was able to get me in the winner’s circle today. I’m really thankful.”

McDonald started the day alongside rookie Bianca Pagdanganan and Kang in the final grouping, with Kang carding the first birdie of the group at No. 2 to gain a stroke on the leader. McDonald answered with a birdie of her own at No. 4, to which she credits as the momentum-starter for her day. The Mississippi State alum would then par the rest of her front nine, as Kang bogeyed No. 5 and birdied No. 4 to make the turn two shots back.

McDonald would then stick it to 15 feet on the par-4 10th to make her first of three consecutive birdies through No. 12, despite not feeling too confident on the approach shot on No. 11. “I didn’t hit that great of a shot on 11. I feel like I executed my game plan, but we didn’t carry it far enough for it to take that slope down,” said McDonald. “That was definitely not a putt that I was looking to make. It was just one that I was trying to nestle down to the hole, but executed great speed, great line, and just so happened to go in.”

Kang would inch back into the picture with birdies on No. 11, 13 and 14 to get to -15 heading into No. 15, one back of McDonald at -16. But a bogey at No. 15 set her back as McDonald’s nine-foot birdie putt dropped on No. 16. Though she bogeyed the next at No. 17, McDonald said she never lost touch with her initial game plan, and knew she had to finish strong by taking it “one shot at a time.”

“I didn’t really panic just because I knew — I thought I hit a really good putt on my first putt. Just carried a little bit too much speed and kind of power lipped out,” said McDonald. “Yeah, like I said, I didn’t really know where I stood, but I thought I might have had a couple clear. So I just went back to my game plan with executing my routine.”

It came down to the 18th hole, as Kang’s eagle chance almost landed in the hole, went out three feet and spun back, barely missing the cup as it grazed the lip. Kang ultimately putted for birdie, finishing in solo second at -15. After her par putt dropped, McDonald, emotions aflutter, felt relieved.

“It’s very fulfilling for me to finally get that victory. I won’t say over the hump or anything like that because it’s really hard to win out here,” said McDonald. “I’m just going to continue working really hard and try to even get No. 2 after this one. But I’ll definitely soak this in. I’m just really grateful and blessed that I play on the LPGA Tour and am able to do what I love to do every single day.”

Pagdanganan, in the first final grouping of her young Tour career, parred the first 16 holes as the battle between McDonald and Kang raged on, closing with two birdies on her the final holes to finish -14 in solo third. After a final-round 67, Mina Harigae ended in a tie for fourth, her second top-10 result in the last three events, with Carlota Ciganda, at -13.

“I feel great. I was hitting it really well this week, my driver especially. I think I only missed a couple fairways all week,” said Harigae, who only missed two fairways this week in Greensboro. “I wish I made a little more putts on the first day, but they came together the rest of the time. It’s been great.” 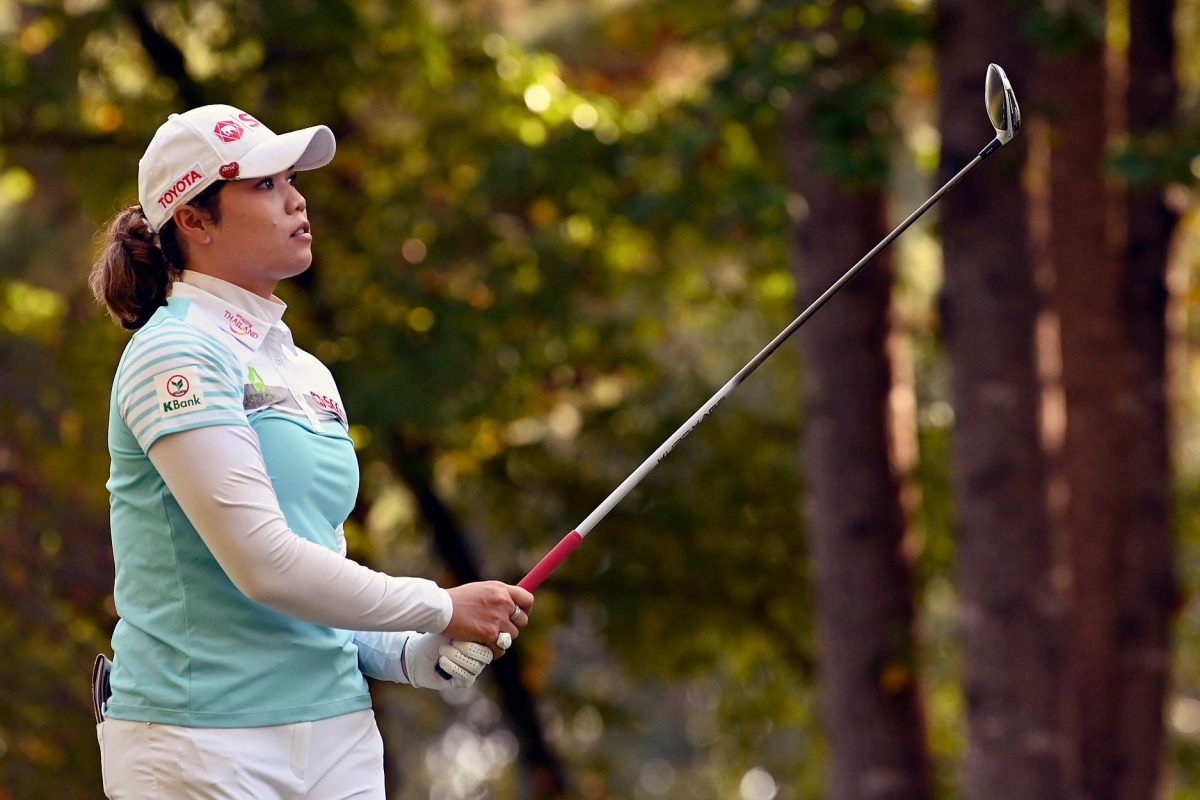 Ariya Jutanguarn and Katherine Kirk recorded their best results of the season with a tie for sixth at -11, as last week’s Symetra Tour champion Matilda Castren, 15-time LPGA Tour winner Lydia Ko and Brittany Altomare rounded out the top 10 in a tie for eighth at -10.

Faith is the center of Ally McDonald’s life. Always has been. So, it came as no surprise when, minutes after capturing her first win at the Drive On Championship, she stepped to the microphone on the 18th green of the Great Waters Course at Reynold’s Lake Oconee and said, “I can’t stand up here without, first and foremost, telling you that Christ Jesus is amazing in how he was able to just calm me during these times. And He was no doubt with me, the third member of our team out on the golf course today in giving us this win.”

That brought another torrent of tears from McDonald’s mother, Angie, who held it together, not just this week but through all the ups and downs of Ally’s professional career, until the final putt fell. It was Angie who, in years past, had Ally’s blood-sugar monitor synced to her phone. Ally is a type-1 diabetic and requires constant monitoring. For years, if things got out of whack, Angie received an alert. She was also the one who got a call in the middle of the night – every parent’s nightmare – when Ally had a seizure half a world away in Malaysia and spent a week in the hospital with severe dehydration.

Angie and Ally’s dad, Jamie, have been by their daughter’s side through it all. They hoofed every step and bore every heartbreak. They celebrated when their daughter won the North and South Women’s Amateur and enjoyed the congratulatory hugs and handshakes when she won Mississippi State’s home event, the Old Waverly Bulldog Invitational. Ally was the pride of Fulton, having learned the game on a nine-hole golf course and became a college All-American. She even represented her country as an amateur in the 2014 Curtis Cup at St. Louis Country Club where Angie and Jamie walked every step and celebrated a U.S. victory.

They also hurt for their daughter when the wins everyone expected in the pros were slow to come. They had to find the right words in Scotland when Ally was on the verge of capturing the point needed for the U.S. Solheim Cup victory at Gleneagles until Bronte Law went on a putting tear that turned the tide.

They were also there to celebrate her friendships and her recent marriage to Charlie Ewing, a golf coach at Mississippi State.

But since she joined the LPGA Tour, they were never able to be celebrate her birthday. October 25 has always fallen in the middle of the Asia swing, so the McDonalds could only celebrate through video chats. That changed this year with the best present any of them could receive.

“Well, that was the play, to be honest,” said Danielle Kang of her near eagle on No. 18 which would have forced a playoff with winner Ally McDonald, who parred the hole.

“I thought I hit a good drive but looked up and it just kind of veered right. Then I saw it kick right and then I took a little while over that shot because I had to make a decision whether to go for it,” said Kang, who finished solo second at -15. “My wedges are really good, so I said I can’t guarantee on-the-green shot, even if I’m long enough to try and chip in. Let’s just lay it up to a number I like. Laid up to a number I like and I tried to hole-out.”

Currently ranked fifth in the world, a win on Sunday would have been the third for Kang this season and the second at a “Drive On” event. Despite a few bogeys on the card, Kang said she is happy with the result. With three weeks of break ahead for all players before the next Tour event at the Pelican Women’s Championship presented by DEX Imaging, Kang’s plan is to relax and recoup.

“I think I just need to take a few days off right now. My back has went into a spasm a few days ago. So it was a little difficult this week to play with it. I think I’m very proud of how I played despite not having my full game, but Ally played wonderfully and it’s been a really great week,” said Kang.

Ahead of Bianca Pagdanganan’s 23rd birthday on Wednesday, the 2020 LPGA Tour Rookie said she is already living her dream. Heading into the final two rounds at Reynolds Lake Oconee beside veteran players, like Ally McDonald and Danielle Kang, Pagdanganan said it was a surreal moment, as she remembered all those she looked up to when she was young.

“Growing up definitely Annika Sorenstam and Lorena Ochoa. They were the top players when I was growing up. But I also had some local players to look up to–Jennifer Rosales who played on Tour when I started to play golf,” said Pagdanganan, who finished in third at -14. “But being at this level and just being able to compete with the greatest players, it’s so much fun.”

Now inspiring younger kids herself, the Filipino cannot reiterate enough how lucky she feels to be where she is. Of course, her hard work was what got her here.

“I say this a lot, but I really do get to live my dream. If you told me a couple years ago that I would be playing on the LPGA Tour and be in this position in my rookie year I probably wouldn’t believe you,” said Pagdanganan. “Playing with the best of best, it’s such a great experience, especially as rookie. Makes me want to be in this position even more.”

The CME Group Cares Challenge is a season-long charitable giving program that turns aces into donations. CME Group donated $20,000 for each hole-in-one made on the LPGA Tour in 2019, with a minimum guaranteed donation of $500,000 to St. Jude Children’s Research Hospital, which is leading the way in how the world understands, treats and defeats childhood cancer and life-threatening diseases.

Austin Ernst made the ninth hole-in-one of the 2020 LPGA Tour season on Thursday, finding the bottom of the cup on No. 4 with a 9-iron from 138 yards during the third round. The nine aces on the 2020 season means a total of $180,000 has now been donated to St. Jude Children’s Research Hospital this year.