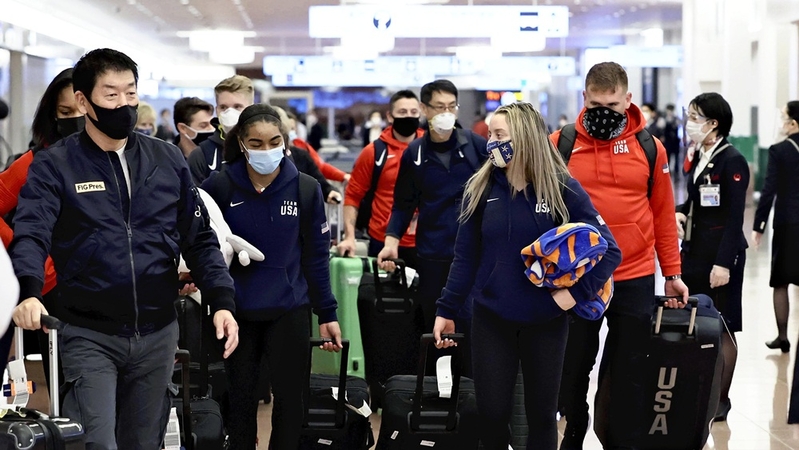 U.S. gymnasts arrived at Haneda Airport in Tokyo, on Nov. 4, 2020 in preparation for the first international event for an Olympic sport to be held in Japan since the outbreak of the coronavirus pandemic. MUST CREDIT: Japan News-Yomiuri

TOKYO – The International Olympic Committee is “very confident” the Olympics can take place in Tokyo next summer with a reasonable number of spectators, thanks to the development of vaccines and rapid virus testing, its president, Thomas Bach, said Monday.

The IOC also wants to “convince” foreign athletes and spectators to be vaccinated before coming to Japan, he said, but it can’t make vaccines obligatory.

“In order to protect the Japanese people and out of respect for the Japanese people, the IOC will undertake great effort so that as many as possible – Olympic participants and visitors – will arrive here vaccinated, if by then a vaccine is available,” Bach said.

“This makes us all very confident that we can have spectators in the Olympics stadium next year and that spectators will enjoy a safe environment.”

Bach spoke on the first day of a three-day trip to Japan where he met with Prime Minister Yoshihide Suga, former prime minister Shinzo Abe, Tokyo Governor Yuriko Koike and the leaders of the Tokyo 2020 organizing committee.

Bach also hailed successful test events held in Japan in recent weeks, including an international gymnastics meeting and domestic baseball matches held in front of tens of thousands of fans in almost full stadiums, as evidence that sports can still take place safely despite the pandemic.

“And now we are nine months ahead of the Olympic Games, and based on this success, we can even be more confident – because in nine months from now, we know that we will even have more covid countermeasures in our toolbox than we have now.”

Bach cited recent progress in developing a vaccine agains the virus, and said rapid virus testing was also developing all the time and could be a useful tool in protecting people at the Games.

Last month, Japan staged a gymnastic competition in Tokyo involving competitors from China, Russia and the United States, as well as the host nation, in front of around 2,000 fans.

Gymnasts had to submit to strict rules, including a two-week quarantine before entering the country and daily covid testing. Aside from the competition and training, they were confined to their hotel rooms and even escorted to meals on the premises. But no cases of virus transmission were detected, and organizers and competitors said the experience had been worthwhile.

Some baseball games have also been held in practically full stadiums in recent weeks as experiments ahead of the Olympics, although for most games spectator numbers are limited to 50 percent of capacity.

Fans are required to wear masks, banned from cheering or shouting to avoid virus transmission and asked only to clap – restrictions that could be unpopular and tough to enforce among foreign crowds if imposed at the Olympics.

Japan says athletes will be exempt from having to undergo a 14-day quarantine on arrival in the country, and admits it won’t be able to force foreign spectators to quarantine or avoid public transport, raising the risks of virus transmission in the absence of mass vaccination. But a final decision on whether to allow in foreign spectators, and from which countries, has yet to be made.

Bach said it was also unclear whether stadiums could be full at the Games, but said he was confident that a “reasonable number” would be able to attend.

“We all have to understand that the people in the world are living in uncertainty,” he said. “What we are saying is we are living in a dark tunnel, and the Olympic Games then next July and the Paralympic Games next August, they can be the light at the end of this tunnel.”