Ford shares surge on optimism about new bosses and models 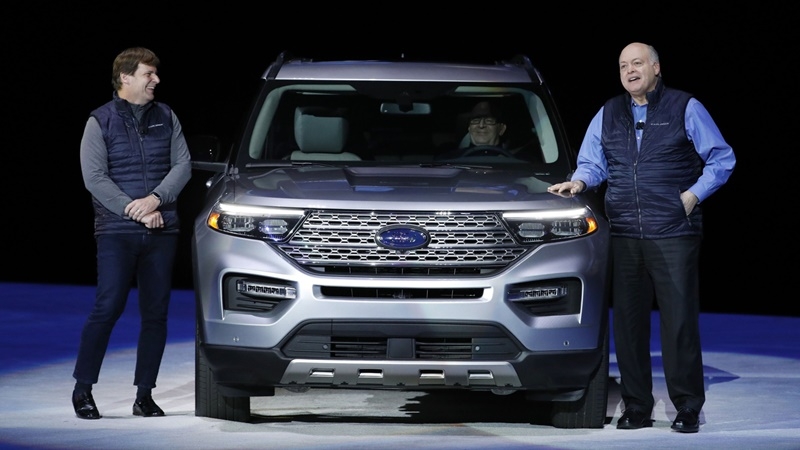 Jim Hackett, former president and CEO of Ford., right, speaks as Jim Farley, current CEO, stands next to a 2020 Explorer SUV in Detroit, Mich., on Jan. 9, 2019. MUST CREDIT: Bloomberg photo by Jeff Kowalsky.

Shares of Ford surged on optimism about its new leadership and earnings potential from new models such as the Bronco sport-utility vehicle and a redesign of its top selling F-150 pickup truck.

The automaker’s stock rose on Monday after Benchmark analyst Michael P. Ward raised his earnings estimate for the company and upgraded his rating to buy from hold. His recommendation became just the fourth buy on Ford, compared with 13 holds and two sells.

“A new management team and better-than-expected third-quarter earnings provide a near-term catalyst for Ford,” Ward wrote in a note to investors. “Momentum from new products and the need to replenish depleted inventories of full-sized pickup trucks should accelerate the momentum into 2021.”

“Both Farley and Lawler, in our opinion, will be perceived as significant upgrades by the investment community,” Ward wrote. “The management changes, along with new product momentum and the benefits of cost improvement actions, in our opinion, are positive variables for the stock.”

Ward placed a $10 price target on Ford shares, which have fallen 55% since turnaround specialist Alan Mulally retired as CEO in 2014 but are up about 17% since Farley took the top job on Oct. 1.

Farley has said he plans to accelerate Ford’s turnaround even as the automaker forecasts its first annual loss in a decade. As he takes the wheel, his hand is strengthened by new models on the launching pad, including the redesigned F-150, Ford’s biggest money maker; an electric Mustang Mach-E and the revival of the rugged Bronco, which already has received more than 165,000 deposits of $100.