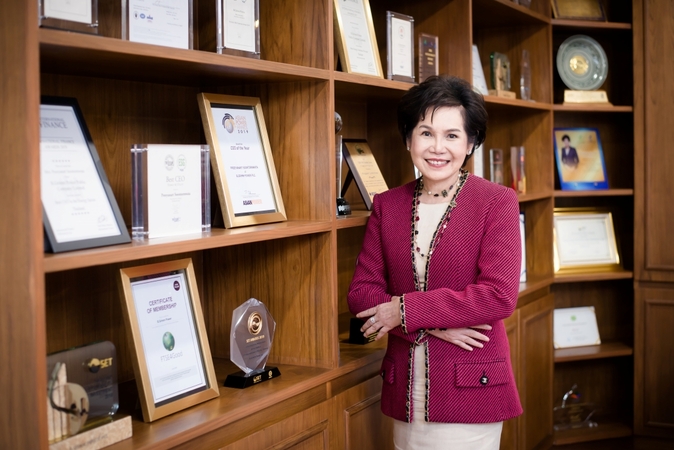 The awards are bestowed by Corporate Governance Asia, a leading investment and governance magazine.

“The awards speak volumes about B Grimm’s commitment in conducting its business with economic, social and environmental responsibilities based on the principles of good corporate governance and under the vision of ‘Empowering the World Compassionately’ which sees the company doing business with compassion over the past 142 years,” Preeyanart said.

The Asian Excellence Awards are based on corporate data in conjunction with a survey of investors, analysts and other experts across Asia.

Krungsri (Bank of Ayudhya) on Thursday announced net profits of Bt19.7 billion for the first nine months of 2020, a fall of 25.3 per cent or Bt6.6 billion from the same period last year.

The bank blamed the sharp drop on an unfavourable environment together with severance payments and the absence of extraordinary one-time gains from selling a 50 per cent stake in its micro-loans arm Ngern Tid Lor.

Investors remained fixated on Washington, where lawmakers continue to work toward a package to bolster the economy. While House Speaker Nancy Pelosi, D-Calif., signaled optimism on a deal with the administration, opposition remains in the Republican-controlled Senate, making a pact before the election less likely.

“Earnings are heating up and they are generally coming in healthy and better than expected. But with the stimulus saga dragging on and the election looming, macro influences will continue to dominate market internals until there’s some clarity,” Tom Essaye, a former Merrill Lynch trader who founded “The Sevens Report” newsletter, wrote in a note.

In Europe, the Stoxx Europe 600 Index was lower. Luxury handbags and scarves house Hermes International rose after surpassing analysts’ sales estimates on a rebound in demand from Asia. The MSCI Asia Pacific Index slid. Gold declined, and copper slipped after topping $7,000 a ton for the first time in more than two years.

With no meaningful progress on fiscal policy, markets “are reacting to the heightened political instability that comes with the confirmation of efforts to manipulate the presidential race,” said Eleanor Creagh, a Sydney-based strategist at Saxo Capital Markets. “The ability for either candidate to seize upon accusations of foreign interference is heightened and raises the probability of a contested outcome, particularly as the race could be closer than polls currently indicate.”

Around the world, there is also increasing evidence that the pandemic is worsening. German infections have jumped to a record and Spain’s heath minister said the spread of coronavirus is out of control in certain parts of the country. U.S. hospitalizations for covid-19 have reached a two-month high.

These are some of the main market moves:

Thailand’s household debt jumped this year from 80 per cent of gross domestic product (GDP) in the first quarter to 83.8 per cent in the second quarter.

“Falling income caused by the virus impact has contributed to a rise in household debt,” Sethaput said.

He explained that although Thailand’s unemployment rate is relatively low, many workers had moved from higher-paying jobs in manufacturing, services and tourism, into agriculture. Many are also working fewer hours.

According to a BOT study, the same debtors account for 80 per cent of Thailand’s household debt over the past nine years. One in five pensioners is in debt, with those aged 61-65 owing an average Bt100,000.

More younger people are also entering the borrowing cycle, with 50 per cent of those aged 30-40 now in debt, mostly via personal loans and credit cards.

Looking forward, household debt will continue to rise for the next two years, with the economy projected to recover to pre-Covid levels in the third quarter of 2022, he warned.

The central bank would launch more measures to deal with long-term problems, Sethaput said, without revealing any details.

The BOT has urged banks to continue providing support for companies and individuals struggling with debt when its current measures, including debt-payment suspension, end this month.

SET-listed company profits projected to fall over 40% in Q3

Listed companies’ third-quarter profits are expected to drop over 40 per cent year on year, driven by the fall in tourism revenue, according to Tisco Securities.

The securities company evaluated 114 listed companies and projected their accumulated third-quarter net profit at Bt103 billion – down 42 per cent from a year earlier, but up 9 per cent from last quarter.

Tourism-related firms such as hotels and airlines would face losses from the Covid-19 fallout, while oil refinery operators would be hit by the decline in gross refinery margin, said Tisco.

It also forecasts a fall in third-quarter profits for commercial banks, due to high reserves, and energy companies, due to pressure on oil sales and prices.

“Profits of most listed companies will remain in negative territory, except for construction-material and electronics part firms, though these would not help stimulate the stock market much” said Tisco senior strategist Apichat Poobunjirdkul.

But fourth-quarter profits would be boosted by the return of tourists and recovering domestic consumption, he added.

“However, investors should monitor for impact on the stock market from domestic political unrest, while listed companies’ fourth-quarter profit is expected to be lower than the same period last year,” he said, adding that profits would rise in the first quarter of next year.

Tisco forecasts listed companies’ accumulated net profit in 2020 will drop 39 per cent to Bt470 billion from Bt780 billion last year, due to the virus crisis and domestic political unrest.

“Listed companies’ net profit next year will increase by 37 per cent to Bt650 billion,” he added.

“However, we believe that profits have bottomed out and will gradually increase in many industries as the Covid-19 impact subsides. We also expect listed companies to be more economically active in the fourth quarter of this year,” he said.

SET slumps over delay in US stimulus measures, political unrest

In the morning session, a Krungsri Securities analyst said he expected the index to fall to 1,210 points due to uncertainty over fresh US economic stimulus measures.

“The market expects the rollout of the latest stimulus bill to be delayed after added conflict between the Democrats and the Republicans,” he said.

“Meanwhile, the falling oil price due to the second Covid-19 wave, Thailand’s political unrest and mass sell-offs in stocks before the upcoming three-day holiday will pressure the index,” the analyst predicted.

Other Asian indices were mixed:

SCGP shares rise on first day of trading after IPO

The price of SCG Packaging (SCGP) shares on the first day of trading on Thursday rose to Bt37 per share, up 5.71 per cent from its initial public offering (IPO) price of Bt35, with the company seeing total transactions of Bt6.26 billion.

The Siam Cement subsidiary launched the IPO to raise approximately Bt45 billion in capital from September 28 to October 7 this year.

SCGP chief executive officer Wichan Jitpukdee said Bt27 billion from the fundraising would be used for business expansion, Bt8.2 billion of which would go to increase the company’s production capacity in Thailand, Vietnam, the Philippines and Indonesia.

Wichan also said Bt13 billion would go for repaying debts to financial institutions and Bt4.5 billion would be used as a circulating fund.

“This fundraising will help expand SCGP’s business in Asean countries, especially Thailand, Vietnam, Indonesia, the Philippines and Malaysia,” he said.

SCGP, which is a large-cap stock with a market capitalisation of around Bt150 billion, has the chance to be listed in the SET50 or SET100, an analyst at Asia Plus Securities said.

SET falls amid doubts over fresh US economic stimulus measures

An analyst at Krungsri Securities expected the index to fall to 1,210 points due to uncertainty over fresh US economic stimulus measures.

“The market expected the rollout of the latest stimulus bill to be delayed after added conflict between the Democrats and the Republicans,” he said.

“Meanwhile, the falling oil price due to the second Covid-19 wave, Thailand’s political unrest and mass sell-offs in stocks before the upcoming three-day holiday would pressure the index,” the analyst pointed out.

The price of gold dropped by Bt50 per baht weight in morning trade on Thursday, the Gold Traders Association reported.

The spot gold price moved to US$1,913 (Bt59,896) per ounce in the morning after the price rose by $14.10 to $1,929.50 per ounce at close on Wednesday from a weakening dollar, as well as uncertainty over the rollout of fresh US economic stimulus measures and the Covid-19 crisis.

#The Government Savings Bank brings a wide array of financial solutions to the Money Expo 2020 in Bangkok from October 22-25.

Highlights include a 107-Day Savings Deposit Account with interest rising to 10%, and a mortgage loan with 0% in the first year. For more details:  https://www.gsb.or.th/promotions/money-expo-2020/