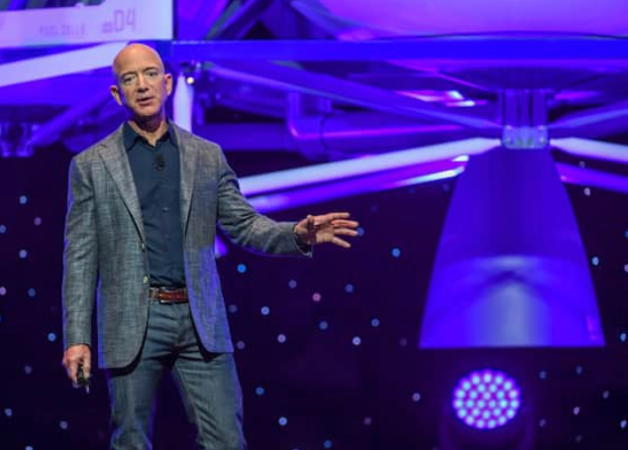 Jeff Bezos’ Blue Origin sent a rocket to the edge of space on Tuesday. MUST CREDIT: Washington Post photo by Jonathan Newton.

By The Washington Post · Christian Davenport · NATIONAL, TECHNOLOGY, SCIENCE-ENVIRONMENT
For the first time in 10 months, Jeff Bezos’s secretive space company on Tuesday flew a rocket to the edge of space from its remote launch site in West Texas. The successful flight came after a more than two-week delay and was Blue Origin’s 13th trip to space, bringing it another step closer to one day ferrying paying customers there.

But the suborbital launch won’t quiet critics who say Blue Origin is plodding along with the short-legged lethargy of its bashful mascot, the tortoise, only rarely poking its head out of its shell.

For all its accomplishments, the company Bezos founded 20 years ago still has not reached orbit. It hasn’t flown a single human being. It recently lost out on a major Pentagon launch contract. And its goal of “millions of people living and working in space” seems as distant as ever. (Bezos owns The Washington Post.)

The company’s motto is “gradatim ferociter,” or loosely, “step-by-step, ferociously.” But even its competitors have lamented that it could use a little less “gradatim” and a little more “ferociter.”

“Engineers do better when they’re pushed hardest to do great things in a very short period of time with very few resources. I think that’s when you do great work. Not when you have 20 years,” Gwynne Shotwell, SpaceX’s President and chief operating officer lamented at a conference last year. “I don’t think there’s the motivation or the drive there.”

Bezos would take issue with that. Space is his lifelong passion, from the moment he watched Neil Armstrong step on the moon as a five-year old. As a child, he devoured science fiction and named his dog Kamala after a Star Trek character. Then, as now, he rhapsodizes about a future in which humans live in massive habitats in orbit and mine asteroids.

And in 2013, he funded an expedition to recover the engines that powered the Saturn V rockets that sent the Apollo astronauts to the moon. The crew included Bezos and several members of his family, including his parents, who endured rough seas but ultimately recovered several pieces that are on exhibit at the Seattle Museum of Flight.

He’s motivated to the tune of investing $1 billion a year into Blue Origin, which he said ” is the most important work I’m doing.”

The evidence of that is on display at Cape Canaveral. Across from the Kennedy Center Visitors complex, Blue Origin is building a massive rocket manufacturing campus, several city blocks long. It is renovating a historic launch pad for the towering, 300-foot tall rocket it’s building called New Glenn.

And, perhaps most of all, it is focused on developing a spacecraft capable of ferrying astronauts to and from the moon’s surface. Along with partners Lockheed Martin, Draper and Northrop Grumman, Blue Origin is building a lunar lander that it hopes NASA will use in its return to the moon.

In August, Blue Origin delivered a full-scale mockup of the spacecraft to NASA’s Johnson Space Center for testing and astronaut training. Last month, the lander cleared its first major development milestone, called a “systems requirement review,” a key step that allows the companies to move forward with the lander’s design.

The activity comes as Blue Origin is readying for human flight on New Shepard, named for Alan Shepard, the first American in space. It is an arduous process that has slowed development. The timeline has also been hampered by the coronavirus pandemic. During a broadcast of Tuesday’s mission, Joel Eby, Blue Origin’s creative director, said the company has been “been working very hard to verify the system and have just a couple more flights before we start to put humans on board.”

Tuesday’s flight, the first of New Shepard since December, had no passengers but did carry 12 payloads some 66 miles high, just past the edge of space, including a system, developed by NASA, designed to help spacecraft land precisely on the moon.

The sensors, computers and a laser system known as lidar would “work together to determine a spacecraft’s location and speed as it approaches the moon, enabling a vehicle to land autonomously on the lunar surface within 100 meters of a designated point,” Blue Origin said in a statement. “The technologies could allow future missions – both crewed and robotic – to target landing sites that weren’t possible during the Apollo missions, such as regions with varied terrain near craters.”

Bob Smith, Blue Origin’s CEO, said during the broadcast that the sensors will give NASA a “great understanding of how we do precision landing on the moon. This is something different than what we’ve had in Apollo, where they didn’t have those technologies. Now we can land very closely and position things, all in one area.”

From launch to touchdown, the flight lasted just over 10 minutes and would have given passengers a few minutes of weightlessness and views of the Earth from space. Blue Origin hopes to flying paying customers soon, though the timeline has been delayed repeatedly, and the company has not said how much it would charge for the experience. (Richard Branson’s Virgin Galactic, which has flown humans to space twice in test flights, and hopes to start flying customers next year, has charged as much as $250,000.)

It is clear, though, that behind the scenes, Blue Origin is thinking well beyond suborbital space tourism. In addition to its work on the lunar lander, it is looking to build space stations in Earth orbit as well.

The company recently posted a job opening for an “Orbital Habitat Formulation Lead.”

“To develop Blue Origin’s vision of millions of people living and working in space, humanity will require places for them to live and work: space destination systems I which value-creating economic activity can occur,” it reads. The space station in low Earth orbit (LEO) would go beyond the International Space Station to support “a robust LEO economy” and be “fundamentally different from the ‘exploration’ habitats designed for small, professional trained crews in deep space.”

In other words, it reads: “You will directly impact the history of human spaceflight.”