OPEC+ gets scant relief from vaccine as oil ministers meet 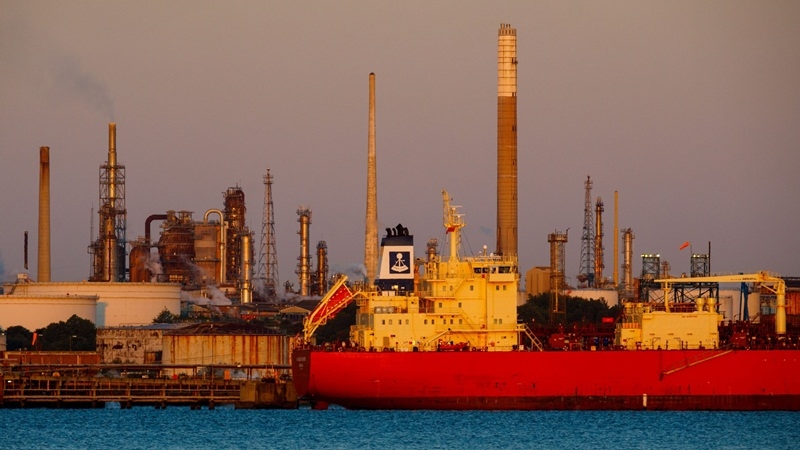 The tanker Navigator Genesis is moored near the Esso Fawley Oil Refinery in Fawley, England, on May 14, 2020. MUST CREDIT: Bloomberg photo by Luke MacGregor

Oil markets may be cheering the prospects of a coronavirus vaccine, but OPEC+ can’t celebrate.

Crude prices have rallied to a 10-week high on hopes that Pfizer Inc. and BioNTech SE’s breakthrough could soon revive the flights, car journeys and other economic activity that underpin fuel consumption.

Nonetheless, the alliance of producers led by Saudi Arabia and Russia is discussing a delay of the supply boost they’d hoped to make in January. Oil demand is currently suffering a fresh blow from a resurgence of the pandemic.

Ministers are focused on a postponement of three to six months, according to delegates familiar with the talks who asked not to be identified. They’ll hold an interim meeting on Tuesday to review the market, then make a final decision in a further two weeks.

“This is the wrong time to be increasing crude supply,” Bob McNally, president of consultant Rapidan Energy Group and a former White House official, said in a Bloomberg television interview. “They really almost have no choice now but to postpone. The demand pullback in Europe is frightening.”

While the vaccine progress relieves some of the pressure on the Organization of Petroleum Exporting Countries, it won’t provide a significant boost to demand until the second half of 2021 next year, according to the International Energy Agency in Paris. Economic fallout from the latest wave of lockdowns will linger, OPEC said in a report.

The 23-nation alliance had intended to ease some of the unprecedented supply curbs introduced in May to offset the collapse in demand, restoring 2 million barrels a day of output at the start of next year. They made a similar increase over the summer as the global economy recovered, and hoped that the trend would continue.

But in recent weeks OPEC+ members have acknowledged those aspirations look unfeasible. Instead, the producers look set to keep about 7.7 million barrels a day — roughly 8% of global supply — offline for a little longer.

Deferring the supply boost — and thus supporting prices — may be critical for OPEC+ nations, many of which need oil prices far above the current level of $43 a barrel in order to cover government spending. It would also throw a lifeline to the wider industry, from majors like Exxon Mobil Corp. to independent companies in the U.S. shale patch.

Even Russia, usually reluctant to forego oil sales, has signaled support. President Vladimir Putin said on Oct. 22 that delay was an option, and even gestured at the possibility of making deeper production cuts if necessary. Further curbs don’t appear needed so far, delegates say.

“The lockdowns in Europe and what that will mean for demand will be very much on their mind,” Daniel Yergin, vice chairman at IHS Markit, said in a Bloomberg Television interview. “The easiest thing for them to do, and as President Putin signaled, is to roll it over.”

While the Joint Ministerial Monitoring Committee that convenes on Tuesday won’t set policy, Riyadh and Moscow may give some insight into their thinking before the main ministerial meetings on Nov. 30 to Dec. 1. Updates on the different vaccines under development by pharmaceutical companies are expected in the meantime.

Faltering demand isn’t the only headache for the alliance, which is also having to reckon with a surprising increase in supply from one of its own members.

Libya, which is exempt from the agreement to restrain production, has revived output to the highest level in almost a year after a truce in its civil war. The North African nation tripled supply to 450,000 barrels a day last month, and is now pumping above 1 million a day.

The case for extending curbs, though persuasive, could still run into opposition.

The United Arab Emirates, which has recently chafed at its OPEC commitments, emphasized on Nov. 9 that consensus is necessary for the deal to be amended. “We have to be all convinced that tweak is required,” Energy Minister Suhail Al Mazrouei said.

One flash-point may be the millions of barrels of outstanding cuts still due from some members, which were supposed to be completed by the end of the year.

OPEC+ nations that flouted their output quotas in the initial months of the agreement, such as Iraq and Nigeria, have been tasked with “compensation cuts.” After making some tentative efforts at these, Baghdad defiantly ramped exports back up last month.

Iraq has often rebelled against OPEC-mandated supply limits as it rebuilds an oil industry and economy scarred by decades of conflict and sanctions.

As Baghdad’s finances come under acute distress, OPEC delegates doubt the country will make further efforts to atone. With Saudi Arabia’s steely energy minister determined that all remaining debts are paid, the group may face a bumpy path to a final agreement.