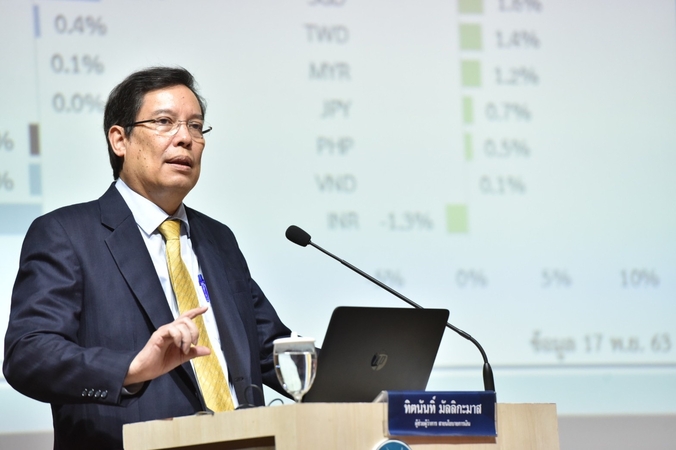 At a meeting on Wednesday, the Bank of Thailand’s Monetary Policy Committee (MPC) voted unanimously to maintain the policy rate at 0.5 per cent to support economic recovery, while placing emphasis on more targeted measures, MPC secretary Titanun Mallikamas said.

The committee believes that despite the recent better-than-expected results, the Thai economy will recover slowly and will need support from continued low policy rate.

As economic recovery will remain fragile and highly uncertain, the committee voted to maintain the policy rate and preserve limited policy space in order to act at the appropriate and most effective timing.

The Thai economy showed better than expected improvement in the third quarter of this year. However, recovery is expected to remain slow and vary significantly among different sectors.

Overall, the economy is projected to take approximately two years before it returns to pre-pandemic levels.

Consequently, the labour market will remain fragile as labour incomes remain low. This in turn will weigh on private consumption, particularly among low-income households following the phase-out of temporary supporting factors.

Public expenditure is also expected to be lower than previously expected.

The financial system, however, remains sound despite increasing vulnerabilities given the economic outlook and risks to the financial positions of businesses and households.

Meanwhile, headline inflation will be less negative in line with increasing energy prices and will stay close to the lower bound of the target range in 2021. Medium-term inflation expectations remained anchored within the target.

Despite ample liquidity in the financial system and low financing costs, some businesses, especially SMEs, and households in need of liquidity have not gained access to credit.

The baht appreciated rapidly against the US dollar owing to risk-on sentiment following the US presidential election outcome and progress of Covid-19 vaccine development.

The committee expressed concerns over the rapid appreciation of the baht as this affected the fragile economic recovery. Hence, it said, it will closely monitor developments in foreign exchange markets and capital flows as well as consider the necessity of implementing additional measures.

The committee said policy coordination among government agencies will be critical to support the economic recovery going forward. Monetary policy must remain accommodative. Financial and credit measures should expedite liquidity distribution to

affected groups in a targeted and timely manner, and financial institutions should accelerate debt-restructuring to have a broader impact. Fiscal measures continued to play an important role in shoring up the economy. The government should thus accelerate budget disbursement and assist vulnerable target groups. In addition, implementation of supply-side policies should be accelerated to support business restructuring and upskilling of workers, which will help support sustainable economic recovery in the long term.

the committee continued to put emphasis on supporting economic recovery.

The committee will monitor the adequacy of the government measures and various risks, including domestic political uncertainties, progress of protocols for admitting foreign tourists, and financial position of businesses and households, in deliberating monetary policy going forward. The committee said it will stand ready to use additional appropriate monetary policy tools if necessary.