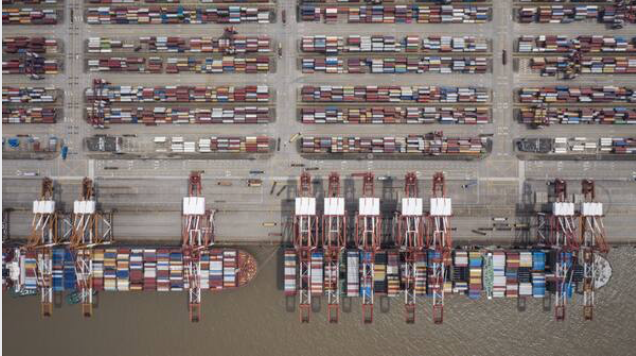 An aerial photograph shows vessels loaded with shipping containers docked at the Yangshan Deepwater Port in Shanghai on July 12, 2020. MUST CREDIT: Bloomberg photo by Qilai Shen.

By Syndication Washington Post, Bloomberg · No Author · BUSINESS, WORLD, US-GLOBAL-MARKETS, ASIA-PACIFIC
China’s ability to keep selling more of its goods abroad means officials will be in no rush to rein in their strongest yuan in more than two years.

The People’s Bank of China in November has refrained from using tools to limit the yuan’s advance, even as the currency heads for the longest run of monthly gains in six years. That’s a reversal from last month, when authorities made it cheaper to bet against the yuan and eased some control over the exchange rate, moves that were interpreted as part of Beijing’s effort to rein in appreciation.

One theory points to evidence that the rallying yuan isn’t actually hurting Chinese exporters. Demand is surging globally for everything from hazmat suits to medical instruments, in large part produced in China. A gauge measuring the country’s outbound cargo prices soared to the highest level in six years this month, according to data from the Shanghai Shipping Exchange. In October, China’s export rose at the fastest pace since early 2019, beating estimates.

The resilience of exporters means China may not need to guide the yuan weaker after it soared more than 9% since late May. A stronger exchange rate also helps make imports cheaper and boosts domestic consumption, a goal President Xi Jinping hopes to achieve as he pushes for a self-reliant economy. Currency strength will also attract more foreign buyers to Chinese bonds and stocks, a vital step as Beijing seeks to promote the yuan’s global use.

“The PBOC is allowing the yuan to follow market demand and supply forces, because they are well aligned with China’s strong fundamentals,” said Dariusz Kowalczyk, senior emerging-markets strategist at Credit Agricole CIB. The Chinese currency will advance further next year due to the country’s economic rebound from the virus pandemic and a weaker dollar, he added.

Chinese exporters are resilient because they are receiving more orders of protective equipment and work-from-home electronics products from foreign buyers as the pandemic spreads, Nomura Holdings Inc. economists led by Ting Lu wrote in a note. China’s export growth could remain elevated for another few months, they said, as there’s no sign of improvements in virus control overseas.

Apart from strong exports, the yuan is also bolstered by China’s solid recovery from the pandemic, and capital inflows chasing onshore bonds’ wide interest-rate premium over yields seen elsewhere in the world. A Joe Biden win in the U.S. presidential election also raised hopes for friendlier China-U.S. ties, also a boon for the currency.

The PBOC isn’t eager to slow those gains. In the past nine sessions, the central bank set its reference rate less than 0.03% away from the average forecasts in Bloomberg surveys with traders and analysts. Prior to that, the fixing was weaker than expected for 10 days in a row, with the bias on Nov. 6 being the largest in more than a year. The rate — which limits the onshore yuan’s moves by 2% on either side — is an important tool for Beijing to guide sentiment.

Beijing took more fierce measures to rein in the rally last month. On Oct. 27, China said some lenders stopped using a factor used to smooth out volatility when submitting their fixing quotes. And earlier last month, the authorities scrapped a two-year rule that made it expensive to bet against the yuan, and allowed some domestic institutional investors to buy more overseas bonds and stocks.