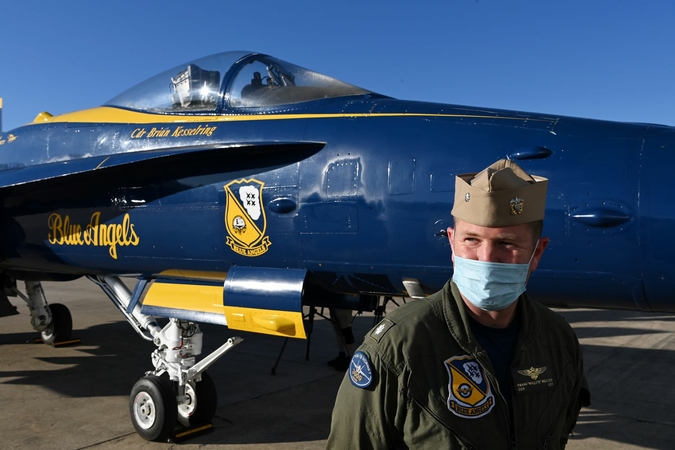 Old 439 rolled slowly down the runway in the afternoon sun, trailing noise and jet fumes, and still looking sharp in blue and gold after 33 years in the Navy.

The veteran of the 1991 Persian Gulf War, of countless aircraft carrier “traps” and “cat shots” – landings and takeoffs – and once the “boss” jet for the Navy’s Blue Angels flight demonstration team pulled to a stop outside the Smithsonian museum where it will end its days.

Cmdr. Frank Weisser had flown a few passes in the F/A-18C Hornet in front of the National Air and Space Museum’s Steven F. Udvar-Hazy Center on Wednesday, the jet’s engines howling. Then he landed at Dulles International Airport next door.

The Navy has turned over the jet to the Smithsonian so it can be displayed with other historical aircraft in the cavernous center in Chantilly, Va. The Udvar-Hazy Center is a branch of the main museum on the National Mall in downtown Washington.

The Blue Angels have replaced the Hornet, a jack-of-all-trades workhorse, with the newer and bigger Super Hornet.

“I have spent hundreds of hours flying 439,” former Blue Angels leader Capt. Eric “Popeye” Doyle said in a statement. “Whether in combat or . . . with the Blue Angels, the Hornet . . . has brought me and many of my friends home safely for decades.”

Christopher Browne, deputy director of the Air and Space Museum, said the Hornet was an ideal addition.

“Part of our mission is to grow the national collection of the most iconic aerospace artifacts this nation has ever had,” Browne said. “The F-18 that the Blue Angels have used clearly falls within that category.

“Not only did it have a wartime record in Desert Storm 30 years ago, but . . . it is also an aircraft that most of America sees and understands. To be able to get an aircraft with this kind of record, this kind of provenance . . . [is] one of the most popular acquisitions we will have made in many years.”

The jet – technically Navy Bureau No. 163439 – taxied to the museum down a narrow runway from the airport about 3 p.m. Weisser had flown it in from headquarters in Pensacola, Fla.

“I’ve been privileged to fly this airplane in air shows all over the country,” he said after he climbed out of the cockpit. He said Blue Angels pilots often get to fly the same jet over and over, which is “pretty rare in naval aviation.”

“So you do have an affinity for these airplanes,” Weisser said. “The one that I flew more than the rest, I feel like I love just shy behind my family.”

Before donning the colors of the Blue Angels, the aircraft had variously carried the insignia of eight different squadrons, including the red-eyed ram of the VFA-83 Rampagers, the coiled snake of VFA-86 Sidewinders and the white raptor of the VFA-136 Knighthawks.

It flew with the Sidewinders during the Gulf War and then with the Rampagers enforcing the no-fly zone over southern Iraq in 1994, according to the Smithsonian.

The Hornet, with its distinctive V-shape tail section, has been used by the Blue Angels twice as long as any other aircraft type, serving for 34 of the team’s 74 years, the Smithsonian said.

The organization was founded in 1946. Its name was plucked from a column in the New Yorker magazine that mentioned the Blue Angel nightclub in Manhattan, the team says on its website. The pilots loved it, and it stuck.

The Smithsonian’s jet is among the first C models built. It was handed over to the Navy in 1987. The Smithsonian will now own it, spokeswoman Alison Mitchell said.

It came to the Blue Angels in 2015. The jet had been active with the team until the end of the 2020 season, when the Hornet was replaced by the Super Hornet.

The team’s breathtaking air show maneuvers are not without danger. In 2016, another F/A-18C crashed and its pilot, Marine Capt. Jeffrey Kuss, 32, was killed during a practice session in Tennessee.

He tried to eject when he lost control of the jet but did so too late, Navy investigators have reportedly said.

Under normal conditions, the Hornet is extremely versatile and easy to maintain, said Laurence Burke, curator of U.S. naval aviation at the National Air and Space Museum.

“There’s a brief period (in the 1980s and ’90s) . . . where the air wing on a carrier is almost entirely Hornets,” Burke said. In addition to its flexibility, one of the big things was its reliability. It was designed to be as reliable as possible with maintenance in mind, to be easier to work on.

“I’ve heard . . . how amazing it was on a carrier when the first Hornets began arriving, and they needed so much less maintenance . . . than the F-14,” he said. “The Hornet is a real game changer.

“It was hoped at the beginning of naval aviation that there would be one airplane that would be able to do everything. The Hornet is the closest the Navy has gotten to that ideal.”