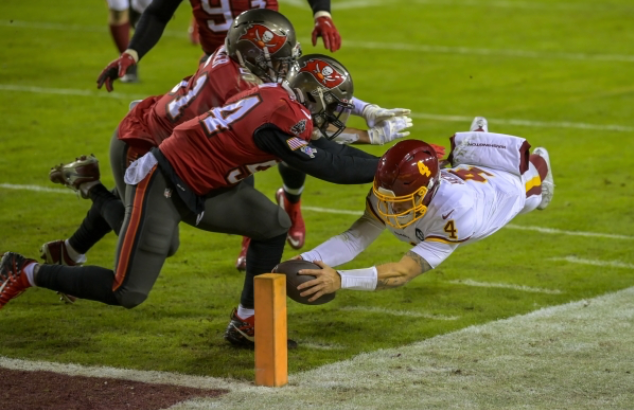 Quarterback Taylor Heinicke, erstwhile college student and veteran of eight NFL games, has the pylon in his crosshairs on this touchdown scamper that trimmed Washington deficit to 18-16 late in the third quarter. MUST CREDIT: Washington Post photo by John McDonnell

Taylor Heinicke’s touchdown run that solidified his legend started with a simple read. He glanced at running back J.D. McKissic running into the flat out of the backfield – covered. He moved to receiver Terry McLaurin on the drag over the middle to replace McKissic – covered.

He saw tight end Logan Thomas blanketed behind McLaurin, ducked under a defensive tackle and bailed out of the pocket to his left. He beat another defensive tackle, Ndamukong Suh, to the edge, and according to NFL Next Gen Stats, reached a top speed of 19.29 mph. He reached the 4-yard-line and launched himself toward the pylon and into franchise lore.

While outstretched and in midair, Heinicke collided with Buccaneers star linebacker Lavonte David. He landed on his left shoulder and said he heard “a click or a pop,” but he popped up to celebrate, to foist both arms to the sky in the signal for a touchdown, because he had kept his balance and managed to reach the ball to the neon-orange pylon. The score brought the Washington Football Team as close as it’d come to the star-studded, heavily favored Tampa Bay Buccaneers in a 31-23 season-ending loss at FedEx Field on Saturday night.

And yet on a team with chronic quarterback instability, in a position group where the rise and fall of each contender this season would have seemed overdramatic in a soap opera, Heinicke still managed to deliver perhaps the most stunning performance of all. The 27-year-old who had started this fall by giving up on his NFL dream to return to college found himself, six weeks later, stepping in for Alex Smith, a Hallmark comeback story in his own right, and electrifying a fan base, a national audience and a group of teammates who never could have expected this. He played the fourth quarter with a separated AC joint in his left shoulder, an injury for which players can miss months.

“I didn’t feel good after that,” he said. “The next series, I got hit, hit the ground a couple times and decided we should go (in the locker room). … But (I) came back out there and gutted it out.”

Perhaps the most impressive part of Heinicke’s performance was that he defied a grade on the curve. He wasn’t good for a fourth-stringer. He wasn’t good for an emergency option. He was good period, completing 26 of 44 passes for 306 yards, one touchdown, an interception that wasn’t his fault and added six rushes for 46 yards. He compelled some of the league’s best past and present quarterbacks, from Joe Theismann to Patrick Mahomes, to praise him on social media. He raised the question of what his role could be next season.

“Gutsy,” Rivera said of the performance. “It really was. He created an opportunity for himself and we’ll see what happens.”

The circumstances of Heinicke’s success seemed improbable even this week. He had not spoken to many teammates because, as the quarantine quarterback, his job was to stay away from everyone. He had never thrown a pass to star receiver Terry McLaurin until practice Wednesday. He’d never shown the team he could play this way on a big stage because, in his only appearance before this one, he’d found success against a soft Carolina Panthers defense late in the fourth quarter.

But Heinicke proved Saturday that he was for real. He showed an uncanny understanding of the offense, and he flashed the mobility Buccaneers Coach Bruce Arians feared. Arians told reporters after the game he wished Smith had started. Heinicke’s third drive was a 10-play, 75-yard march to a touchdown that put Washington on the scoreboard.

In the second half, after his touchdown run, Heinicke returned from the locker room with tape on his left shoulder. After the ensuing drive foundered, Heinicke engineered an 11-play, 75-yard drive capped by a pretty touchdown throw to receiver Steven Sims in the back corner of the end zone.

“I can’t tell you why he was on the street before we picked him up,” said right tackle Morgan Moses. “He has every quality of a football player that you’d want. … He stepped up on a big-time stage, and I commend him for that.”

After it was over, after Heinicke had emerged from the midfield scrum, he was trudging back to the locker room when he felt a hand on the back of his jersey. He turned around to see McLaurin.

“I told him I appreciated him for laying it on the field for us,” the receiver said. “He has a heart of a lion. I told him I’d take him on my team any day of the week. … He’s a man of few words, but his actions speak volumes.”

During his postgame news conference, Heinicke chuckled at the absurdity of his journey. He grimaced at the mention of his shoulder, which he said won’t need surgery but “hurt like hell.” He joked about his professors at Old Dominion, to whom he still owes two final exams. But he grew serious when asked what he hoped he proved with this performance.

“Hopefully that I deserve to be in this league a little longer,” he said. “I’ve been on the other side, not playing, being in the real world. It’s not fun. It’s not as fun as this.”