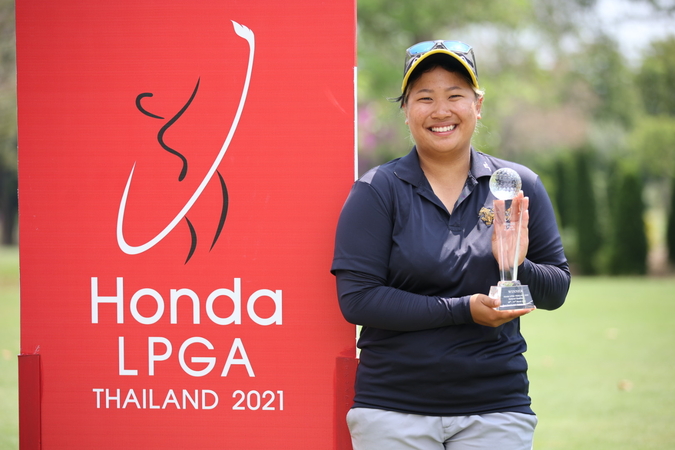 Wonderkid Chanettee Wannasaen broke through to earn a ticket to the Honda LPGA Thailand with a five-shot victory over Chonlada Chayanun in the National Qualifiers at the Siam Country Club Pattaya Old Course on Wednesday.

Playing in only her fourth tournament as a professional, the 16-year-old shot a final round 68 to finish 10-under-par 134, one year after losing the play-off at this course to Rena Tatematsu.

“I’m thrilled to finally make it after that play-off defeat last year,” said the in-form teenager from Chiang Mai, who finished tied second in the Phoenix Ladies Classic in Pattaya on Sunday.

“I hit six under in the first round [on Tuesday] and had a lucky chip-in eagle that gave me a big lead. The course sets up pretty tough with fast green speeds and difficult pin positions,” added Chanettee who will play the biggest event in her young career when the Thailand LPGA tees off here from May 6-9.

Back in December, Chanettee decided to turn pro at the Thailand Ladies Masters where she posted a top five finish. Her second tournament was the Thailand Mixed against the men, where she finished fourth.

The red-hot teen is now stepping up a level to face the stars of Thai golf in the LPGA event, including former world No 1 Ariya Jutanugarn and sister Moriya as well as Jasmine Suwannapura and Pornanong Phatlum.

“It will be an unfamiliar atmosphere for me as I normally play with local players. I will have to calm my nerves to compete against world class players,” the teenager said.

The top 60 players on the 2020 prize-money ranking will take part in the LPGA Thailand, which returns to Pattaya after being cancelled 12 months ago due to Covid-19 concerns. Amy Yang from South Korea won the 2019 edition and tops the charts with three wins here after victories in 2015 and 2017.