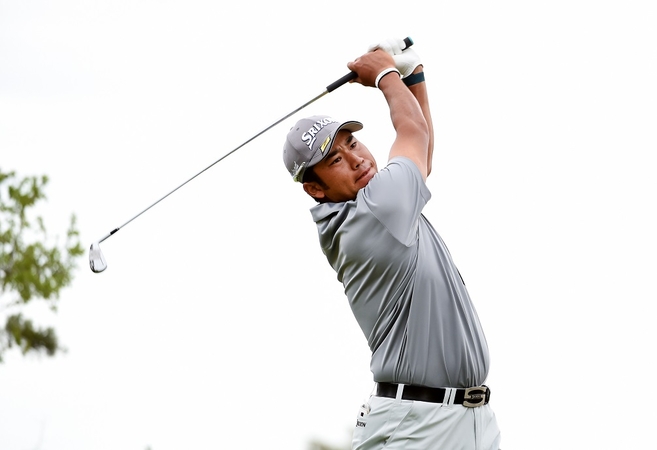 Japanese star Hideki Matsuyama enjoyed a 3-under 69 in the first round of the Masters Tournament as he found inspiration from the success of teenaged compatriot, Tsubasa Kajitani who won the Augusta National Women’s Amateur four days earlier.

The 29-year Matsuyama sank an eagle, two birdies and a lone bogey on a fast and firm Augusta National Golf Club to lie in joint second place alongside Brian Harman, and four strokes behind Justin Rose who shot a blistering 65.

Making his 10th successive Masters appearance, Matsuyama took full advantage of the par-5s, making birdies on Hole Nos. 2 and 13 from about 25 and 15 feet respectively and sinking an eagle on the eighth from 30 feet. A three-putt bogey on 17 was his only blemish as he was one of three players shooting in the 60s. The first round scoring average was 74.52.

Matsuyama said he was over the moon following Kajitani’s success last weekend when the 17-year-old triumph in the Augusta National Women’s Amateur following a play-off. “What she did was fantastic. I wish I could have seen it. I was playing down in Texas, so I wasn’t able to see her play, but hat’s off to her. Hopefully, I can follow in her footsteps and make Japan proud,” said Matsuyama.

“The greens were firm and fast. It was very important to hit your second shot on the proper side of the pin, and I was able to do that. I felt very good about my round today.”

His Masters record is rather impressive. As a 19-year-old, he finished T27 in his debut 10 years ago to earn Low Amateur Honours and has since finished top-10 twice, with a fifth place in 2015 being his career best, and three times in the top-20. He shot back-to-back 68s last November before fading in the weekend with a pair of 72s to finish T13. His 69 on Thursday was also his eighth consecutive round of par or better at Augusta National.

A five-time winner on the PGA TOUR, Matsuyama has not won since 2017 and he is also chasing to become the first Asian winner at the 85th playing of the Masters. “It’s my 10th year, but I’ve never seen the greens so firm and fast. So it was like a new course for me today, and I was fortunate to get it around well,” said Matsuyama.

Kim, 25, featured on the leaderboard for much of the day with a controlled display, saying he “escaped not losing my mind.” He made five birdies on the card but late bogeys on 15 and 16 knocked him back.

Making his fifth consecutive appearance at Augusta National, Kim said he did not mind the contrast in playing conditions compared to last November. “It’s really different. Like five months ago, soft and a little bit slow, versus now it’s like super firm and fast. It’s a little harder I think, but it’s good for me. I like the fast greens,” said Kim, who has finished T24, T21 and T34 after a missed cut debut appearance in 2017.

After dropping a bogey on 11, which is the start of Amen Corner, Kim birdied the par-3 12th from about 15 feet and then made an easy two-putt birdie on the par-3 13th.  “On 12, I’m not trying to make birdie, just trying to get on the green. It’s a good shot in there,” he said.