Its crab fishing season in Gaza, local fishermen are taking this opportunity to make some money.

Every day, thousands of Palestinians, including fishermen and fishing enthusiasts, rush to the Gaza sea, throwing their nets into the water to catch crabs.

Their fishing season lasts for three months, from September to November. Palestinians, who have been suffering from acute economic crisis for years, rush to buy crabs due to their relatively low costs and the fact that some fish don’t reach the Gaza coast at this time of the year.

Bashir Muheisen is one of the fishermen, who used to benefit from the crab fishing season. However, it later became a tougher job. “We were allowed to fish within 20 nautical miles off coast, but the fishing areas further shrank after the blockade,” the 60-year-old father of ten said.

A man removes a crab from the fishing net at Al-Shati refugee camp in Gaza City, on Sept. 28, 2021. (Photo by Rizek Abdeljawad/Xinhua)

The man said he thought about looking for other jobs. But that was a mission impossible. “I spent most of my life in the sea. Neither I nor many other fishermen can work in other field,” he said.

Together with two of his sons, Muheisen catches about 60 kg of crabs a day. Then they sort them out in boxes, which are then sold in local markets.

“I can make about 80 U.S. dollars a day. However, it is not solely for myself as I should pay other people who help me catch and sell them,” the man said. 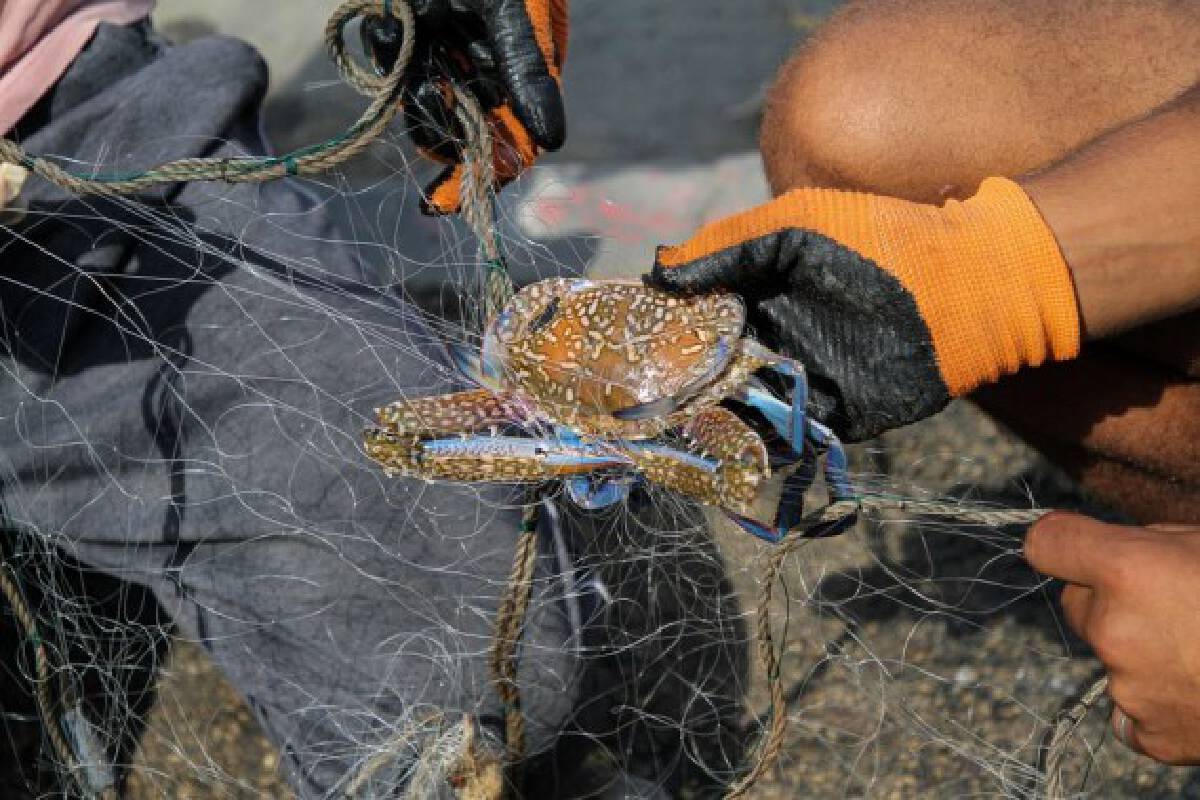 People remove a crab from the fishing net at Al-Shati refugee camp in Gaza City, on Sept. 28, 2021. (Photo by Rizek Abdeljawad/Xinhua)

Mahmoud al-Qouqa is an unemployed man from al-Shatea refugee camp. He told Xinhua that the crab fishing season has been giving him “a golden chance” to make money even it just lasts for a few months.

The 40-year-old father of four said that he graduated from university in 2006, but did not find any job neither in the public or the private sector. And that prompted him to look for a job in other fields such as building establishments, cultivating, driving cars, and catching crabs.

Al-Qouqa gains about 35 dollars a day, but he shares that money with his brother, who has six children.

According to the Department of Fisheries in the Hamas-run Ministry of Agriculture, crabs are usually caught over the year through trawl nets, while the crabs head to the beaches in large numbers during autumn, making them more accessible to fishermen.

“Every day of the autumn season, the fishermen in the Gaza Strip catch about 2,000 kg of crabs,” the ministry said in a press statement.

“Crabs are the fruit of the sea and we wait for their harvest season to enjoy the delicious taste,” Mohammed al-Aqraa, from Gaza City, told Xinhua.

The 35-year-old man said he buys crabs at least once a week for his family.

“In the past, before the Israeli blockade, the Palestinians used to buy fish but later, when most of them have been suffering from poverty, they resorted to buying crabs as they have the same nutritional benefits,” he said.