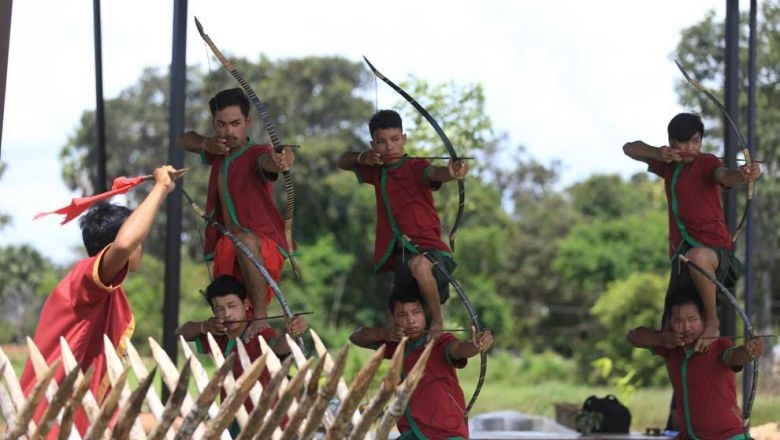 Dressed as 9th century Angkor Empire warriors, six performers are led by a commander waving a red flag. Pointing their arrows at the target, they show the eight steps of traditional archery by following their commander’s orders. Photo credit: Hong Menea
By Soung Sovanny
The Phnom Penh Post

Traditional and modern sets of bows and arrows are laid on a long table in the Royal Archery Club, established in Siem Reap town’s Prasat Bakong District, where visitors are introduced to the traditional form of Khmer archery or its modern equivalent.

To commemorate the ancestors, the armies begin by saluting three times to the ground and waiting for a horn signal from the royal adviser before taking the bows and arrows off the table to the ‘battlefield’.

Pointing their arrows at the target, they show the eight steps of traditional archery by following their commander’s orders.

The activities conducted at the Royal Archery Club’s soft opening ceremony earlier this year were a performance of what Khmer Empire troops practised before going out for battle.

Royal Archery Club founder Sa Dina told The Post: “We opened to the public about eight months ago after developing the 5ha plot of empty land by digging fish ponds and clearing land.”

Located in Steung village about 5km from Bakorng temple and 24km from Siem Reap town, the Royal Archery Club is becoming an ancient village in the “land of Gods”.

“We studied Siem Reap’s geography, and the area is a former garrison. If we think about Siem Reap’s history, we can imagine the glorious time when we were a great empire.

“We had an idea to create a garrison-like village in the area which was an ancient Khmer reservoir in the 9th century,” said Dina, 33.

Sreiny Pesey, one of the visitors, arrived in the shooting hall when a big group of visitors had just completed their session. She had heard of the archery club and was interested to learn.

“I am interested in this place as it offers a session on our traditional Khmer archery and I have never touched this ancient weapon before.

“So I just want to try and see if he organised the place like our ancestors did,” said Pesey, who moved from Phnom Penh to live in Siem Reap.

She added that she loved the fresh environment and promised that she would come back when the military camp was completely constructed.

“It is a fun game in which I can learn not only shooting arrows from different distances with two models of bow but also witness the traditional methods ancient armies practised in the field,” said Pesey, 32, who admitted she found archery difficult to pick up on her first go. 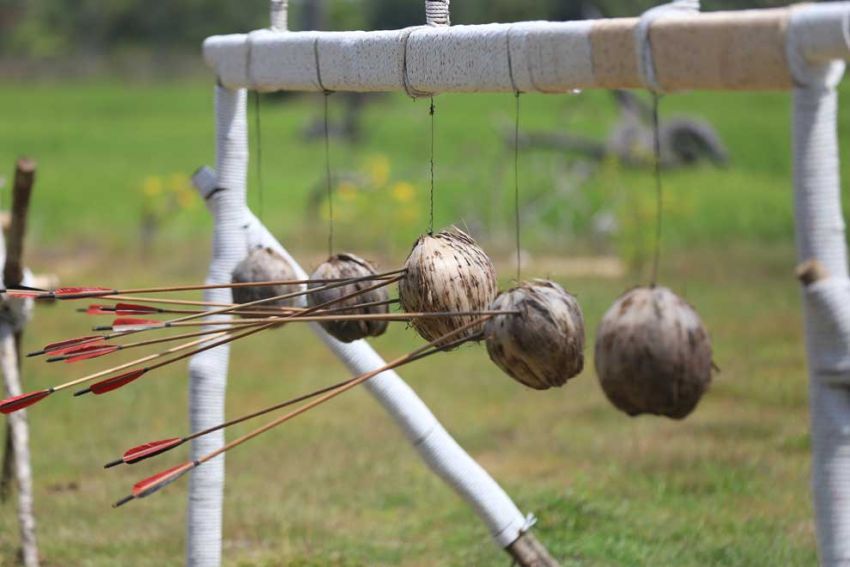 Visitors can choose a traditional Khmer bow that was used in ancient times to kill enemies or a modern one that is used in official sporting competitions. Photo credit: Hong Menea

Royal Archery Club manager Til Channlin documented the origin of traditional Khmer archery from various sources and studied the posture and techniques used in each form of archery.

One performer, who wore a white robe covered with accessories to play the role of a priest, said: “I researched archery from elders, museums and temple walls. The most information we can gain is from temples, where pictures a shown of archers, the shooting stance, shooting technique and all aspects of the weapon.

“Archery features on the walls of temples built during the reign of Suryavarman II. But we also found depictions at the Baphuon and Banteay Srey temples, meaning that Khmer archery existed earlier than that,” said Channlin.

The passionate researcher said that it showed the strength of traditional Khmer archery and was a way to commemorate the Khmer people who built the territory and temples for later generations.

More importantly, he said, he wanted to show locals and other nationalities about Khmer archery.

“Regarding the shooting stance, I found on the walls of Angkor Wat about 32 gestures. Today we practise only eight at the Royal Archery Club, but we plan to increase that to all 32,” said Channlin.

The Royal Archery Club has more to offer other than archery. Visitors can have a leisurely walk through traditional villages with markets, or have a meal at the restaurant.

Dina is also building a library in the vicinity of the archery club.

“In our planned library, we have some collections of photos, videos, geographical information and tourism sites in Cambodia for all visitors to learn more about our heritage,” said Dina, who is also the founder of Cambodia Amazing Trip Planner.

“We also organise our bungalows according to the military ranks in 9th century style: commander, deputy commander, military unit chief and military personnel.

The bungalows at Royal Archery Club will open to the public as soon as construction is complete.

Dina has already set the price range: Commander and Deputy Commander Bungalows ($35), Military Unit Chief ($25), Military Bungalow ($15) and a camping site that can accommodate up to 250 tents at $10 each.

The learning session lasts 90 minutes with locals paying $5.00 and foreigners $9.00 per person. The traditional Khmer archery performers assist visitors in holding the bow and placing the arrow properly so they do not hurt themselves.

Visitors can choose traditional Khmer archery that was used in ancient times to kill enemies or modern equipment that is used in official sporting competitions.

“For our traditional archery, the bow is made from bamboo, rattan and talipot palm and could be used to hunt animals. Some visitors think that the traditional form of archery is harder to learn,” said Channlin.

1 thought on “Aiming far back: Preserving the ancient art of Khmer archery”