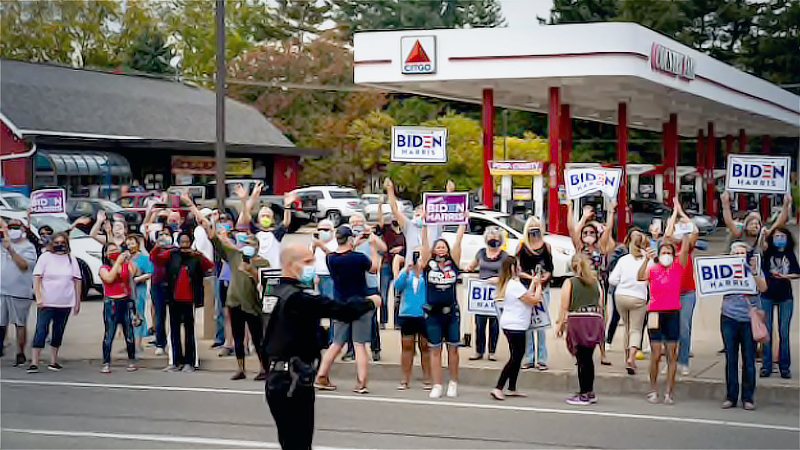 Supporters of Democratic presidential nominee Joe Biden line up along a road in Erie, Pa., where he was traveling Saturday. MUST CREDIT: Washington Post photo by Demetrius Freeman

With little more than three weeks remaining until Election Day, President Trump is in a race against the clock as he continues to trail former vice president Joe Biden by double digits, his standing driven down by distrust on the issue of the coronavirus pandemic, according to a Washington Post-ABC News poll.

The president has not managed to close the gap with Biden during a tumultuous period of events that included the first presidential debate, the debate between Vice President Pence and Sen. Kamala D. Harris (D-Calif.) and Trump’s hospitalization after testing positive for the novel coronavirus. In fact, the race has changed little over a period of months, with voters seemingly impervious to the flood of news and controversies.

National polls reflect the status of the popular vote and not the state-by-state contests for the 270 electoral votes needed to win the presidency. Post-ABC polls of battleground states, as well as other public polls, show Biden with an advantage in that competition as well, though the state margins generally are narrower, and some states are considered toss-ups. Still, no candidate has won an electoral-college majority while losing the popular vote by a margin like Trump’s current deficit.

The major obstacles in the president’s path remain his overall approval rating and how Americans judge his handling of the pandemic. Despite his efforts, he has not been able to change those assessments, and until he does, he will struggle to overtake his Democratic challenger.

Trump’s overall approval rating among registered voters stands at 45 percent positive and 54 percent negative, with 47 percent saying they strongly disapprove. Among those who approve of his job performance, 90 percent favor him for reelection, while among those who disapprove, 93 percent favor Biden. Notably, Trump’s deficit in support to Biden has hovered close to his net approval margin throughout the election.

The president’s ratings on handling the pandemic are slightly worse than his overall marks, with 41 percent of registered voters saying they approve and 58 percent saying they disapprove. Slightly more than 9 in 10 who approve of his handling of the outbreak support Trump for reelection, while nearly 9 in 10 who disapprove support Biden.

Trump’s best ratings come on the economy, where 54 percent of voters approve of his performance and 45 percent disapprove. However, on this measure, there is less symmetry in how this translates into support for him and Biden. Among those who approve of his handling of the economy, 77 percent back the president, and 16 percent favor Biden. Among those who disapprove of his handling of the economy, 96 percent support Biden for president compared with 0 percent for Trump, with the remainder supporting Jorgensen, Hawkins or offering no preference.

The reason for this appears to be voters’ judgment that the president’s pandemic response matters more to them than his handling of the economy as they determine whom to support. Among the 12 percent of the electorate that approves of Trump on the economy but disapproves of the way he has handled the pandemic, 58 percent support Biden, while 19 percent back the president.

Trump is judged harshly both for his handling of the pandemic and for failing to take what people regard as adequate protections to avoid contracting the virus.

Almost 2 in 3 voters say Trump did not take appropriate precautions to reduce the chances of catching the coronavirus, and 6 in 10 say they do not trust the administration to provide complete and accurate information about his health. White House officials have repeatedly refused, for example, to say when the president last tested negative, a key judgment in ascertaining whether he remains contagious as he returns to campaigning.

Just over 6 in 10 say they do not trust what he says about the pandemic, including 48 percent who say they trust him “not at all” in his pronouncements.

The poll finds that about 6 in 10 voters say they believe Trump is healthy enough to carry out his duties as president. The president has said he feels good and, after holding an event at the White House on Saturday, he plans to travel to Florida on Monday for a rally.

Still, given Trump’s illness and an increase in coronavirus cases in many states, the pandemic continues to cast a shadow over the election. Nearly 8 in 10 registered voters say the virus is somewhat under control or not at all under control, although the percentage who say it is not at all under control has dropped from 49 percent in August to 35 percent this month. Nearly 2 in 3 say they are “very” or “somewhat” worried that they or a family member might catch the virus, and 8 percent say an immediate family member has been infected.

Although most Americans do not trust what Trump says about the pandemic or his handling of it, a 63 percent majority say they have confidence in the federal government as a whole to handle the outbreak, views that are nearly identical to findings in March.

Trump has sent mixed signals, at best, about wearing a mask and has disparaged Biden for his more rigorous mask-wearing and social distancing. When he returned from the Walter Reed National Military Medical Center last week, Trump made a show of quickly removing his mask as he stood on the balcony at the White House.

Trump’s practices and pronouncements run counter to the views of a majority of the country, however. The poll finds that about 3 in 4 registered voters say that wearing a mask and practicing social distancing can reduce the chances of contracting the virus “a great deal” or “a good amount.”

Among the 56 percent who say those practices make a great deal of difference, Biden leads Trump in vote support by 75 percent to 20 percent. Voters who say these reduce risk “a good amount” account for about a fifth of registered voters, and they split 44 percent for Trump and 42 percent for Biden. Among the remaining quarter of registered voters who say these practices are less effective, Trump leads by 85 percent to 11 percent.

Interest in the election continues to be extremely high, with 65 percent of registered voters saying they are following it “very closely,” an increase of 11 points over the past two months. Nearly 9 in 10 say they are certain to vote or say they already have cast their ballots.

The economy is cited as the single most important issue by 29 percent of registered voters, with the coronavirus, equal treatment of racial groups and health care all grouped about equally at about half the percentage of the economy. In the poll, 8 percent say crime and safety is the single most important issue in their vote, a slight decrease since September, after Trump was pushing a “law and order” theme. Republicans and Democrats have strikingly different views on which issues are the most important, with half of Republicans citing the economy, while roughly a quarter of Democrats say the coronavirus outbreak is most important and slightly fewer cite equal treatment of racial groups.

Trump and Biden are trusted about equally to handle the economy, while Biden has a 17-point advantage (55 percent to 38 percent) on dealing with the virus.

Most voters believe Trump has paid too little in taxes, following a September report by the New York Times that Trump paid little or no federal income taxes in recent years. A 56 percent majority of voters say Trump has not paid his fair share of taxes, including nearly half who say this “strongly.” Over 9 in 10 Democrats and almost 6 in 10 independents say the president has not paid a fair share of taxes, while about 7 in 10 Republicans say he has.

The demographics of the vote highlight the important changes between the 2016 election and this year’s contest. Biden holds a 23-point advantage among female likely voters (59 percent to 36 percent), while Trump and Biden split men, 48 percent each. If those figures hold, both would represent a shift from 2016, when men backed Trump by 11 points and women favored Hillary Clinton by 13 points.

Trump leads by 26 points among White voters without four-year college degrees, which is smaller than his 36-point advantage in 2016, according to a Pew survey of confirmed voters. Biden holds a 31-point lead with White college graduates, which is much better than Clinton’s performance among this group. (Estimates range from plus-17 in Pew data to essentially even in other sources.)

The gender gap is hugely evident in the suburbs, which both campaigns have targeted. Suburban women favor Biden by 62 percent to 34 percent; suburban men lean toward Trump, with 54 percent supporting his reelection, while 43 percent back Biden. Overall, that gives Biden a slight 53 percent to 44 percent edge among all suburban voters.

Another group of closely watched voters this year are those 65 and older. The new poll finds Trump and Biden splitting those voters evenly (Biden 49 percent, Trump 48 percent). Last month, Biden edged Trump 52 percent to 47 percent, although the difference between then and now is not statistically significant. Trump won older voters in 2016 by between seven and nine points.

The Washington Post-ABC News poll was conducted by telephone Oct. 6 through 9 among a random national sample of 1,014 adults, including 879 registered voters and 725 likely voters. Three-quarters of the sample were reached on cellphones, and the remaining quarter were reached on landlines. Results among adults and registered voters have a margin of sampling error of plus or minus 3.5 percentage points; the error margin is four points among the sample of likely voters. Error margins are larger among subgroups.