Pennsylvania emerges as ‘tipping-point’ battleground for Biden and Trump 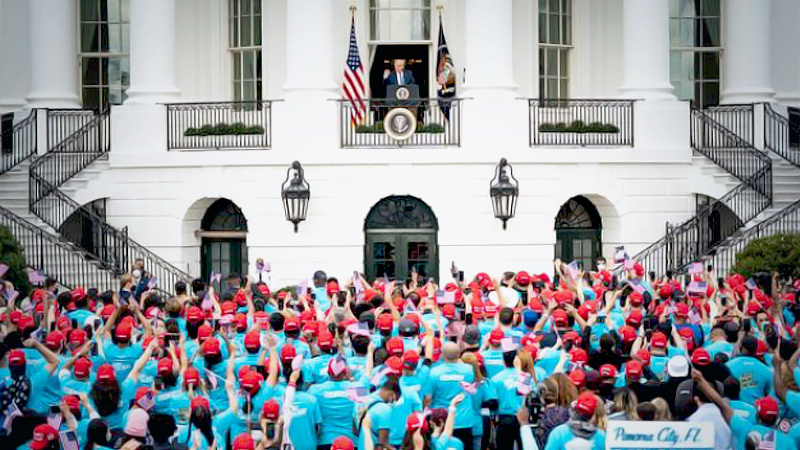 President Donald Trump speaks to supporters from the Blue Room balcony during an event at the White House on Saturday in Washington, D.C. MUST CREDIT: Washington Post photo by Jabin Botsford

By The Washington Post · Michael Scherer, Michelle Ye Hee Lee, Amy Gardner, Josh Dawsey · NATIONAL, POLITICS
WASHINGTON – Both parties are increasingly focused on the pivotal – and potentially messy – role that Pennsylvania could play in deciding the outcome of the presidential race.

President Donald Trump’s campaign in recent days has redirected ad spending there from other northern battlegrounds, while Joe Biden’s campaign and supportive groups are increasing their spending in the state, which between its rolling rural expanses and major metropolitan hubs is seen as a classic political bellwether.

President Trump gestures to supporters as he speaks to them Saturday at the White House. MUST CREDIT: Washington Post photo by Jabin Botsford

Both sides now see Pennsylvania, with 20 electoral college votes, as a must-win prize on the path to the 270 needed to win the White House, according to Democratic and Republican strategists. They also increasingly view the battle for those votes as one that could well continue beyond Election Day – with a growing list of balloting disputes and lawsuits setting the stage, if the race is close, for a contested election reminiscent of the Florida drama that transfixed the nation after the 2000 election.

Supporters of President Trump form a line, without socially distancing themselves, outside the White House ahead of an event Saturday. MUST CREDIT: Washington Post photo by Salwan Georges

Not only is Pennsylvania allowing anyone to vote by mail in a general election for the first time, but all the state’s polling places also have new voting machines, and the rules that govern the vote have been shifting in recent weeks, as the two parties in a state with divided government battle in the courts on multiple fronts.

“It’s pretty clear 25 days out that Pennsylvania will be the tipping point state,” said Bradley Beychok, president of American Bridge, a pro-Democratic group that has spent millions to help Biden and is reallocating from Michigan and Wisconsin. “We have moved most of our budget into Pennsylvania.”

Current polls show Biden with a polling lead, though a similar lead by Hillary Clinton at this point in the 2016 campaign evaporated by Election Day. Both Trump and Biden are increasingly focused on messages they think will help them win the state.

“A lot of white, working-class Democrats thought we forgot them and didn’t pay attention,” Biden said at the end of a Sept. 30 whistle-stop tour through the state outside of Johnstown. “I want them to know – I mean sincerely – that I’m going to be your president.”

Biden visited for the 11th time during this campaign on Saturday, and his campaign plans to start door-knocking there in the coming week. The Trump campaign, which says it has already knocked on 1.8 million doors in the state, has responded by warning that Biden would hurt the state’s fracking industry, an important source of employment in the west. Biden has said he would ban new fracking on federal land as part of a push to a carbon-free economy, but he would not ban the state’s current activity.

Trump returned to the issue Saturday in a campaign address at the White House, saying that Democrats have only recently begun saying they support fracking because of the upcoming election.

“Your energy jobs are gone if they get in,” Trump said.

If his health allows, Trump is expected to make at least six more trips to Pennsylvania, according to an adviser, and the state continues to be blitzed by campaign surrogates, including the president’s children and former New York mayor Rudy Giuliani, who traveled Saturday to Kingston.

Advisers have told him that he is behind three to seven points in the polls but still has time to turn it around, as he did four years earlier.

“He’s asking everyone about Pennsylvania,” said a person with knowledge of internal deliberations, speaking on the condition of anonymity to discuss strategy. “He thinks he’s going to win Ohio and Florida. He thinks he has real work to do in Pennsylvania.”

David Urban, who ran Trump’s campaign in Pennsylvania in 2016 and now works as a lobbyist for TikTok, has repeatedly urged the president and senior aides to visit the state more often and to focus on issues such as guns and fracking.

With a huge population and no clear partisan lean, Pennsylvania has earned its importance from the electoral-college system. The current presidential battle is taking place in states that have long been considered friendly to Republicans, where the race is currently tied in public polls or Biden has a narrow lead. These include Arizona, Georgia, Florida, Iowa, Ohio and North Carolina, where any Trump loss is likely to cripple his reelection hopes.

But simply winning those states will not be enough to keep Trump in the White House, without picking up other northern states. Pennsylvania is by far the best candidate, given its large number of white residents without college educations and partisan registration divide. Other possible routes to victory – like winning Michigan, or some combination of Nevada, New Hampshire, Minnesota and Wisconsin – appear increasingly out of reach, according to public and private polling by both parties.

“It’s hard to see how they win without Pennsylvania in this cycle,” said another prominent Republican strategist working on the presidential race, who was not authorized to speak publicly.

The Trump campaign’s spending, amid difficult economic circumstances, reflects the state’s relative importance. Over the past two weeks, the Trump campaign has pulled down about $13.5 million in television reservations for Michigan, Ohio, Wisconsin, New Hampshire and Minnesota, while adding nearly $3 million to Pennsylvania, according to Advertising Analytics.

Democrats, nonetheless, maintain a massive advertising advantage in the state, with the Biden campaign and supportive groups spending nearly $19 million over the past two weeks in the state, compared with about $10.5 million for Trump and his two biggest outside groups. Both Priorities USA and American Bridge, the two largest Democratic outside groups, have recently increased the share of their spending devoted to Pennsylvania.

“The number of ads is just remarkable,” he said. “Sometimes you see two Joe Biden ads, they go back to the news show, you go to the next commercial and you see two more.”

Casey said he is confident that Biden can maintain his current polling lead, given the shifts among suburban and older voters, but he shares the widespread Democratic concern that the voting and counting process could hamper Democrats’ advantage.

“One hurdle is what I call execution – getting the ballots out,” he said. “The second hurdle is the shenanigans and corrupt practices that Trump’s campaign will engage in.”

The Republican-controlled legislature has not yet approved legislation to allow mailed ballots to be processed before Election Day, meaning it is almost certain that the count will not be completed in a single day and could span weeks.

A federal judge on Saturday dismissed a lawsuit filed by Trump’s campaign seeking to block the use of drop boxes as receptacles for mail ballots, require ballot signatures to match voter registration records and allow nonresident poll watchers at polling places, ruling that the president’s claims of potential fraud were “speculative.”

The win has chilled Democratic concern, but the prospect of ballot challenges and litigation after Nov. 3 remains high. Both parties have assembled an army of lawyers to do battle over such matters as witness signatures, security envelopes and postmark stamps. Officials with both the Trump campaign and Republican National Committee have said they will challenge all ballots that arrive after Nov. 3 with no postmark.

“There are a lot of eyes on the state that’s leading to a sense of increased voter anxiety,” said Suzanne Almeida, interim executive director of Common Cause Pennsylvania, a voting rights group that is involved in some of the litigation. “There’s a universe of potential litigation out there, and I would be very surprised if we don’t see at least some of it after Nov. 3.”

One area of likely dispute after Election Day is “naked” ballots, those arriving at county election offices without an inner security envelope. State law dictates that such ballots are not valid, but earlier this year Secretary of the Commonwealth Kathy Boockvar sent out guidance to counties that such ballots should be counted for the primary election. Following a lawsuit in which the ineligibility of naked ballots was upheld, Boockvar issued new guidance making it clear that naked ballots are ineligible for counting.

Democrats fear that as many as 100,000 naked ballots could arrive and be discarded statewide – a potentially difference-making number of votes in a state that Trump won in 2016 by only 44,000 votes. Biden made a point of explaining the technicalities of voting during his visit to Erie on Saturday.

“Make sure you seal it first in the secrecy envelope,” Biden said. “And then the declaration on the outside of the envelope before you return it.”

Republican lawmakers have recently proposed a select committee on elections in the state legislature, prompting Democrats, including Gov. Tom Wolf, to warn that Republicans are planning to gum up the count by subpoenaing ballots or local election officials.

The Republican speaker of the state House, Brian Cutler, said the proposed committee is meant to study the current election to make recommendations for future improvements to state law.

Another, less likely scenario being gamed out by Democrats is a situation where Trump is ahead as Dec. 14 approaches – the date on which all electoral college electors must meet and vote – but outstanding ballots are expected to favor Biden. Polls have shown more Democrats than Republicans will vote by mail this year, while more Republicans will vote on Election Day.

Federal law empowers state legislatures to step in and appoint electors if an election has “failed” to produce a result. Democrats said they are preparing for the possibility that Republicans will do just that. Cutler, the House speaker, said he has had zero conversations about that possibility.

“I do think Pennsylvania is fundamentally important,” Cutler said. “And I also know that the roughly three weeks we have until Election Day is in many ways a political lifetime. There’s a lot of time yet for the election to continue to transform.”