A gun rights decision provides a preview of the justice Amy Coney Barrett might be, both liberals and conservatives agree 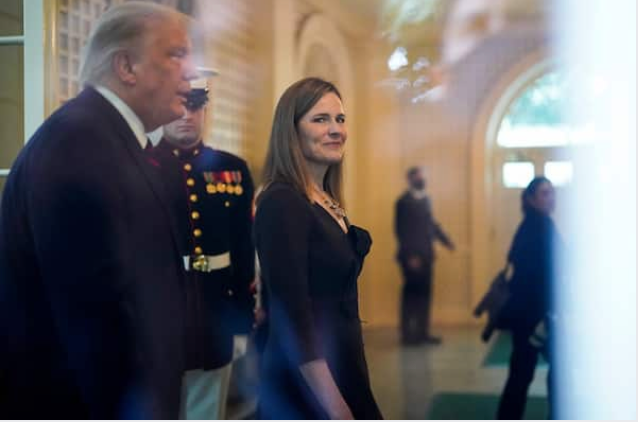 WASHINGTON – Judge Amy Coney Barrett acknowledges that the decision she considers most significant in her relatively short time as a judge “sounds kind of radical”: She doesn’t believe the Constitution gives government the authority to ban all felons from owning guns.

One gun law expert calls the opinion an “audition tape” for the Supreme Court nomination she received, and Democrats plan to argue at Barrett’s confirmation hearings beginning Monday that it puts her far outside the mainstream. Even, they say, to the right of her conservative former boss, the late Justice Antonin Scalia.

“She is extreme on this issue,” said Sen. Richard Blumenthal, D-Conn., a member of the Senate Judiciary Committee. “She would go much farther than her mentor Scalia did in striking down common sense measures.”

Supporters are enthusiastic about Barrett’s 37-page dissent in Kanter v. Barr, in which she argues only those shown to be dangerous may be stripped of their Second Amendment rights to guns, and that simply being convicted of a felony is not enough.

The opinion “shows that she takes the Constitution’s text and history seriously,” said Ilya Shapiro of the libertarian Cato Institute, and is committed to “holding the government’s feet to the fire” when individual rights are at stake.

The opinion – even some liberals who worry about its implications praise its craftsmanship – provides a preview of the kind of Supreme Court justice the 48-year-old former Notre Dame law professor would make.

For one, it shows a deep commitment to “originalist” interpretation of the Constitution, the method used by Justices Clarence Thomas and President Trump’s other Supreme Court choices, Neil Gorsuch and Brett Kavanaugh, to most often reach conservative outcomes.

Certainly it indicates that, if confirmed, Barrett would likely cement a majority more open to reexamining gun control laws that states and cities say are necessary for public safety and that critics contend crimp constitutional rights. Conservative justices have been itching to take on one of the court’s most controversial topics.

And Barrett’s Kanter dissent shows boldness and a propensity for casting off established readings of the law.

She had been on the U.S. Court of Appeals for the 7th Circuit less than a year when the case arrived before her. But she used it to sharply question federal and state laws that have been in place for decades.

She rejected the arguments of the Trump administration’s Justice Department and broke with the views of two fellow Republican-nominated judges on the appellate panel who brought a combined 72 years of experience.

Barrett looked at Scalia’s important caveat in the 2008 landmark decision establishing an individual right to gun ownership – “nothing in our opinion should be taken to cast doubt on longstanding prohibitions on the possession of firearms by felons and the mentally ill” – and saw daylight.

The court’s 5-to-4 decision in District of Columbia v. Heller only offered that up as part of a list of “presumptively” lawful measures, Barrett noted.

“The constitutionality of felon dispossession was not before the court in Heller, and because it explicitly deferred analysis of this issue, the scope of its assertion is unclear,” she wrote.

So she and her clerks set out to do their own analysis, she told a group of students at conservative Hillsdale College last year.

“I had to do a pretty deep dive into the history of the Second Amendment,” she said. Founding-era legislatures were concerned with keeping weapons from those considered dangerous, she concluded, but just being convicted of a certain level of crime was not enough.

“That sounds kind of radical, to say felons can have firearms,” Barrett told the students, but she said her examination found “no blanket authority just to take guns” without showing the person was dangerous.

At the same time, she said, government may take away certain civic rights, such as voting or the ability to serve on a jury, upon being convicted of a crime.

Her position on the felon dispossession issue is at odds with nearly all other federal appeals court decisions on the issue.

Barrett’s elevation to the Supreme Court would pose a “real risk that the court has a majority making decisions to overturn hugely popular laws that save lives. We have an epidemic of gun violence in this country and this kind of reasoning ignores that,” said Kris Brown, president of the Brady Campaign to Prevent Gun Violence, noting Barrett listed the dissent first among her 10 most significant cases in her Senate questionnaire.

But Alan Morrison, a George Washington University law professor who was among the lawyers who defended the District of Columbia’s strict handgun ban that the Supreme Court struck down in Heller, thinks Barrett may be right.

“I agree with her conclusion that if you have a Second Amendment right – and I still have my doubts about it – then surely you ought to worry about people who are going to do dangerous things with guns,” Morrison said.

The plaintiff in the case “may be a crook, but there is no evidence that he is going to be dangerous,” Morrison said.

Rickey Kanter, from Mequon, Wis., pleaded guilty in 2011 to a single count of mail fraud for selling therapeutic shoe inserts that he misrepresented as Medicare-approved through his “Dr. Comfort” business. He was sentenced to a year and one day in prison, ordered to pay $50,000 and to reimburse Medicare over $27 million in a related civil settlement.

After Kanter served his time and paid the penalties, he challenged state and federal laws that prevented him as a felon from ever owning a gun.

It was a case gun-control groups worried about. “There was a real concern in the gun safety community that challengers were identifying very sympathetic plaintiffs in an effort to chip away at the effectiveness of the felon regime,” said Washington lawyer Deepak Gupta, who filed an amicus brief in the case for the group Everytown for Gun Safety.

Felon possession bans “are at the heart of background-check systems, concealed-carry licensing schemes, and many arrests and prosecutions for firearms offenses,” the brief said. “Kanter’s arguments would fatally undermine these systems.”

Judges Joel Flaum and Kenneth Francis Ripple, nominated to the 7th Circuit by President Ronald Reagan, ruled for the government. They said the federal and Wisconsin laws banning felons were sufficiently related to the government’s goal of keeping guns out of the hands of those convicted of serious crimes.

The government had justified the restrictions with studies showing higher recidivism rates among those convicted of even nonviolent felonies, they said. Moreover, courts are not equipped to predict which nonviolent felons pose a risk and which do not, they wrote.

“The highly individualized approach Kanter proposes raises serious institutional and administrative concerns,” Flaum wrote, noting Congress told the Bureau of Alcohol, Tobacco, Firearms and Explosives to abandon a program in which nonviolent felons could seek to have their gun rights restored as too time consuming and costly.

Barrett had a different take, after a six-month and exhaustive historical review. It touches on early state constitutions, founding-era documents and dictionaries and ancient law, such as the 1328 Statute of Northampton – the ancient English statute regulating the carrying of weapons.

She also quotes the colorful line from a law review written by UCLA professor Adam Winkler: “It is hard to imagine how banning Martha Stewart or Enron’s Andrew Fastow from possessing a gun furthers public safety.”

Winkler, the author of the book “Gunfight: The Battle over the Right to Bear Arms in America” and the one who compared Barrett’s dissent to an audition tape, agrees with the judge’s conclusion.

But he said it arguably envisions broader Second Amendment protections than provided by Scalia, who characterized the individual right to own a gun as belonging to “law-abiding, responsible citizens.”

Barrett’s reliance on historical precedent, Winkler said, could jeopardize modern-era policies like “red flag” laws that allow law enforcement officials to remove guns from people at risk of harming themselves or others, and bans on machine guns first passed in the 1980s.

“I don’t think Justice Barrett is going to say you have a constitutional right to machine guns, but this is the question raised by her approach,” Winkler said. “It cuts off innovative reforms and calls into question certain laws.”

Clark Neily of Cato, one of the lawyers who challenged the D.C. law in Heller, said Barrett’s detailed opinion suggests the view: “I know this is a high profile case that will get a lot of attention, and I’m going to walk you through my precise thought pattern, so you won’t have to guess why I came to this conclusion.”

Without Justice Ruth Bader Ginsburg, Neily added, “there’s no doubt that on balance the court can be expected to be more favorable to cases presenting Second Amendment claims.” But he said he would not expect the court to move quickly.

In its last term, though, several of the court’s conservative justices expressed frustration that the court has provided no guidance on Second Amendment issues for a decade; Thomas frequently complains gun rights receive less attention from his colleagues than abortion rights.

Chief Justice John Roberts is thought not to be excited about the prospect of more gun cases. He is the only conservative justice who at one point or another has not publicly disagreed with the court’s decision not to accept a gun-control case.

But Barrett could change the math, and conservatives would no longer need the chief to count to five votes.