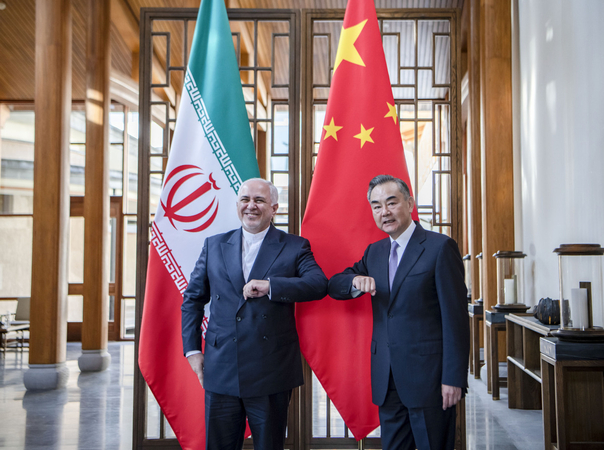 During a meeting with Iranian Foreign Minister Mohammad Javad Zarif on Saturday in Tengchong, Yunnan province, Wang proposed the establishment of the regional multilateral dialogue platform.

The platform would take into consideration the reasonable security concerns of all parties and facilitate dialogue on an equal footing to enhance mutual understanding, Wang said.

China is open to the form and content of the dialogue and all parties are welcome to join the discussion, Wang added.

There has been a lack of a reliable and normal mechanism and platform on the Iran nuclear deal, and as a major country, China has the responsibility and capability to stabilize and resume order in the Gulf region as well as throughout the Middle East, said Gao Shangtao, a professor at China Foreign Affairs University.

Such an initiative is an alternative to the “destructive way” pursued by the United States in handling the Iran nuclear issue by withdrawing from the Iran nuclear deal and slapping sanctions on the country, which has affected trade and intensified tensions in the region, Gao said.

It is a constructive idea and a diplomatic effort, he said, adding that the role the platform could play depends on how many countries could promptly participate in it, especially major countries.

Wang stressed that China is always committed to safeguarding the authority and effectiveness of the Iran nuclear deal and opposes any unilateral practices that break it.

The deal, also known as the Joint Comprehensive Plan of Action, was reached in Vienna on July 14, 2015, by Iran, the five permanent members of the United Nations Security Council－China, Russia, France, the United Kingdom and the United States－plus Germany, and the European Union.

He said China will continue to push forward the implementation of the agreement and UN Security Council Resolution 2231, and promote a political solution of the Iran nuclear issue.

China is willing to work with Iran and other countries to uphold multilateralism, oppose unilateral bullying, and safeguard international fairness and justice and the common interests of developing countries, he said.

Zarif said that Iran fully affirms China’s role in safeguarding the nuclear deal and is willing to work together with China, Russia and the EU to maintain the effectiveness of the agreement.

Also on Saturday, Wang held a meeting with Philippine Foreign Secretary Teodoro Locsin in Tengchong and called for the two countries to continue to manage differences on the South China Sea issue through dialogue and cooperation and to shelve disputes to avoid affecting the improvement and development of bilateral relations.

China is willing to work with the Philippines to promote consultation on the Code of Conduct in the South China Sea to reach an agreement on effective regional rules jointly recognized by China and the Association of Southeast Asian Nations, in order to show the world that China and ASEAN members have the ability and wisdom to maintain peace and stability in the South China Sea, Wang said.

The two foreign ministers agreed to establish a fast-track lane to facilitate the movement of personnel and decided to implement it as soon as possible.

China would like to carry out anti-pandemic cooperation with the Philippines, Wang said, calling on both sides to jointly oppose stigmatization related to the pandemic.

Locsin said that the Philippines is willing to play a coordinating role and work with China to maintain peace and stability in the South China Sea.