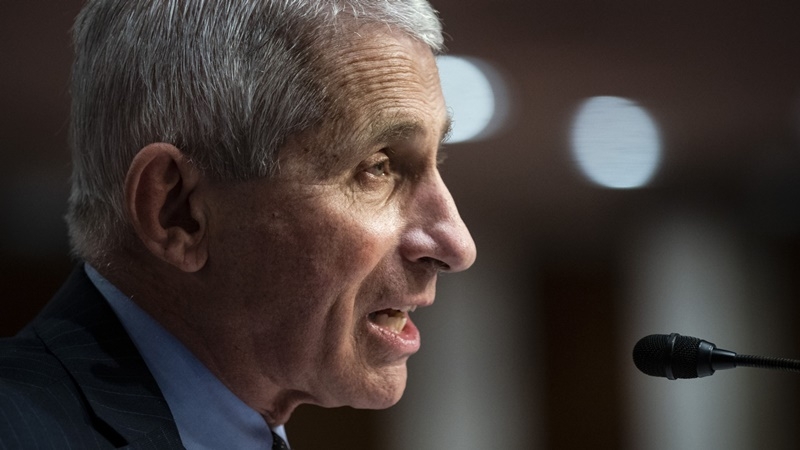 Anthony Fauci, director of the National Institute of Allergy and Infectious Diseases, speaks during a Senate hearing in June 2020.

President Donald Trump’s planned campaign rallies this week — starting with one on Monday night in Florida — threaten to advance the spread of the coronavirus, warned Anthony Fauci, the top U.S. infectious disease expert.

“Look at it purely in the context of public health,” Fauci said on CNN. “We know that that is asking for trouble when you do that. We’ve seen that when you have situations of congregant settings where there are a lot of people without masks, the data speak for themselves.”

Trump’s rallies often feature supporters who are standing close together without masks.

The president returns to the campaign trail on Monday night for the first time since he was hospitalized for the coronavirus, with an outdoor rally planned at the Orlando Sanford International Airport. He is expected to travel to Pennsylvania on Tuesday night, visit Iowa on Wednesday, and go to North Carolina for an event Thursday afternoon.

On Monday afternoon, the physician to the president, Sean Conley, said Trump had tested negative for the virus “on consecutive days.”

In the CNN interview, Fauci also said a Trump television commercial that took comments he made about the president’s response to covid-19 “completely out of context” should be taken down. Fauci said the advertisement was “disappointing” and it would be “terrible” if his comments were used in another ad.

The ad includes a brief clip of Fauci, director of the National Institute of Allergy and Infectious Diseases, saying, “I can’t imagine that anybody could be doing more.” His comment was made during an interview in March with Fox News. When he made those remarks is not shown in the ad.

“These are Dr. Fauci’s own words,” said Tim Murtaugh, a Trump campaign spokesman. “The video is from a nationally broadcast television interview in which Dr. Fauci was praising the work of the Trump administration. The words spoken are accurate, and directly from Dr. Fauci’s mouth.”

The president continues to face criticism, from his Democratic opponent Joe Biden and other critics, over holding events that could spread covid-19.

“We should be doubling down and implementing what we’ve been talking about, which are keeping a distance, no crowd, wear masks, washing hands, doing things outside as opposed to inside in order to get those numbers down,” Fauci said in the CNN interview.

Trump’s decision to resume large-scale rallies risks reinforcing perceptions that he’s been cavalier about a disease that has killed 215,000 Americans and sent the economy into recession.

Asked about Fauci’s remarks about the rallies, Courney Parella, another Trump campaign representative, said, “We take strong precautions for our campaign events. Every attendee has their temperature checked, is provided a mask they’re instructed to wear, and has access to plenty of hand sanitizer. We also have signs at our events instructing attendees to wear their masks.”