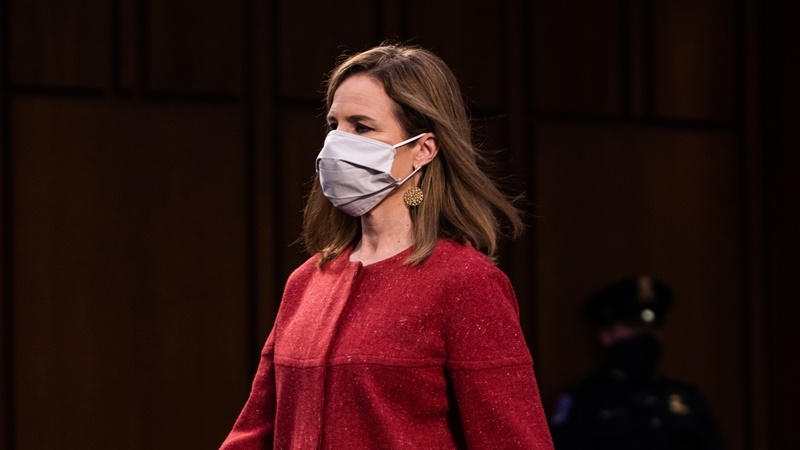 Here are takeaways from the early rounds of questioning.

1. Barrett leaned heavily on precedent to kinda reassure her critics.

The Supreme Court over the years has upheld the Affordable Care Act, same-sex marriage and abortion rights, all issues that could come before the court again in some form. The next iterations would be before a much more conservative legal with Barrett on it.

Barrett wouldn’t comment on how she might decide on any of those issues, except to offer reassurance she adheres to stare decisis. It’s a principle the former law professor explained is Latin for: “Stand by the thing decided and do not disturb the calm.”

Essentially, it means a conservative Supreme Court couldn’t just upend these previous rulings without good reason, including considering what lower courts say and how many people rely on the current law. She used it to offer a skeptical view that the court would, say, overturn legalized same-sex marriage.

But on other major questions about settled law, Barrett dodged. She wouldn’t say how she’d rule on whether a president can delay an election. She wouldn’t commit to recusing herself for a case where she might have conflict of interest. (Democrats want her to recuse herself from any case about the presidential election results.) Nor on how she’d rule on a huge case coming up before the court in November on whether to overturn Obamacare.

Barrett personally opposes abortion, but she has previously acknowledged that the legal right to abortion is settled law. When asked Tuesday if she thought Roe v. Wade was wrongly decided – as one of her mentors, the late Justice Antonin Scalia has said – she would not commit.

Sen. Dianne Feinstein, D-Calif.: Do you agree with Justice Scalia’s view that Roe was wrongly decided?

Barrett: Senator, I completely understand why you are asking the question. But again, I can’t comment or say, yes, I’m going in with some agenda, because I’m not.

Feinstein tried several times, and only got a promise from Barrett to rely heavily on Supreme Court precedent: “I promise to do that, for anything that comes up, abortion or anything else. I’ll follow the law.”

Legal experts on both sides think Barrett would support severely restricting or even overturn abortion rights.

2. She framed herself as more open-minded than her critics paint her.

Barrett’s refusal to say Roe v. Wade was correctly decided will surely give fuel to her critics.

But in one of the first chances Barrett had to talk about why she agreed to be nominated, she had a lot to say to push back on a narrative out there about her. Like:

“I’m aware of a lot of the caricatures that are floating around. So I think what I would like to say in response to that question is that, look, I’ve made distinct choices. I’ve decided to pursue a career and have a large family. I have a multiracial family. Our faith is important to us. All of those things are true. But they are my choices. And in my personal interactions with people, I have a life brimming with people who’ve made different choices and I’ve never tried to impose my choices on them. And the same is true professionally in how I apply the law.”

Under questioning from Senate Judiciary Chairman Lindsey Graham, R-S.C., about whether she could set aside her Catholic faith in deciding cases, she said said “I can.”

3. Despite her prior rulings, Barrett insists she’s “not hostile to the ACA.”

Democrats got no solid answers about how Barrett would rule if she gets on the court in time to hear a Republican challenge to the Affordable Care Act, which the Trump administration is urging the Supreme Court to strike down entirely in the next few months. She said no one at the White House asked how she’d decide and that “the courts should not be politicized.”

But she did distance herself from her own critical views of the court’s previous decisions upholding the Affordable Care Act.

She stuck by her reading of the law then, but she said those challenges are different than the one before the court in November. Republican attorneys general are asking the court to strike down the entire law now that Republicans in Congress zeroed out the tax mandate for having health insurance.

Barrett said the job of the justices is to decide whether the law legally can still stand without a tax mandate – by “severing” the tax mandate from the rest of the law – or whether that’s legally impossible.

“I am not hostile to the ACA,” she said.

Acutely aware of the political debate around how getting rid of the law would make it more difficult for people to get affordable health care coverage, especially those with preexisting conditions, she also said of the upcoming challenge: “It’s not a challenge to preexisting conditions coverage or to the lifetime maximum relief from a cap.”

But preexisting conditions coverage is a huge part of this case, since what the justices decide will determine whether the ACA stands, and that is what guarantees consumers these protections.

4. Trump and his influence loom large

The president hasn’t made things easy for Barrett and Senate Republicans as they try to show that she would be an independent justice fully capable of setting aside her personal beliefs. Democrats ask: What about the beliefs of the person who nominated her to the court? Trump has said he wants the Affordable Care Act overturned, tweeted that it “Would be a big WIN for the USA!” if the Supreme Court strikes it down, and said the court needs nine justices so it can decide any election-related cases.

Sen. Amy Klobuchar, D-Minn., asked Barrett whether the president should be taken at his word in all this. Barrett adeptly dodged by trying to underscore that she’s a different person than the president.

“I can’t really speak to what the president has said on Twitter,” she responded. “He hasn’t said any of that to me. What I can tell you . . . is that no one has elicited any commitment in any case or even brought up a commitment in a case. I am 100% committed to judicial independence from political pressure.”

Barrett tried to separate herself from her personal conservative views. But as Klobuchar pointed out, Barrett has made consistently conservative decisions as a federal judge. The reality is that she is almost certainly going to be a reliably conservative vote on the court.

“The American people,” Klobuchar said, “have to understand that you would be the polar opposite of Justice Ginsburg.”