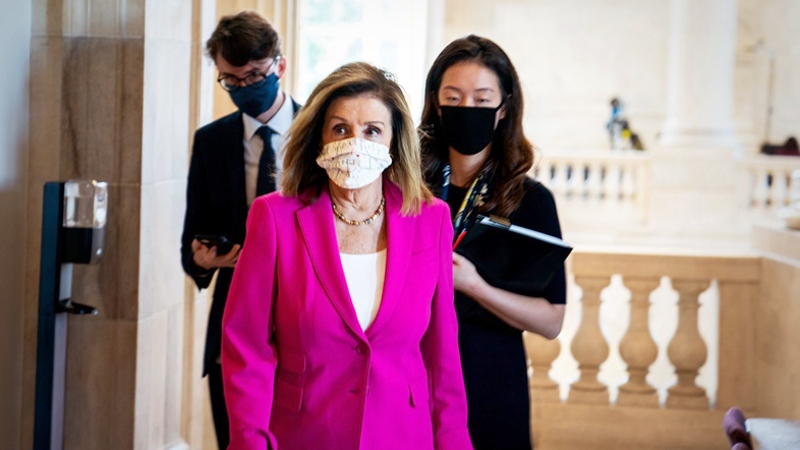 “There are Americans who are being evicted from their homes, they can’t pay the rent. Many Americans are waiting in food lines for the first time in their lives,” Blitzer said as he opened the interview. “Can you look them in the eye, Madame Speaker, and explain why you don’t want to accept the president’s latest stimulus offer?”

“I hope you’ll ask the same question of Republicans about why they don’t really want to meet the needs of the American people,” Pelosi replied.

“We represent these people, I have for over 30 years represented my constituents, I know what their needs are, I listen to them,” she said. “And their needs are not addressed in the president’s proposal. So when you say to me, ‘Why don’t you accept theirs’ – why don’t they accept ours?”

Blitzer interrupted Pelosi to argue that people need the money right now. He brought up Rep. Ro Khanna, D-Calif., and former presidential candidate Andrew Yang, both of whom have suggested Pelosi should take the deal on the table.

“Honest to God, really? I can’t get over it. Because Andrew Yang, he’s lovely. Ro Khanna, he’s lovely. They’re not negotiating this situation. They have no idea of the particulars,” Pelosi said.

“I don’t know why you’re always an apologist and many of your colleagues are apologists for the Republican position,” Pelosi said. “Ro Khanna, that’s nice. That isn’t what we’re going to do.”

“Don’t let the perfect be the enemy of the good,” Blitzer told Pelosi.

“I will not let the wrong be the enemy of the right,” Pelosi said.

“Do you have any idea what the difference is between the spending that they have in their bill and we have in our bill?” Pelosi said, outlining benefits such as child care that are absent from the GOP proposal.

“With all due respect, you really don’t know what you’re talking about,” she told Blitzer.

Blitzer suggested that Pelosi should directly call President Donald Trump – who has repeatedly proclaimed he wants a big deal – and get it done.

Pelosi said she does not speak with the president.

“What makes me amused, if it weren’t so sad, is how you all think that you know more about the suffering of the American people than those of us who are elected by them to represent them at that table,” Pelosi said. “It is unfortunate that we do not have shared values with this White House.”

Trump and Pelosi have not spoken in about a year. Meanwhile prospects are quickly dimming for any new stimulus legislation to pass before to the election, even with millions still out of work and multiple signs the economy is slowing.

Mnuchin’s latest offer to Pelosi contained items where the two sides agree, including a new round of $1,200 stimulus checks to individuals. But Pelosi contends there’s still not enough money for state and local aid, unemployment insurance or child care. She has been particularly critical of the administration’s failure to produce a national testing strategy to combat the pandemic.

At the same time, Senate Republicans have revolted against the Mnuchin plan as far too costly, meaning there’s no guarantee any Pelosi-Mnuchin deal could even move in the Senate.

“You’ve been on a jag defending the administration all this time with no knowledge of the difference between our two bills, and I thank you for giving me the opportunity to say that to you,” Pelosi said.

“Madame speaker, these are incredibly difficult times right now and we’ll leave it on that note,” Blitzer said as he tried to wrap up the interview.

“We’ll leave it on the note that you are not right on this, Wolf,” Pelosi said.

“It’s not about me, it’s about millions of Americans,” Blitzer said.

“Don’t let the perfect be the enemy of the good,” Blitzer said again.

“It is nowhere near perfect …we’re not even close to the good,” Pelosi retorted. “Thank you for your sensitivity to our constituents’ needs.”

“I am sensitive to them because I see them on the street begging for food, begging for money,” Blitzer said.

The interview ended at that point.