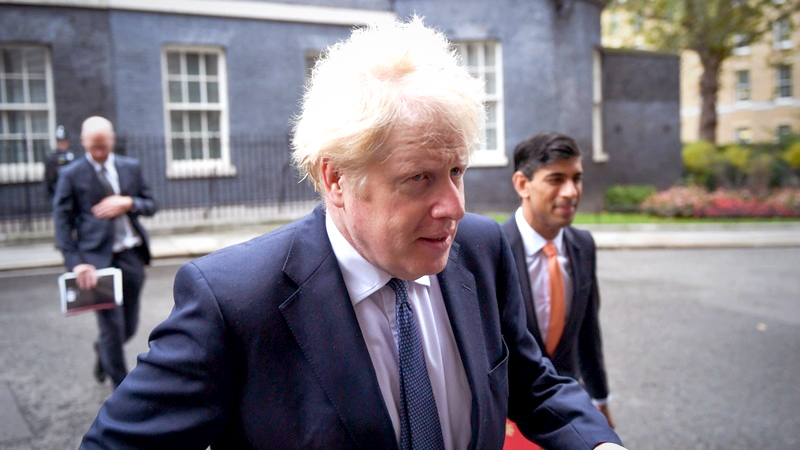 Boris Johnson clashed with his own government’s scientific advisers who wanted tougher action against the resurgent coronavirus outbreak in the United Kingdom in September.

The British prime minister announced Monday that bars and pubs will be closed in the worst-hit parts of England to control the pandemic as he tried to restore clarity and credibility to his much-criticized strategy. He said he hoped to avoid another full national lockdown and that his plan would work if people followed the advice.

Options in a SAGE document circulated Sept. 21 included a short “circuit breaker” national shutdown, more people asked to work from home, bans on contact with other households and the closing of all bars and restaurants.

“Not acting now to reduce cases will result in a very large epidemic with catastrophic consequences in terms of direct Covid-related deaths and the ability of the health service to meet needs,” the committee said.

The split between Johnson and his pandemic advisers will fuel the political battles the premier is now fighting on multiple fronts. On Tuesday, members of Parliament will vote on the latest restrictions as the premier seeks to persuade local leaders in northwestern England to agree to tighter curbs.

“We did take action then,” he told the BBC on Tuesday when asked about the SAGE recommendations on Sept. 21. “We took a balanced view of what was required at that moment. We do think the measures we’ve put in place now are robust. These are serious changes.”

Under Johnson’s new plan, a three-tier system of coronavirus alert levels is being introduced, set at medium, high, and very high, to simplify the imposition of lockdown measures.

In the areas on the highest alert, there will be tighter restrictions on social mixing, bars and pubs will be closed and travel discouraged. But Whitty said local authorities will need to take more action to get the virus under control.

“It is the case we are going to have to do more,” Whitty said. “Probably in some areas significantly more.”

The latest version of the U.K. virus strategy shows again the perils Johnson is facing as he seeks to navigate a pandemic that pitches the protection of public health in direct opposition to the preservation of jobs.

The calculation is particularly awkward in some areas of northern and central England, which switched their support to Johnson’s Tories in last year’s election and are now among the districts where covid-19 is spreading fastest.

The SAGE recommendations – particularly the rejected idea of a short national “circuit breaker” shutdown – probably will fuel the sense in regions facing the toughest restrictions that other options are available that would share the pain across the country.

“A circuit break as proposed by SAGE I think is preferable to a situation where the government, one by one, piles the pressure on local areas to go into tier three,” Greater Manchester Mayor Andy Burnham told Sky News on Tuesday, referring to the new highest alert level. “That will be a path to hardship for people, redundancies, business failure.”

Steve Rotheram, the Labour mayor of the Liverpool City Region which is being put in the highest tier, accused Johnson of “trying to divide us and distract from the fact that they are failing to provide adequate support to go with any restrictions.”

The documents also included criticism of the government’s stuttering coronavirus test-and-trace system. The committee warned it will need to expand quickly, and be matched by financial support to people asked to self-isolate, if its effectiveness isn’t going to “further decline.”

The premier also faces opposition to his virus strategy from some Tory MPs, whose complaints range from lack of parliamentary scrutiny to what they see as unnecessary restrictions on personal liberty.

They’re likely to be further emboldened by advice in one of the SAGE papers that Johnson’s controversial 10 p.m. curfew on bars would have only a “marginal impact” on infections.