Democrats lay out plan for global cooperation on virus 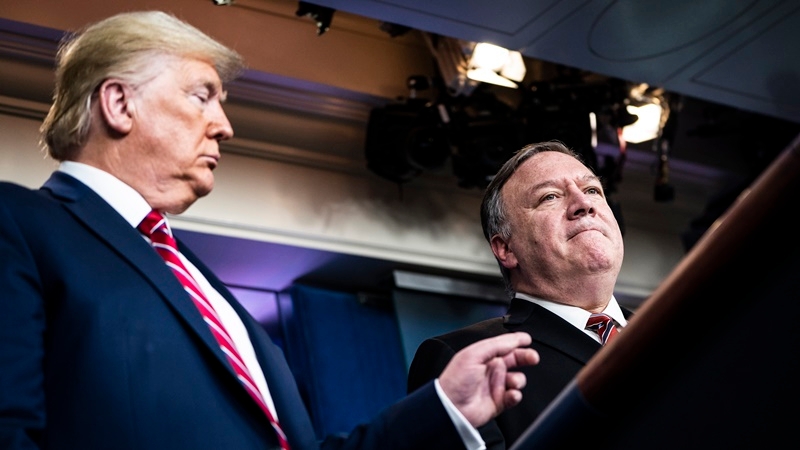 President Trump and Secretary of State Mike Pompeo talk during a briefing on the U.S. response to the pandemic. MUST CREDIT: Washington Post photo by Jabin Botsford.

WASHINGTON – A group of 100 House Democrats criticized the Trump administration’s unilateral approach to the coronavirus pandemic Wednesday and offered a plan for working with other countries to control the crisis and ensure that vaccines can be shared widely and quickly.

The letter, written by Reps. Judy Chu and Brad Sherman of California and Jim McGovern of Massachusetts, says the Trump administration’s antipathy toward China and multilateral organizations hindered coordination with the World Health Organization and the European Union. It also says restrictions on scientific exchanges with Beijing resulted in fewer Americans on the ground in China as the virus began to spread.

“This impeded the ability of American public health officials to receive timely and accurate information about the pandemic, delaying our response and likely costing American lives,” the lawmakers wrote in a letter addressed to Secretary of State Mike Pompeo and Health and Human Services Secretary Alex Azar.

The Trump administration’s response to the virus has become a central focus of the 2020 presidential election, with Democratic nominee Joe Biden accusing the administration of mishandling the pandemic and President Donald Trump warning that Biden is sensationalizing the issue and proposing shutdown measures that would further hurt the economy. The virus has killed more than 215,000 people in the United States.

The letter says the Trump administration’s refusal to join forces in “voluntary patent pools” and participate in international summits has “hampered global efforts to ensure that coronavirus treatments and vaccines, when developed, will be distributed to all who need them.”

In May, the European Union raised more than $8 billion to develop and deploy a covid-19 vaccine during a virtual summit that the United States did not attend. At the time, U.S. officials said the United States had already given $2.4 billion for the coronavirus response but did not provide a reason for not attending.

The letter also criticizes the administration for halting funding and announcing its withdrawal from the WHO, which “further isolated the U.S. from the world, and even from close allies.”

In a response, a State Department spokesman said that although the Trump administration has halted funding to the WHO, the U.S. has invested $142 billion in global health systems since 2001.

“The ongoing global response to the COVID-19 challenge is only possible because of decades of investment by the United States in health systems in countries across the world,” the spokesman said.

The Department of Health and Human Services declined to comment on the Democrats’ letter, which was obtained by The Washington Post.

The Trump administration has struggled to gain the confidence of both elite health experts and the general public in its response to the pandemic.

A Washington Post-ABC poll released this weekend found that only 37 percent of registered voters trust Trump’s words about the coronavirus and only 29 percent believe he took the appropriate measures to reduce the risk of catching it as opposed to 65 percent who believe he did not. Trump consistently polls higher on his handling of the economy.

Experts continue to broadly criticize Trump’s opposition to the WHO, saying collaboration is critical to fighting the virus’ spread.

“It has no real justification,” said Tom Inglesby, a director of the center for Health Security at Johns Hopkins University. “When this pandemic is over, countries around the world will remember that the U.S. didn’t lead and didn’t help them. It’s a complete reversal of long-standing U.S. leadership in global health, and I hope the decision is reversed and the U.S. re-engages.”

In defense of the halt in funding, the State Department spokesman said the Trump administration identified problems at the WHO and steps it could take to address them.

“We urged the organization and its member states to act with urgency to correct these failings, but no action was taken,” the official said. “As a result, the United States shifted its resources to more credible and transparent partners.”