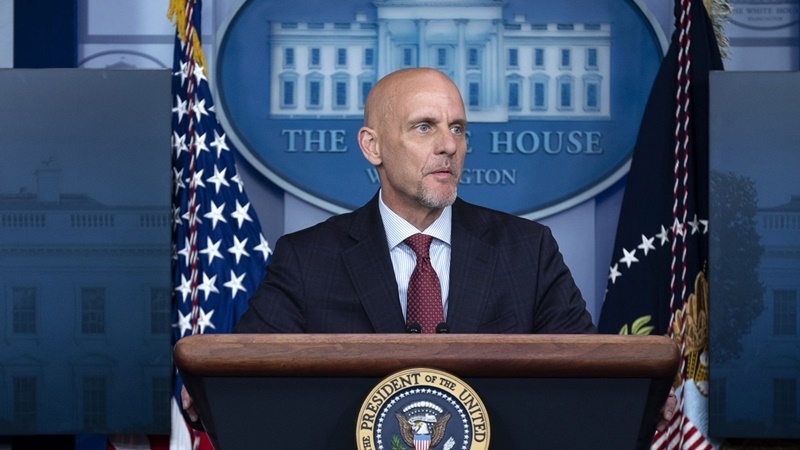 Stephen Hahn, commissioner of food and drugs at the Food and Drug Administration, during a news conference in at the White House in Washington D.C., on Aug. 23, 2020. MUST CREDIT: Bloomberg photo by Stefani Reynolds.

A series of trial stops are part of the system to make sure any covid-19 vaccine or therapy will be safe, Food and Drug Administration Commissioner Stephen Hahn said.

“Probably the most important part of clinical trials is to ensure safety as much as possible, certainly for the participants in the trial, but also to look at safety issues should an application come before FDA,” Hahn said in a 30-minute phone interview in which he discussed ongoing vaccine trails, how long it will take the FDA to review an application for a vaccine, public confidence in the agency and drugmakers, and more.

Bloomberg spoke to Hahn Wednesday morning. This conversation has been edited and condensed for clarity.

Q: In the last few days Johnson & Johnson’s vaccine study was paused after a volunteer got sick and Eli Lilly’s antibody study halted enrollment over a safety concern. AstraZeneca’s vaccine has been on hold since early September. Are these speedbumps in the race for covid-19 therapies and vaccines? Or are there worrisome setbacks developing here?

A: The system was designed to identify safety issues. These safeguards are really important and built in to protect subjects of trials, but also ultimately to get to the right answer regarding the safety and efficacy of a therapeutic or vaccine.

Q: AstraZeneca’s vaccine trial has been on hold for more than a month now, though. What’s taking so long? From what we know, this was mostly about a single patient who got sick. That doesn’t seem like something that would result in this long of a delay.

A: I can’t speak to a specific application or discussion with a company. What I can tell you is, we want to be very thorough in our assessment, whether effectiveness data or safety events. We have a give-and-take with companies. Sometimes that takes a short period of time. And sometimes that takes longer.

Q: Johnson & Johnson’s vaccine uses a similar mechanism to AstraZeneca’s. Are you concerned at all about a broader safety issue?

A: It’s our responsibility to understand what effects there might be across a class. It’s one of the reasons that it’s so important for us to maintain confidentiality, because we need companies to be forthcoming. That way we have a very broad look.

Q: Last week, Peter Marks (the official who leads the FDA office overseeing vaccines) was asked about the hold on the AstraZeneca vaccine. He said the FDA could use a “commissioner’s finding” to disclose safety information if a drugmaker wasn’t forthcoming. He was clear he wasn’t talking about any one company, but some people saw that as a warning to AstraZeneca.

A: I spoke to Dr. Marks. I do not think that his reference was related to one company.

We certainly would like to use our regular means. And we always encourage, in particular when safety is an issue, for there to be transparency. So the commissioner’s finding could be used. I think Peter was just indicating that there are other means by which safety information and other clinical trial information could be released to the public.

Q: To be clear, are you saying that there is specific information about a vaccine that FDA is looking at disclosing? Or are you speaking hypothetically?

A: It’s hypothetical. That was definitely not a reference to any specific company or any bit of information that we have.

Q: There was a report yesterday by Politico that the FDA had been asked to refer to any emergency approval of a vaccine as “pre-licensure,” not an “emergency use authorization,” and that you rejected that approach.

A: There are differences between the emergency use authorization and a biological license application. It was very important to the agency to make sure that was understood. We felt strongly that we didn’t want there to be any question about what we were trying to communicate.

Q: The FDA had been working on a guidance document that laid out the standards for emergency authorization vaccine for some time, but that ended up in a lengthy review by the White House. And then you all released the contents on your own. Some people thought this was an end-run around the White House. What happened here?

A: The document went through a routine clearance process that we use through the agency and then to HHS and then to the White House. Some documents take longer than others. There’s give and take, because there will be questions that are raised about what our intent is.

We had communicated for the last six to eight weeks with manufacturers of vaccines about our criteria or emergency use authorization, which ultimately ended up in that document. It was our obligation to make sure that we provided that information so it could be discussed with the experts on that committee.

Q: There was a reaction from the White House about this, though, either because of what FDA did or from the resulting media coverage about how it would push back a vaccine past the election. President Donald Trump accused the FDA of “just another political hit job” and tagged you in his tweet.

A: Do you have a question?

Q: I want to get your reaction to that. You’ve talked about making sure the public doesn’t think this is a politicized process. Is the horse-race analysis on if a vaccine will be ready, for example by election day, by the president and others, unhelpful?

A: We have consistently, and will consistently, follow our procedures and processes that our career scientists have determined is the best way to proceed. This is, from FDA’s perspective, not a politicized process. Of course we’re concerned that the public feels that this may be politicized, but I want to reassure the public that it is not.

Q: There was another poll that came out yesterday showing increased skepticism of a vaccine. You’ve said, repeatedly, that science will guide any assessment of a vaccine. But you’re just one voice. What needs to happen to restore public confidence?

A: Having a conversation like this with you is helpful. The broader the audience that FDA can reach, the better that will be.

At the end of the day, from FDA’s perspective, being transparent about what criteria we’re going to use and transparent about the process, and then following that when an application comes to us, that will be very important. The process will be followed and the American people will see that we will be transparent. We would like that to instill further confidence in the process, but more importantly in any vaccine that might or might not be authorized or approved.

Q: There’s a first meeting of the FDA’s vaccine advisory committee in about a week. Do you expect to have an application by then?

A: I can’t predict that. When the companies decided that their data are mature, we will have that conversation. We’re prepared. Everybody wants this to be done in an expeditious way. But as I’ve said before, we’re going to follow our procedures. We’re not going to cut corners.

Q: How quickly could you move once you have a vaccine application?

A: It really depends on the data. Biological license application reviews can take months. Thousands, if not tens of thousands, of pages. We don’t just look at a scientific paper or a press release. We actually look at the raw data and analyze it on our own. So it can take some time.

We have all hands on deck. If an application were to come to us that demonstrates that potentially tens of thousands, if not hundreds of thousands of lives, could be saved, we have every interest and intention to work quickly get that product to the American people, while paying very close attention to the safety.

Q: One last question. There’s an election next month, and a potential change in administration. You might only have a few months left in your tenure. What’s left on your agenda that you want to get done?

A: First, data modernization. Congress has been very generous in allocating funds for this. You’ve seen throughout the pandemic how real world evidence has helped inform decisions around diagnostics and therapeutics. It will help us if a vaccine is authorized, how we assess safety after an authorization.

We have had incredibly successful year recruiting people to FDA. Obviously we have a huge workload, it’s been doubled during covid-19 and we made a special emphasis to recruit people who have expertise in issues like data management, data access.