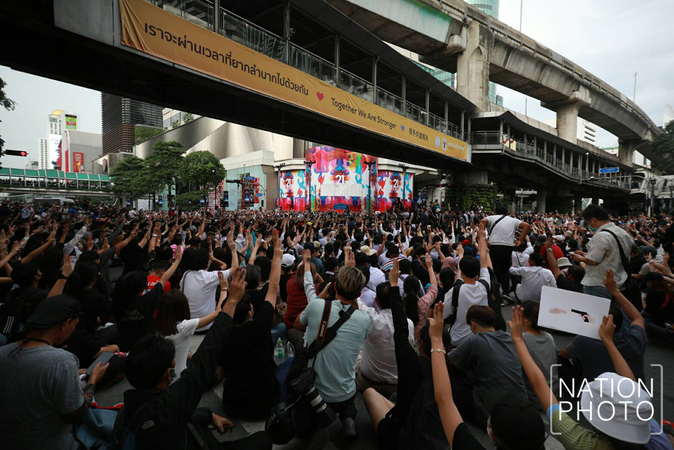 Protesters at Ratchaprasong Intersection decide to sit down after failing to push back a police cordon surrounding their rally.

Large numbers of school and university students, many wearing their student uniforms, joined the anti-government protest in Bangkok on Thursday.Protesters rallying at Ratchaprasong Intersection in defiance of an overnight ban raised the three-finger salute against dictatorship and chanted “release our friends” – referring to the dozens of protest leaders arrested since Tuesday. They also chanted “my tax money”, in reference to the protest movement’s calls for more transparency in allocating government budget to the Palace.

Tensions between protesters and police at Ratchaprasong began to ease at 5pm as rally leaders including Panupong Jadnok called for calm and emphasised the non-violent character of protests so far.

Protesters began gathering at the intersection at 4pm, after police cleared their camp at Government House overnight in response to the sudden imposition of citywide emergency rule by the prime minister. Police were deployed to the intersection and surrounding area in force, preventing the protesters from moving out of the rally site.

The crackdown on protest leaders continued on Thursday with news that Arnon Nampa, prominent activist and human-rights lawyer, has been flown to Chiang Mai to face sedition charges for speaking on monarchy reform at rallies in Chiang Mai and Pathum Thani.

Facebook accounts belonging to Arnon and fellow protest leader Prasiddhi Grudharochana have disappeared, after Arnon posted he had been denied access to a lawyer.