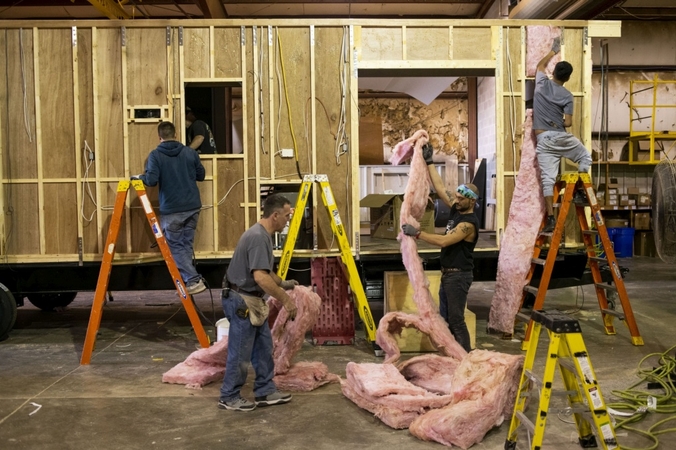 Workers install insulation on the sides of a recreational vehicle at a facility in Elkhart, Ind., on Oct. 8, 2020. MUST CREDIT: Bloomberg photo by Ty Wright. Photo by: Ty Wright — Bloomberg Location: Elkhart, United States

Applications for U.S. state unemployment benefits unexpectedly jumped last week to the highest since August and more Americans moved to longer-term aid, underscoring a recent slowing in the pace of the labor market’s recovery.

Initial jobless claims in regular state programs totaled 898,000 in the week ended Oct. 10, up 53,000 from the prior week, Labor Department data showed Thursday. On an unadjusted basis, the figure posted the largest one-week increase since July.

Continuing claims — the total number of Americans claiming ongoing unemployment assistance in those programs — fell 1.17 million to 10 million in the week ended Oct. 3.

But that may partially reflect people exhausting state aid and moving to Pandemic Emergency Unemployment Compensation, the federal program that provides up to 13 additional weeks of jobless benefits. The PEUC figure rose by 818,054 to 2.78 million in the week ended Sept. 26, on an unadjusted basis.

Even so, the latest figures showed initial claims rose on an unadjusted basis in more than half of U.S. states, pointing to broad-based headwinds for the labor market as virus cases pick up again and colder weather starts to curb demand for outdoor dining, threatening the viability of many restaurants. The report may also reflect tens of thousands of recent job cuts at the nation’s airlines.​

U.S. stock futures and 10-year Treasury yields remained lower after the report, while the dollar was higher.

Like in the prior two reports, California’s initial claims number remained frozen at the mid-September level despite the ending of its two-week pause in accepting new claims. A spokesperson for the Labor Department said the data will continue to reuse the prior number until California’s reporting normalizes in the wake of the pause.

The supplemental $600 a week in jobless benefits authorized by the CARES Act in late March expired in July, and since then lawmakers have been at a stalemate over another large stimulus bill.

However, with less than three weeks until the Nov. 3 presidential election, an agreement is increasingly in doubt, adding risks that declining income will weigh on consumer spending.

For the latest week, initial state claims were expected to total 825,000 and continuing claims to fall to 10.6 million, according to the median estimate in a Bloomberg survey of economists.