Trump’s debts are the least mysterious aspect of his finances 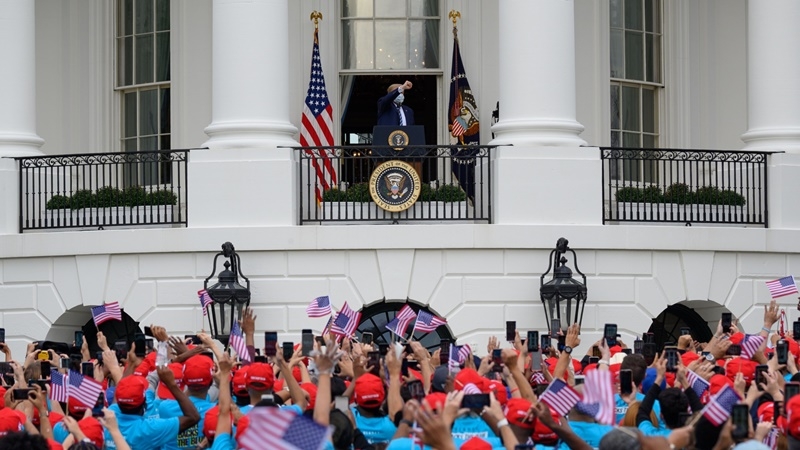 President Trump gestures while arriving to speak from the Truman Balcony of the White House in Washington on Oct. 10, 2020. MUST CREDIT: Bloomberg photo by Erin Scott.

When President Donald Trump appeared on an NBC town hall Thursday evening, moderator Savannah Guthrie posed a question that has come up a lot over the past two weeks.

“Who do you owe $421 million to,” Guthrie asked, citing a recent New York Times story on Trump’s tax returns that said the obligations will come due in the next four years.

The idea that his creditors are a mystery became something of a meme in the wake of the newspaper report, which said that lenders often aren’t identified on tax returns.

But the identities of Trump’s lenders have been known for a half decade. In 2015, then-candidate Trump filed his first personal financial disclosure with the U.S. government. It listed debt-encumbered properties, names of firms that issued the loans, maturity dates and a range of the value of the debt.

What’s more, because the loans are mortgages, they exist in the public record, with county registrars and, in some cases, in commercial mortgage-backed securities.

The majority of Trump’s liabilities can mostly be lumped into three groups: loans issued against his office properties by commercial real estate lender Ladder Capital; loans issued by Deutsche Bank against comparatively risky properties like his Washington hotel and Doral Resort; and loans taken out by Vornado Realty Trust against two office towers in which he holds minority interests. Other loans are mostly older and smaller.

The $421 million figure cited by the Times is a personally guaranteed subset of a least $600 million of loans that Trump’s company owes. On top of that, about $450 million of debt is tied to his 30% ownership in the Vornado office towers.

Some of the loans have been sold into commercial mortgage-backed securities, and are now owned by a large number of other investors — some of whom can’t be easily identified. They typically include pension funds, insurance companies, hedge funds and other institutional investors.

Given the fragmented nature of the ownership of that debt, it’s unlikely that even the Trump Organization has knowledge of those investors or contact with them about the loans. If issues arose with the debt, communications would typically be done through an intermediary called a loan servicer.

Many of the loans will come due in the next few years, but Trump, whose earlier career included a series of bankruptcies, probably has some flexibility.

That left both properties with a relatively low amount of leverage for Manhattan real estate, suggesting either a newly learned financial conservatism on Trump’s part or a squeamishness on the part of Ladder Capital, Trump’s second-biggest lender after Deutsche Bank.An August appraisal of the buildings by the Bloomberg Billionaires Index, based on current net income and prevailing capitalization rates, was less rosy, valuing them at $365 million and $375 million, respectively. But as long as the pandemic doesn’t crater office values, the properties could carry far more debt, were Trump to need it.

Because Trump made the historic decision to maintain ownership of his businesses, and because the government filing was self-reported, critics and professional ethicists have long worried that Trump could have other, unreported liabilities that could pose conflicts or even a national security risk. But no such liabilities have materialized.

At one point, Trump updated a disclosure to reflect money owed to Michael Cohen, his former personal attorney, who paid adult film actress Stormy Daniels to prevent her from going public with allegations of an affair with Trump.