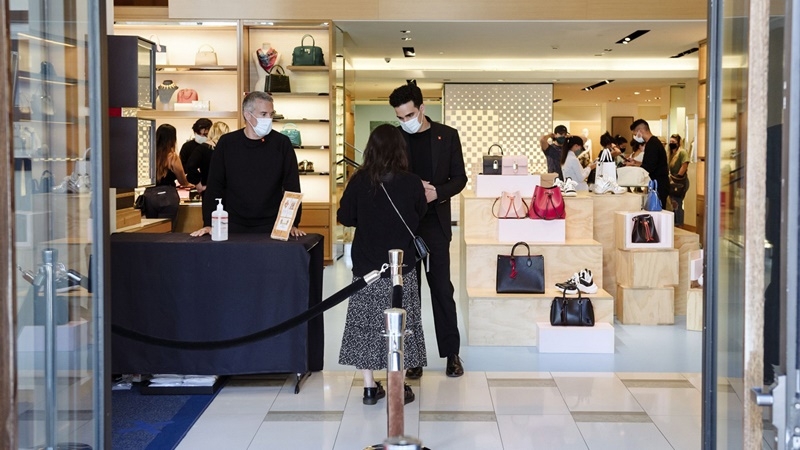 Sales associates greet a customer at a Louis Vuitton store in San Francisco on June 18, 2020. MUST CREDIT: Bloomberg photo by Michael Short.

The value of overall sales increased 1.9% from the prior month after a 0.6% gain in August, Commerce Department figures showed Friday. The median estimate in a Bloomberg survey of economists called for a 0.8% gain. Excluding autos and gasoline, sales rose 1.5%.

The broad-based gain may partly reflect consumers tapping elevated savings, with demand also supported by temporary extra jobless benefits and continued hiring. The economy’s rebound from the pandemic-driven downturn is threatened, though, by a new acceleration in coronavirus infections and Congress’s failure to agree on a fresh stimulus package, developments that appear to be weighing on an already-slowing labor market recovery.

While the $600 weekly payments for jobless Americans expired in July, a temporary program authorized by President Donald Trump provided most benefit recipients about $300 extra a week for a limited time. But funding for that program is dwindling, and the broader dropoff in payments risks a hit to future consumer spending.

“The extra $300 kicked in a lot in September and I think that helped boost consumer spending,” said Ryan Sweet, head of monetary policy research at Moody’s Analytics Inc. “With the absence of additional fiscal stimulus we’re going to start to see spending moderate.”

A separate report Friday showed that U.S. manufacturing production unexpectedly declined in September, the first decrease in five months and a sign of headwinds for the industrial sector as the pandemic keeps its grip on the world’s largest economy. The 0.3% drop in output at factories followed an upwardly revised 1.2% gain in August, Federal Reserve data showed.

Other data showed U.S. consumer sentiment ticked up in early October to a seven-month high on an improved economic outlook, though confidence remained well below pre-pandemic levels.

Another factor at play in the strong retail sales figures could have been back-to-school shopping that was pushed into September, said Michelle Meyer, head of U.S. economics at Bank of America. Supplies are typically bought through the summer, but “this year, with schools going back later, or not at all, or just some confusion as to what that would look like, it could be that people delayed those purchases,” she said.

Before the report, analysts were projecting consumer spending to have advanced at a 37.2% annualized pace in the third quarter following a record 33.2% drop in the prior period. Fourth-quarter gains, though, were forecast to slow to just 3.7%.

All but one of the 13 major categories increased in September, led by clothing, sporting goods and motor vehicles. The only sector to decline was electronics and appliance stores.

With the pandemic has also come a shift in consumption patterns. Total retail sales have surpassed their February level but several industries — including restaurants, clothing and electronics and appliance stores — remain below year-earlier levels. Instead, consumers are spending more at grocery stores, online vendors and building material retailers.

While consumer goods spending on the whole has rebounded to a new high, total outlays, which include both goods and services, lag behind February levels as the pandemic continues to hamper activities such as travel. The Commerce Department will release the September figures for personal spending on Oct. 30.

Growth could moderate in the next three months “but it will still continue to make progress toward that V-shaped recovery,” Chetan Ahya, Morgan Stanley’s chief economist, said on Bloomberg Television. He expects the U.S. economy to reach pre-Covid levels by the second quarter of 2021.