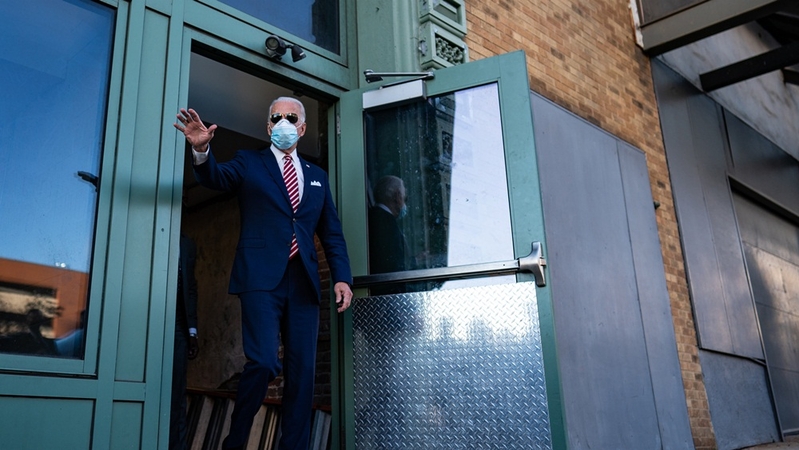 President-elect Joe Biden makes an appearance in Delaware on Monday. Biden said he is focusing on staffing the White House and forming his Cabinet. MUST CREDIT: Washington Post photo by Salwan Georges

President-elect Joe Biden on Monday ratcheted up pressure on the Trump administration to engage in a transition of power, mincing no words on the dire consequences if his incoming team faces further delays in working with federal agencies.

“More people may die if we don’t coordinate,” Biden said during a news conference in Wilmington, Del., following remarks on the economic impact of the coronavirus in which he warned of a “very dark winter” where “things are going to get much tougher before they get easier.”

He also pointed out the absurdity that Sen. Kamala Harris, D-Calif., the vice president-elect, still has access to classified intelligence briefings because she is a member of the Senate Intelligence Committee. But Biden himself is not able to get those briefings because Trump’s administration has yet to acknowledge that Biden won the election.

Biden generally refrained, however, from threatening Trump – “I am hopeful that the president will be mildly more enlightened before we get to Jan. 20,” he said at one point – and he said that the lack of cooperation so far was not yet significantly affecting his ability to build a team and chart a path.

“I find this more embarrassing for the country than debilitating for my ability to get started,” he said.

Biden’s attempt to increase pressure on Trump to behave like previous presidents came on a day the man in the White House began with a declarative, if false, tweet: “I won the Election.”

Trump went on to criticize the Georgia recount being conducted by Republican officials; praise OAN, a competitor to Fox News, which angered him with a correct projection of Biden’s win in Arizona; suggest a challenge to Ohio’s Republican governor, Mike DeWine, after he referred to Biden as the “president-elect”; and vent about Democrats and the news media.

Without entree into the workings and plans of the current administration, Biden said he would focus on meeting with business and labor leaders, staffing the White House and forming his Cabinet.

Two sources on Monday confirmed that Rep. Cedric Richmond, D-La., one of Biden’s earliest backers, plans to join the administration. Richmond, a national co-chair for Biden’s campaign, was one of Biden’s most prominent African American supporters, frequently defending him and campaigning for him dating back to the early days of the Democratic primary.

It was not immediately clear what role Richmond would play, although some Biden allies saw him as a potential senior adviser in the White House.

Richmond did not immediately respond to a request for comment. His plans were first reported by Bloomberg News and confirmed by two sources who spoke on the condition of anonymity to address internal conversations.

Biden also said Monday that Trump’s lack of cooperation had not stopped foreign leaders from calling to congratulate him.

“They’re calling with some degree of enthusiasm – everyone from the Holy Father to prime ministers across the globe,” Biden said. “So we’re moving along knowing what the outcome will be.”

Biden officials see their most crucial disadvantage as being unable to plan for the distribution of a coronavirus vaccine, which would need to be closely coordinated with current Trump administration officials and civil servants who work in important government departments such as Health and Human Services and Defense.

“A vaccine is important. It’s of little use until you’re vaccinated. So how do we get over 300 million Americans vaccinated?” Biden said. “What’s the game plan? It’s a huge, huge, huge undertaking to get it done.”

Ideally, while some work may be underway within the Trump administration to plan for the distribution of a vaccine, Biden officials would be clued in so that their transition to running the program would be seamless. Similar coordinated handoffs have marked previous changes of power.

“If we have to wait until Jan. 20 to start that planning, it puts us behind – over a month, month and a half,” Biden said. “And so it’s important that it be done, that there is cooperation. Now. Now, or as rapidly as we can get that done.”

Top Biden advisers this week are hoping to meet with drug companies, including Pfizer and Moderna, which are developing some of the vaccines, but those meetings would take place outside of government channels and may not include details on government-run distribution. Ron Klain, Biden’s newly named chief of staff, said Sunday on NBC’s “Meet the Press” that the conversations would begin this week.

“But I think in some ways the bigger issue – I’ve been saying this since April – the bigger issue will be the mechanics of manufacture and distribution, getting this vaccine out,” said Klain, who coordinated the Obama administration’s response to the Ebola virus in 2014 and 2015. “And that really lies with folks at the Health and Human Services Department. We need to be talking to them as quickly as possible. . . . It’s a giant logistical project.”

In the 10 days since Biden was declared the winner of the election – and the two weeks since voting ceased – Trump has created a standoff in place of a transition. The transition is unable to fully proceed until the head of the General Services Administration, the low-profile agency the normally handles real estate issues for the sprawling federal government, makes an official ruling. In past elections, that decision has been noncontroversial and typically decided in the hours after the results are clear and called by news networks.

In this case, the administrator – Emily Murphy, a Trump political appointee who has been in the post for nearly four years – is refusing to sign the paperwork while her boss continues to falsely claim that he won the election.

Without it, Biden officials are unable to formally meet with Trump administration officials. They also cannot gain access to thick briefing books prepared for them that detail the inner workings of various agencies.

Biden’s advisers had laid the groundwork for a lawsuit, thinking that they would have standing to argue that Murphy lacked the authority to ascertain the results and make an independent judgment when she is taking instructions from someone who has a stake in the election results.

Biden’s transition team had prepared for the possibility of a lawsuit even before the election, based on Trump’s earlier refusals to commit to a peaceful transition of power.

But over the past week, they have attempted to publicly avoid a drawn-out court fight, with Biden himself last week saying, “I don’t see the need for legal action, quite frankly.” Privately, however, some top Biden advisers say it is still an option they could pursue, while holding out hope that pressure will force a Trump reversal.

Asked Monday what his message was to those who discount the election results, Biden responded: “My message is – I will work with you. I understand a lot of your reluctance because of the way the president operates.”

Biden said he has been communicating with some Republicans and will be contacting others.

“If it has to wait until Jan. 20 to actually become operational, that’s a shame,” he said. “But maybe that’s the only way to get it done.”

Several Senate Republicans – almost all of whom are still unwilling to declare Biden the winner of the election – late last week began calling for Biden to gain access to classified briefings.

Those briefings have not happened, but Biden’s advisers saw the Republican calls as a promising sign.

“The good news here is my colleague is still on the Intelligence Committee,” Biden said, referring to Harris, who joined him on Monday. “So she gets the intelligence briefings. I don’t anymore.”

White House national security adviser Robert O’Brien on Monday seemed to break with other top Trump administration officials in saying that Biden appeared to have won the election and that he planned to help in a transition.

“If the Biden-Harris ticket is determined to be the winner, and obviously things look that way now, we’ll have a very professional transition from the National Security Council. There’s no question about it,” O’Brien said at the Global Security Forum, an annual forum that was held virtually because of the pandemic.

Former first lady Michelle Obama on Monday wrote a lengthy post on Instagram, recalling the personally painful process of transitioning to Trump’s White House, but saying that doing so reflected respect for the election results.

“This isn’t a game,” Obama wrote in a post accompanied by a photo of her and President Obama leaving Washington after Trump was sworn in. “So I want to urge all Americans, especially our nation’s leaders, regardless of party, to honor the electoral process and do your part to encourage a smooth transition of power, just as sitting presidents have done throughout our history.”

Pressure has increased on Murphy, meantime, with MoveOn delivering a petition to the GSA on Monday with more than 268,000 signatures calling on her to declare Biden the winner and authorizing the transition.

Murphy recently sent a message inquiring about possible employment opportunities next year, according to an ABC News report, in an apparent acknowledgment that she will be working elsewhere in 2021.

A spokeswoman for Murphy did not respond to requests for comment on Monday.

Rep. Don Beyer, D-Va., who led the Obama administration’s transition at the Commerce Department in 2008, called the job search “an act of gross political hypocrisy” and at “the worst possible time to refuse to honor one of our country’s most sacred democratic norms.”

“Administrator Murphy knows who won the election, and her job search confirms it,” Beyer said. “While she is prioritizing her own future and helping Donald Trump weaken our democracy, Americans are dying by the thousands in a pandemic that is raging out of control. Murphy must put the country first and allow the transition to move forward.”