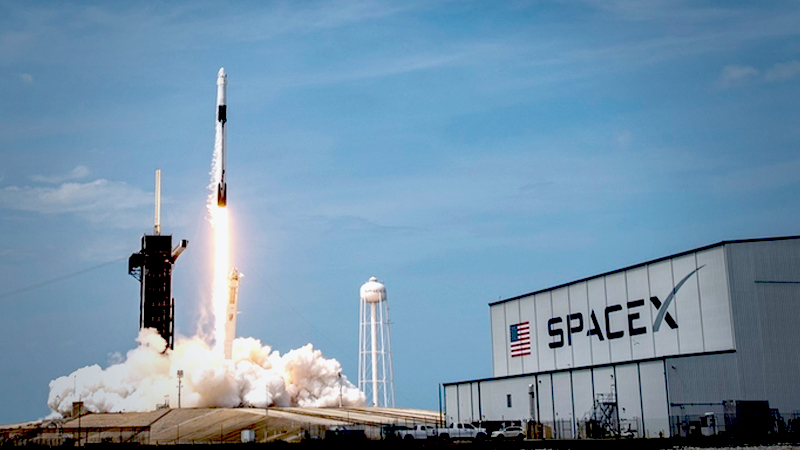 SpaceX launched its first crewed capsule to the International Space Station at the Kennedy Space Center in Cape Canaveral, Fla., on May 30, 2020. MUST CREDIT: Washington Post photo by Jonathan Newton

The Dragon capsule is scheduled to arrive at the orbiting lab at about 11 p.m. Eastern time on Monday, more than 27 hours after blasting off from Kennedy Space Center in Florida. The first stage of SpaceX’s Falcon 9 rocket successfully landed on a drone ship about nine minutes after lift off.

The Crew-1 mission marks a crucial milestone in the development of a space industry in which private-sector companies provide business and tourism services in low-earth orbit. Following the retirement of the Space Shuttle in 2011, NASA awarded Elon Musk’s SpaceX and Boeing Co. nearly $7 billion in contracts to build new transport systems to the space station as part of the agency’s Commercial Crew program.

“A great launch!” said President Donald Trump in a tweet. President-elect Joe Biden called it “a testament to the power of science and what we can accomplish by harnessing our innovation, ingenuity, and determination.”

SpaceX’s first operational trip to the orbital lab followed a test flight with a two-person crew that returned to the planet three months ago. The latest launch occurred 18 years after Musk founded Space Exploration Technologies Corp. with the ultimate goal of populating other planets.

The Crew-1 mission launched two days after officials at the National Aeronautics and Space Administration determined that Musk, who may be infected with coronavirus, had no physical interactions with key personnel.

Musk tweeted Sunday morning that he had “no symptoms right now,” after saying a day earlier that he “most likely” has a moderate case of Covid-19. He said late Thursday that he’d tested positive and also negative for Covid-19 in four tests, and was experiencing mild cold symptoms.

Beyond becoming the U.S. space agency’s first regular commercial launch, the Crew-1 mission is also the first human orbital flight licensed by the Federal Aviation Administration. The regulator is assuming responsibility for public safety because the flight will be conducted by a commercial company.

The Crew-1 astronauts are set for a six-month sojourn aboard the space station, where they’ll join two Russians and an American. The Dragon’s crew is comprised of three astronauts from the U.S. and one from Japan:

– Commander Michael Hopkins, 51, a U.S. Air Force colonel and test pilot, is making his second trip to the space station, seven years after his first. He’s joined by three others on the mission:

– Shannon Walker, 55, a physicist and Houston native, is serving her second stint on the orbiting lab.

– Victor Glover, 44, a Navy pilot from California, is taking his first flight to space. He’ll be the first Black astronaut to stay on the space station for a full six-month rotation, according to NASA.

– Soichi Noguchi, 55, a Japanese astronaut and aeronautical engineer, has the most space experience among the crew. With Sunday’s flight, he has left the Earth on three vehicles: Russia’s Soyuz, the Space Shuttle, and the SpaceX Dragon.