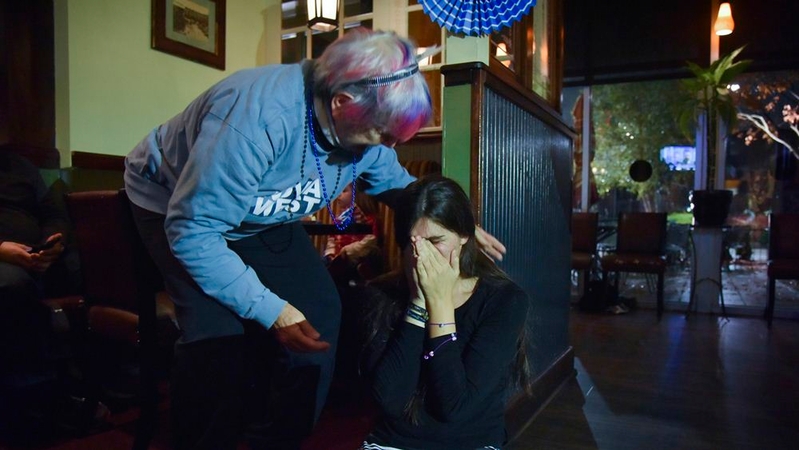 With her win in 2017 for a Virginia House of Delegates seat, Danica Roem, D-Prince William, became the first transgender legislator elected in the United States. MUST CREDIT: Washington Post photo by Jahi Chikwendiu.

By The Washington Post · Samantha Schmidt, Emily Wax-Thibodeaux · NATIONAL, POLITICSIn the weeks leading up to the election, the calls to Julian Harris’s office kept coming in, and the waitlist kept growing.

There was an urgency to the phone calls. Harris, a licensed independent clinical social worker in Silver Spring, Md., who caters to the LGBTQ community, said many of the callers were transgender people seeking counseling services, fearing another four years of a Trump administration that has repeatedly attacked the rights of their community. Other clients were rushing to get legal name changes or surgeries scheduled before the election, worrying it could become more difficult in a second Trump term. At Whitman-Walker, an LGBTQ-focused community health center in D.C., the director of gender-affirming services estimated a 75% increase in the number of requests from transgender people seeking referrals for surgery in the weeks before the election.

But on Nov. 7, when major news outlets called the election for Joe Biden, the transgender community watched as the president-elect specifically mentioned them in his victory speech, the first U.S. president-elect in history to do so.

“All of a sudden, they slept well that night,” Harris, who is a transgender man, said his clients told him. “A weight had been lifted that they didn’t even realize was so heavy.”

It was only one word, but the mention of the transgender community in Biden’s acceptance speech was a symbolic shift from a presidential administration that has spent the past four years repeatedly erasing protections for transgender people – in health care, federal employment, federal prisons, homeless shelters and other housing services receiving federal funds.

The Trump administration has banned transgender members of the military and rescinded Obama-era guidance that offered protections for transgender students. It has declared that the federal Title IX rules require schools to ban transgender students from participating in school sports corresponding to their gender identity.

“Over the course of these four years I think a lot of trans people have looked on in horror,” said Gillian Branstetter, a transgender advocate and media manager at the National Women’s Law Center. “It looked to many that we were a bigger priority to our enemies than we were for our friends.”

The incoming Biden administration has already committed to reversing all of those actions and has released a lengthy platform touching on issues that were until recently rarely mentioned by national politicians. Biden has pledged to work to end what he calls an “epidemic” of violence against transgender people, particularly transgender women of color. He has committed to expanding access to health care for the LGBTQ community and ensuring their fair treatment in the criminal justice system. He plans to prioritize enacting the Equality Act, guaranteeing LGBTQ protections under civil rights laws, and to collect data on a community that advocates say has long existed in a vacuum of information.

“I think Joe Biden knows the trans community in a way that maybe previous presidents have not,” said Ruben Gonzales, vice president of the LGBTQ Victory Institute, which works to advance LGBTQ public leaders.

Beyond his policy plans, Biden has touted his relationships with the transgender community. Years ago, he wrote the foreword to a memoir by Sarah McBride, who this month was elected the country’s first transgender state senator, in Delaware. In 2017, the former vice president called Virginia Del. Danica Roem to congratulate her on the night that she became the first openly transgender elected official.

But not all transgender advocates are convinced by Biden’s symbolic gestures and campaign promises. Many feel his policies won’t go far enough to address the systemic problems facing transgender people – especially transgender women of color – in housing, employment and the criminal justice system.

Others fear the conservative resistance to the transgender community will continue long after President Donald Trump leaves office, in state houses and in the courts.

“As far as political problems go, they are far bigger than Trump,” Branstetter said. “Trump’s exit won’t erode them for us.”

While the Trump administration froze or reversed many of the rights and protections the transgender community gained under President Barack Obama, it also galvanized a swell of transgender activism, including transgender young people and their parents testifying in legislatures across the country, and a growth in transgender visibility and acceptance.

More than 6 in 10 Americans said they have become more supportive toward transgender rights compared with five years ago, according to one 2019 survey from the Public Religion Research Institute. More than 8 in 10 Americans favor protections for LGBTQ people in jobs, public accommodations and housing, and more than two-thirds of Americans favor allowing transgender people to serve in the U.S. military, support that has slightly increased since 2017, according to the PRRI.

In June, the Supreme Court ruled that the federal law barring employment discrimination on the basis of sex also applies to gay and transgender people, a landmark victory that could ripple across many realms of American life. That same month, an estimated 15,000 people marched in a striking show of support for Black transgender lives in New York City. And in this year’s election, a record number of LGBTQ candidates ran for office, including several transgender people elected to state legislatures.

Now, advocates are calling on Biden to appoint LGBTQ people – including transgender people – to positions in the White House.

Raffi Freedman-Gurspan, the first openly transgender appointee in the Obama White House, served as the primary liaison to the LGBTQ community and as an outreach and recruitment director in the Presidential Personnel Office. She said the Obama administration appointed six transgender people to roles in the White House over the years, and she hopes Biden will go further. “I’m not going to be surprised when we hear about our first nonbinary appointee,” she said. “I would expect it.”

Biden has named to his transition team Shawn Skelly​, former special assistant to the undersecretary of defense for acquisition, technology and logistics, and coordinator of the Defense Department Warfighter Senior Integration Group. Skelly was the first transgender veteran to be appointed by a U.S. president. The Victory Institute plans to provide the Biden transition team with a list of suggested LGBTQ leaders, in the hopes of seeing the first LGBTQ person in a Cabinet-level position. Among them is Pennsylvania Health Secretary Rachel Levine, a transgender woman who has been leading the state’s response to the coronavirus pandemic.

Transgender advocates in the nation’s capital, long a leading hub of LGBTQ resources, say they hope the Biden administration helps support local centers that cater to homeless and vulnerable transgender people. “We appreciate the solidarity, we appreciate all those things, but at the end of the day the only thing that makes a difference is the resources we need to survive every day,” said Ruby Corado, founder of Casa Ruby, a center in D.C. for LGBT youth.

Tamika Spellman, a longtime advocate for transgender sex workers in the District, said she sees Biden as a “cop lover” who supports more policing, instead of less. “If they think that’s what is going to be the answer to the issue, that is not it,” Spellman said. “The answer to the issue is housing, resources, job opportunities.”

Beyond Washington, advocates are already seeing echoes of the Trump administration in Republican-led state houses and in conservative courts. Sarah Warbelow, head of the Human Rights Campaign’s team of lawyers and fellows focused on federal, state and municipal policy, said anti-LGBTQ bills are already being filed for the coming year. “What we have seen historically is that when a conservative state house does not like a federal policy,” she said, “they will then try at the state level to discriminate.”

She’s also keeping a close eye on judges confirmed under the Trump administration who “have extreme views that are outside the mainstream and the understanding of constitutional law.”

In Texas, state Rep. Steve Toth, R-Spring, has filed a draft of a bill to classify gender-affirming hormones and surgeries as child abuse when performed on minors. It follows a wave of similar proposals in state legislatures across the country earlier this year.

“A doctor’s first covenant is do no harm,” Toth said in an interview. “These children are too young to be taking hormones when the vast majority are confused and end up going back. These are 7-year-old and 11-year-old kids, picking up ideas from social media and being confused.”

The House Bill (HB) 68 would amend the definition of child abuse in the Texas Family Code to include the removal of healthy tissue, the prescription of puberty-blocking hormones and sterilization surgeries if the procedures aim to “change or affirm a child’s perception of the child’s sex.” The act also targets mental health professionals “attempting to change or affirm a child’s sex, if that perception is inconsistent with the child’s biological sex.”

Susan Williams, an activist in South Dakota and parent of a transgender child, said she hopes state lawmakers do not direct anger over election results against the community. “Transgender South Dakotans have been under attack in our state house since 2014, if not earlier,” Williams said. “This deeply harmful trend has continued regardless of the national political landscape or which party the president belongs to.”

Legislation at the state level can also have unanticipated effects, experts say. Public opinion research shows those debates can actually lead to greater acceptance, said Andrew Flores, an assistant professor of government at American University whose research focuses in part on attitudes of the LGBTQ community. He cited research showing that in states where people were asked to vote in ballot measures banning same-sex marriage, attitudes shifted in favor of same-sex marriage at a stronger pace over time. Even anti-LGBTQ backlash can ultimately be “a source of potential change,” he said.

From LGBTQ issues to immigration to racial justice, the Trump administration galvanized liberal activism across the country, in marches and protests and get-out-the-vote efforts. The question for some transgender advocates is whether that level of energy will continue after Trump leaves the White House.