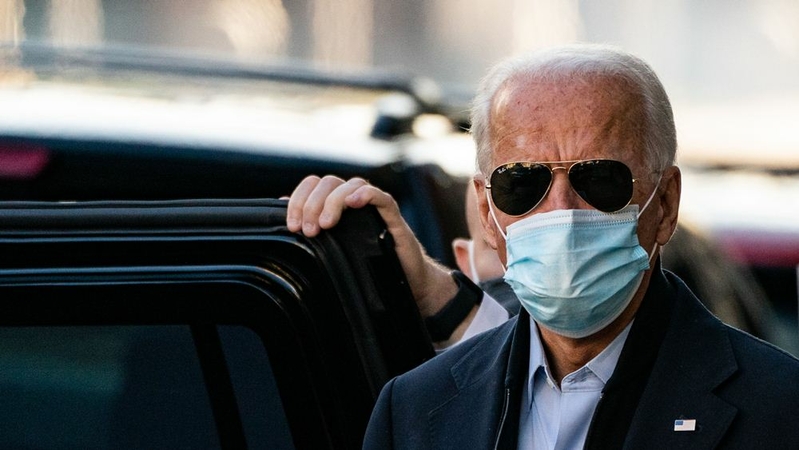 WILMINGTON, Del. – An emotional President-elect Joe Biden praised Republican governors and others who have bucked President Donald Trump to endorse more-stringent measures to control the spread of the coronavirus, while warning Wednesday that a “tough guy” approach contributes to preventable deaths.

Biden contrasted restrictions imposed by Ohio Gov. Mike DeWine, a Republican, and a growing number of other Republican leaders with what he suggested is Trump’s negligence.

“Now you have the governor of North Dakota, you have others figuring it out, that this is real. We’ve got to do something,” Biden said as he led an on-screen briefing with nurses, a firefighter, a home health aide and others with firsthand experience dealing with the pandemic.

“And it’s not a political statement. It’s not about, you know, whether you’re a tough guy or not a tough guy,” Biden said, breaking off. “. . . It’s about patriotism. If you really care about your country, what you want to do is keep your neighbors and your family safe.”

Sounding frustrated, Biden said that tens of thousands more Americans could die before he takes office in January, and that some of those deaths could have been prevented.

More Republican governors are now requiring people to wear masks, including some who had earlier said it was futile or unacceptable to require people to do so.

They include Iowa Gov. Kim Reynolds, who for months dismissed mask mandates as “feel good” measures and appeared at indoor Trump events unmasked. On Monday, she ordered Iowans to wear masks indoors for at least three weeks. The state’s senior U.S. senator, 87-year-old Charles Grassley, a Republican, said Tuesday he had tested positive for the virus.

Rules about mask use have been tightened elsewhere in the Midwest, as well as in Utah, North Dakota and West Virginia.

Biden plans to meet by video with some of the nation’s governors Thursday.

On Wednesday, Biden choked up as Mary Turner, an intensive care nurse from Minnesota, described having to reuse protective masks and told Biden she had not yet been tested for the coronavirus, despite potential exposure since February.

“You’re kidding me,” Biden said, before musing about his experience in intensive care when he had two life-threatening brain aneurysms in 1988 and the challenges faced by doctors and nurses caring for the sickest patients.

“You’re heroes,” he said with a catch in his voice.

Biden has focused on the pandemic as the greatest challenge facing the country, a campaign message made more urgent as the nation suffers a wide surge in cases and hospitalizations that began before the election.

“The words of a president matter,” Biden said as he promised to prioritize the needs of workers like those who spoke with him Wednesday. He reiterated that he will urge mandatory mask-wearing and wider use of testing and tracing to control the spread of the virus.

Biden’s message of alarm has become more complicated, however, amid promising news of coronavirus vaccines and as many Americans appear ready to flout public health guidance to gather for Thanksgiving.

About 40% of Americans plan to attend a large Thanksgiving gathering, despite the warnings from public health officials. Biden said he had decided to limit his own family gathering to three people this year.

Public health experts predict another surge in infections after the holiday next week, propelled by the larger gatherings and the travel involved in convening them.

Roughly 1 in 100 Americans are contagious with the coronavirus now, a level not seen since the initial peak in the United States in the spring, according to estimates by separate research teams at Columbia University and the University of Washington.

Experts have warned that the advent of a vaccine may make some people complacent, just as cases are spiking.

Vaccines will not be widely available at least until the first months of Biden’s presidency next year, and then they will be in limited supply. Biden has been unable to plan fully for that rollout because Trump refuses to concede the election and begin the normal process of handing over power.

On Tuesday, Biden’s lead advisers on the pandemic told reporters that the vaccine rollout faces huge hurdles aside from Trump’s refusal to cooperate now.

“For the first time we can see an end to this pandemic,” former Food and Drug Administration commissioner David Kessler said as he congratulated those involved in the massive public-private effort that has sped two vaccine candidates to the brink of distribution in record time.

But Kessler echoed Biden in warning that “there is all the difference in the world between a vaccine and a vaccination.”

“Getting everyone vaccinated who wants to be vaccinated is a daunting challenge under the best of circumstances,” Kessler said, noting that there is no universal national system for vaccinating adults.

In an interview Wednesday, Kessler expanded on those challenges, including overcoming skepticism from a variety of constituencies about taking a vaccine when one is available.

“Effectively executing the administration of a vaccine can change the course of this pandemic, but it will be the most complicated undertaking in recent history in the federal government,” Kessler said, noting that full protection will require two spaced injections.

“Getting 300 million people vaccinated with two injections is a huge mission, and we have no time to waste,” he said.

And the lack of visibility into current federal efforts means that for now, Kessler and his colleagues advising Biden cannot reliably predict when the pandemic will turn the corner because enough Americans are vaccinated or immune, Kessler said.

“We have to have a very transparent process both to keep the medical community informed as the vaccine becomes widely available and to boost public trust that the vaccine is safe and will work,” he said.

Trump has both welcomed the vaccine news and complained that it came too late to help him in the Nov. 3 election.

The likelihood of a near-term vaccine was the subject of the president’s lone public appearance at the White House since the election. On Wednesday, his reelection campaign cited the development as part of a political fundraising effort.

“This is UNPRECEDENTED success, and it’s all because of OUR President, who tore down bureaucracy, regulations and barriers to deliver a safe and effective vaccine for YOU,” an email appeal for donations to “defend the election” said.