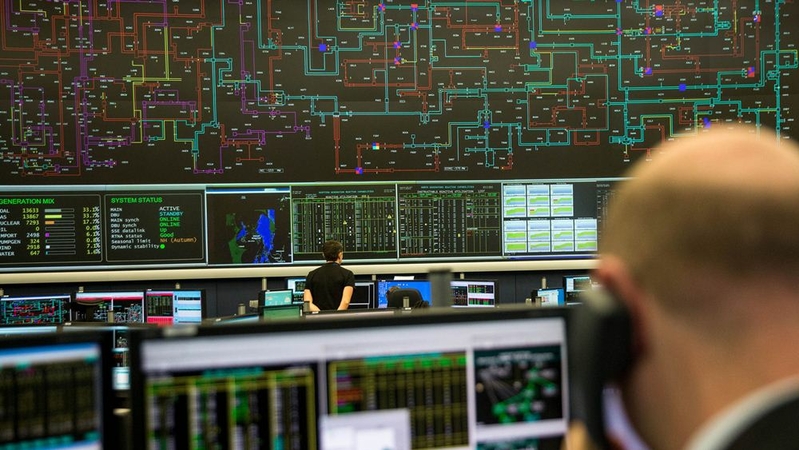 An employee monitors electricity output and usage data on a screen at the National Grid Plc control center in Wokingham, England, in 2015. MUST CREDIT: Bloomberg photo by Simon Dawson

Boris Johnson’s green industrial revolution will strain the U.K.’s electricity network with a huge boost in consumption that will require billions of pounds of investment in new transmission lines and systems.

The program aimed at decarbonizing the economy by 2050 calls on more parts of the economy to use electricity. It brings forward by 10 years the target for phasing out cars that run on diesel and gasoline, favoring electric vehicles, a quicker shift than industry had been anticipating.

All told, power demand will jump by a third by 2050 in the U.K., according to BloombergNEF. That will require a transformation of the way power networks and utilities work, the power grid, forcing them to cope both with thousands of new wind and solar farms and millions of things that people need to plug in.

“There will need to be substantial upgrade to the transmission network, and that needs to happen sooner rather than later,” Alistair Phillips-Davies, chief executive officer of the utility SSE, said Wednesday on a call with reporters. “We should definitely see the regulator looking more favorably on upgrading the network, particularly enabling the connections of offshore wind and strengthening the grid on the coast of the U.K.”

The government and utilities led by National Grid, Electricitie de France and SSE will have to focus on two things: adding power generation capacity that’s fed by renewables and upgrading the distribution grid so that it has the flexibility to balance a system where supply and demand patters are in constant flux.

“The U.K.’s energy networks are the foundation on which the prime minister’s plans for climate action will be built,” said Randolph Brazier, head of innovation at the Energy Networks Association, which represents grid operators in the U.K. and Ireland. “Accelerating the roll-out of electric vehicles and heat pumps, and connecting four times the amount of offshore wind will only be possible with significant investment in the networks.”

On generation, the government’s program to build a huge 40 gigawatt fleet of offshore wind farms will go some way to adding the supply needed and replacing the coal plants coming off line by the middle of this decade. The plan outlined on Wednesday also included incentives for nuclear power, though developers are looking for more specifics on how plants would get funding before agreeing to build additional reactors.

The distribution grid also needs to shift away from relying on a handful of large power plants. Instead, electricity is increasingly feeding into the system from wind and solar farms as well as home-energy systems where consumers have more energy than they can use.

One challenge will be how to keep the system balanced as the rising use of renewables makes the flows into the grid more variable. Regulator Ofgem is set to approve as much as $46 billion (35 billion pounds) planned projects for the five years to 2026. The network companies say this isn’t enough and they’ll need more to achieve what’s being asked of them by government.

Another emerging issue is how and when people charge their electric cars. This will require smart charging and real-time retail electricity pricing so that consumers have information and incentives for when it would be best to plug in their vehicles.

“Rather than placing a strain on the grid, EVs can play a key role in decarbonizing both transport and electricity supply, with smart charging and vehicle to grid technology helping us use renewable energy more efficiently, charging when the sun shines or the wind blows and discharging back to the grid at times of peak demand,” said Fintan Slye, director of National Grid’s Electricity System Operator.