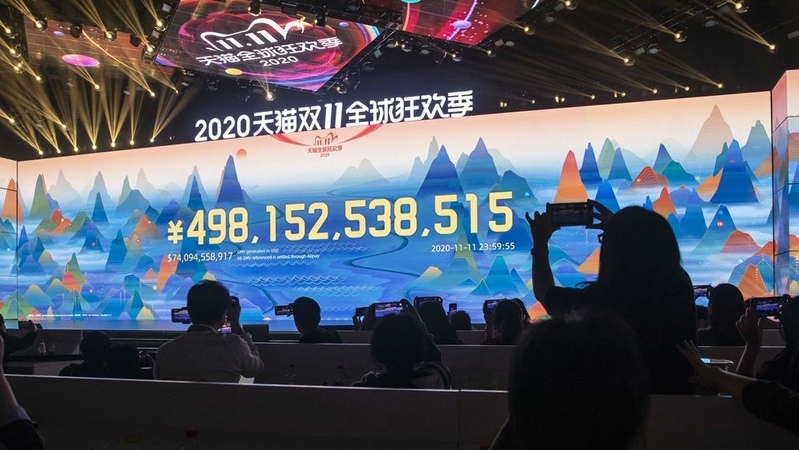 Transaction figures are displayed on a screen at the gala event for Alibaba’s annual November 11 Singles’ Day online shopping event in Hangzhou, China, on Nov. 12, 2020. MUST CREDIT: Bloomberg photo by Qilai Shen

The Securities and Exchange Commission is pushing ahead with a plan that threatens to kick Chinese companies off U.S. stock exchanges, setting up a late clash between Washington and Beijing as the Trump administration winds down.

By the end of this year, the SEC intends to propose a regulation that would lead to the delisting of companies for not complying with U.S. auditing rules, according to people familiar with the matter.

Agency officials have been moving quickly on a rule since August, when the President’s Working Group on Financial Markets — a regulatory council whose members include SEC Chairman Jay Clayton and Treasury Secretary Steven Mnuchin — urged the regulator to pass restrictions that could take effect as soon as 2022, said the people who asked not to be named in discussing private deliberations.

The move is unusual because most agencies stop issuing major new policies after a presidential election, especially when a new party is taking power. It’s unlikely the rule will be finalized before President Donald Trump’s term ends on Jan. 20. Clayton, who plans to step down by the end of the year, will also be gone before any regulation is finished. That would leave completing it to an SEC chief picked by President-elect Joe Biden.

The Nasdaq Golden Dragon China Index fell 0.9% Tuesday, compared with a 0.5% drop for the benchmark S&P 500 index. The gauge, which tracks Chinese companies listed in the U.S., closed at a record high at the end of last week. China’s main stock index was little changed on Wednesday.

At issue is the problem that has vexed U.S. regulators for more than a decade: China’s refusal to let inspectors from the Public Company Accounting Oversight Board review audits of Alibaba Group Holding Ltd., Baidu Inc. and other firms that trade on American markets. It has gained added urgency due to rising tensions between the two countries and following this year’s high-profile accounting scandal at Luckin Coffee Inc.

By pushing through a vote, Clayton would force the SEC’s Republican and Democratic commissioners — all of whom have years left on their terms — to go on record in stating whether they support tougher rules for Chinese companies. Issuing a proposal also requires the SEC to seek public comment and investor advocates would be expected to flood the agency with letters backing Clayton’s plan.

Plus, unlike many policies in this era of heightened partisanship, cracking down on China appeals to both Republicans and Democrats on Capitol Hill. In May, the U.S. Senate approved a bill without opposition that directs the SEC to start the process of delisting Chinese companies whose audits aren’t inspected by American regulators. All of these factors could put pressure on Clayton’s Democratic successor.

The SEC declined to comment on the rulemaking plan.

Fang Xinghai, the vice chairman of the China Securities Regulatory Commission, sounded a positive note on resolving the issue at a panel discussion earlier this week, saying it’s important to ensure that Chinese companies have access to international capital markets.

“I think during the Biden administration we should be able to resolve that problem because it’s not an intractable problem,” Fang said at the New Economy Forum. “All it takes is good will on both sides and a willingness on both sides.”

At a briefing on Wednesday in Beijing, Foreign Ministry spokesman Zhao Lijian said China believes that it’s “important to improve” the qualities of the securities market and regulators and that cross-border regulatory mechanisms are “essential.”

He added that China has in the past reached out to the SEC and other authorities and has never prevented any auditing because it’s committed to building a sound environment.

Chinese stock listings have attracted Trump’s attention, as he ratchets up his attacks on China over the coronavirus pandemic and other grievances. Last week, he signed an order barring American investments in Chinese firms owned or controlled by the military. The SEC’s work on a proposal was reported earlier by the Wall Street Journal.

The fight over audit inspections dates back to the 2002 Sarbanes-Oxley Act, which overhauled regulation of public company audits after the collapses of Enron Corp. and WorldCom Inc. The law set up the PCAOB and required it to conduct regular inspections of the firms that review companies’ books. Though it applies to businesses across the world if they tap the U.S. markets — and more than 50 foreign jurisdictions permit the reviews — China has refused to comply, citing strict confidentiality rules.

U.S. and Chinese officials have repeatedly failed to come up with a compromise. In the meantime, Chinese companies have continued to go public via U.S. stock exchanges even though American law is being ignored. They’ve raised about $12 billion in IPOs this year, the highest since 2014 when Alibaba debuted.

The President’s Working Group report that’s driving SEC action recommended that exchanges such as the New York Stock Exchange and Nasdaq establish enhanced standards to prevent the listing of companies that don’t adhere to U.S. rules. The report called on the SEC to pass new rules, but said they shouldn’t take effect until January 2022 to prevent market disruptions.

U.S. investors’ exposure to Chinese stocks is growing, according to the SEC. More than 150 of the country’s companies, with a combined value of $1.2 trillion, traded on American exchanges as of 2019.

A further clampdown by the U.S. could provide a boost to China’s stock exchanges and the one in Hong Kong. The financial hub has already seen a spate of homecomings from Chinese juggernauts such as NetEase Inc. and JD.com., which have sought secondary listings in the city amid increased tension.

Companies looking to tap the U.S. for customers or added visibility are likely to want to comply, but those who don’t consider America to be a target market could move listings to places like Hong Kong, said Benjamin Quinlan, chief executive officer of Quinlan & Associates, a strategy consultant in Hong Kong.

“I do think Hong Kong exchange in particular as well as some of the local and domestic exchanges in China will be key beneficiaries,” said Quinlan.

Analysts also say there’s plenty of cash in Asia to back listings, both in the region and from abroad.

“Some of these Chinese companies are highly competitive, have been growing strongly and leveraged to some very exciting themes of the future,” said Chetan Seth, Asia-Pacific equity strategist at Nomura Holdings Inc. “I expect that there will always be interest from global investors in some of these names. Potential delistings from U.S. exchanges shouldn’t materially impact the fundamentals of the companies.”