Confident his victory will stand, Biden tries to stay above the fray (nationthailand.com)

Confident his victory will stand, Biden tries to stay above the fray 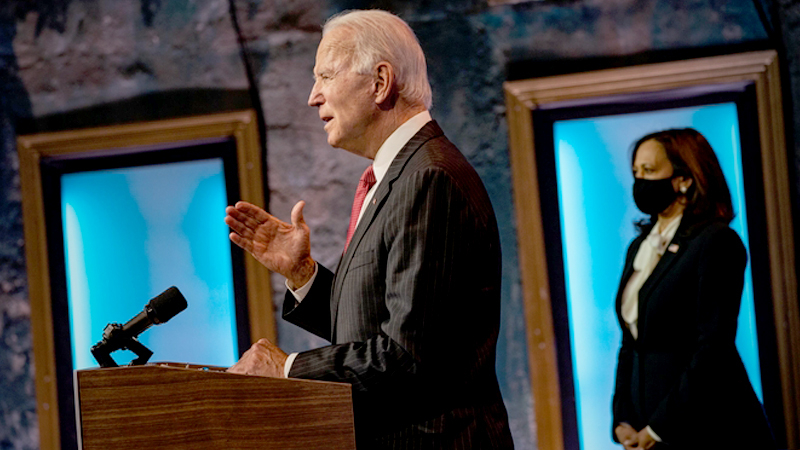 President-elect Joe Biden tried Thursday to minimize as an irresponsible distraction the ever-escalating attempts by President Donald Trump and his allies to undermine or overturn the presidential election results.

The decision reflected confidence among Biden’s advisers that Trump’s maneuverings – from pushing Michigan Republicans to block certification of the results to unfounded claims that U.S. voting machine software had been tampered with by allies of the late Venezuelan leader Hugo Chávez – were little more than public spectacle aimed at satisfying Trump’s sense of grievance with no chance of overturning the vote.

Biden said he did not plan any new legal moves in response to Trump’s latest efforts, but also did not rule out taking action against the General Services Administration at a future date to force a belated recognition of his presidential transition. The GSA, following Trump’s dictate, has refused to allow the traditional exchange of information with the incoming administration, even blocking intelligence and pandemic briefings.

“Hang on. I’m on my way,” Biden said, after being asked what he would tell people concerned by Trump’s efforts to question the results. “That’s what I say to them. Not a joke.”

Democratic strategists and elected officials have largely closed ranks behind Biden’s strategy to avoid engaging directly with Trump’s efforts to spread false conspiracies about voter fraud or pressure political officials to award him the election in states where Biden earned more votes.

“The president-elect has taken the right tack, frankly, to stay above it, to keep focused on preparing himself for the work ahead, to be meeting with people who can help prepare him, even if the president continues to stonewall the transition – and let other actors push back,” Rep. Adam Schiff, D-Calif., said. “It’s in Donald Trump’s interest to continue to make this a partisan food fight. So I think it’s wise for the president-elect to keep some distance from that.”

While largely dismissing Trump’s machinations, Democrats also recoiled at the targets of his baseless allegations of fraud – voters in mostly African American cities like Detroit.

“This is just pure racism, unvarnished,” said Rep. Andy Levin, D-Mich., whose district is just outside the city. “He’s gone outside the bounds of democracy here. Anybody who’s involved in this scheme has left democracy behind and they’re in the land of maintaining power by whatever means necessary.”

Biden has approached Trump’s latest attempts to foment a sense of national crises in the same way his team handled the president’s most disruptive tactics during the campaign, though with arguably less public urgency. Biden previously downplayed the importance of Trump’s efforts to pressure Ukraine to hurt Biden’s campaign in 2019, and was dismissive of Trump’s constant focus on the past business dealings of his son, Hunter Biden.

At the same time, Biden’s campaign has also aggressively reached out to and promoted outside validators who are calling on Trump to accept the results of the election

Tom Donohue, CEO of the Republican-friendly U.S. Chamber of Commerce, said in a statement to Axios on Thursday that Trump “should not delay the transition a moment longer” and he notably referred to Biden as “president-elect.”

“We call on the Trump administration to work cooperatively with President-elect Biden and his team,” the National Association of Manufacturers said in a separate statement from the organization’s leadership.

Yet while Biden was merely a candidate when he dealt with Trump’s previous efforts to sow chaos, he now operates from a relative position of power, as a president-elect projected to win 306 electoral votes after flipping five states in the direction of Democrats, according to current vote counts. Biden’s legal team continues to express confidence that the election result will stick despite Trump’s latest efforts.

Those included directly contacting a Republican on the board of canvassers in Wayne County, Mich., on Tuesday. On Thursday, he invited to the White House Republican legislators from Michigan, who the Trump team hopes can be persuaded to overturn Biden’s 157,000-vote victory in the state.

The Biden campaign believes that suggests a political strategy that is as doomed as Trump’s legal strategy, which has broadly been rejected by state and federal courts. Biden’s advisers predict that any attempt to delay the certification of a state’s vote count so lawmakers could appoint their own electors would be rejected by federal courts as an unconstitutional violation of due process and the right to vote.

Biden’s communications team has also concluded there is no upside to engaging more directly with Trump’s false claims about the election, including broadly discredited conspiracies of massive voter fraud. They are aware that such accusations may weaken voters’ confidence in the election and Biden’s ability to govern across party lines, but think elevating the issue with Biden at the fore would not help.

“The Biden campaign built the largest and most aggressive voter protection operation in history, and they are still out there making sure every vote is counted and all the votes are certified,” said Ben LaBolt, who served as press secretary for Barack Obama’s 2012 reelection campaign. “The president-elect is focused right where he should be, which is staffing his administration and outlining his plan to govern.”

Inside Biden’s operations, the effort of fighting back against Trump has been relegated to a dwindling number of staff who are still working for the campaign and not on the transition effort. Mike Gwin, a spokesman for Biden’s campaign, released a statement Thursday denouncing a news conference at the Republican National Committee headquarters in Washington by Trump’s legal team, including former New York mayor Rudy Giuliani.

“Yet another Rudy Giuliani spectacle exposes, as his appearances always do, the absurdity of Donald Trump’s thoroughly discredited claims of voter fraud,” Gwin said. “Numerous courts, election officials from both parties, and even officials within Trump’s own administration, have all reaffirmed that claims of widespread voter fraud are categorically false. In fact, lawyers for Trump have admitted that in papers filed in court and under direct questioning from judges.”

The news conference included claims that had already been rejected by courts of widespread voter and vote counting fraud, while adding in new claims, like the unfounded accusation that “communist money” from China and Venezuela had influenced the election result.

While multiple Trump suits have been dismissed already, Biden’s campaign has legal teams monitoring all of the continuing challenges, including a recount in Wisconsin, where the state’s Elections Commission on Thursday ordered a review of more than 800,000 ballots in two liberal counties that Biden carried overwhelmingly. That recount was required by law after Trump’s campaign agreed to pay the $3 million cost.

Biden’s campaign has been confident that the recount won’t dramatically shift the state, where Biden won by nearly 21,000 votes.

“The claims are totally laughable and it’s political theater,” said one Biden adviser, speaking on the condition of anonymity because they were not authorized to speak publicly. “We’re focused on the issue that we think the American people care about: health care, covid, the economy. And that’s the split screen: Trump is relegated to a smaller and smaller audience while we’re focused on doing the business of the transition.”

Earlier this month, three days after he had been declared president-elect, Biden said it didn’t matter whether Trump conceded or not.

“I’m confident that the fact that they’re not willing to acknowledge we won at this point is not of much consequence in our planning and what we’re able to do between now and January 20,” he said.

He reiterated the comment Monday, when asked again about Trump’s claims that he instead was the winner. “I interpret that as Trumpianism,” Biden said. “No change in his modus operandi, and I think the pressure will continue to build.”

Biden instead has pushed forward to reframe the political debate around bipartisan efforts to tackle covid-19 and the economic impacts of the pandemic.

On Thursday, he held a virtual meeting with 10 governors – five Democrats and five Republicans – to talk about the coronavirus and their state-level responses amid another surge in cases.

“You need help, and I want you to know that I will be your partner in the White House,” Biden said. “I don’t see this as a red state issue or a blue state issue. I see this – we are all in this together.”

At his news conference later in the day, Biden underscored his belief that the best way forward for the country and his own presidency was in trying to work closely with Republicans in the Senate, who will control the body next year unless Democrats win two runoff elections in Georgia after the new year.

Biden said he had already selected a treasury secretary, who would be announced around Thanksgiving and, he said, was likely to be cheered across the ideological spectrum in his party.

Ultimately, while reserving the right to take legal action to force the Trump administration to recognize his presidential transition, he said that could take more time than building a consensus within the country and among Republican lawmakers that he should be recognized as president-elect.

“I am making a judgment based on many years of experience about how to get things done with the opposition,” Biden said. “My judgment is that we will get further along by actually working with our Republican colleagues now.”

The Washington Post’s Annie Linskey contributed to this report.