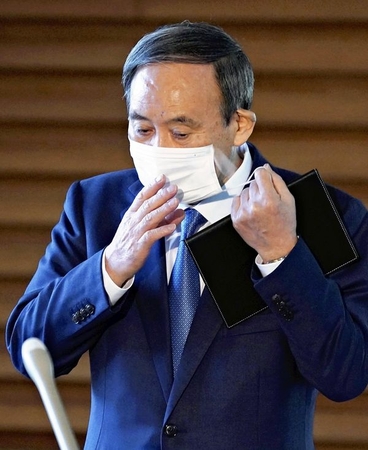 Prime Minister Yoshihide Suga takes off his mask to answer questions from reporters at his office on Thursday. (The Yomiuri Shimbun)

Regarding the government’s Go To Eat campaign to help the food-service industry amid the economic impact of the coronavirus pandemic, Prime Minister Yoshihide Suga told reporters at the Prime Minister’s Office on Thursday morning that he has asked prefectural governors to consider limiting the campaign coverage to groups of four or fewer people dining together in principle.

“The [infection] situation has come to require maximum caution,” said Suga after the daily nationwide number of new cases hit a record of 2,201 on Wednesday.

“Experts point out the risk of infection [when people gather] at the table,” Suga said, indicating his intention to do his utmost to prevent the spread of the infectious disease through meetings that involve eating and drinking.

“I ask [the public] to wear masks during conversations, even when eating or drinking. I will surely do so myself from today,” Suga said.

In the Go To Eat campaign, reward points acquired through dining-related websites are approaching the government’s budget limits and many of the major sites have stopped offering points, but organizations established in each prefecture continue to issue coupons valued at a 25% premium over the purchase price.

The central government plans to leave it up to governors to take specific measures, such as limiting the number of people in groups eligible for the campaign. Some government officials say criteria such as not counting children toward the limit for group sizes and allowing more than five people if the group eats at separate tables should be considered.

The prime minister said he has also instructed relevant ministries and agencies to carry out intensive inspections at facilities for the elderly in areas where COVID-19 is spreading. He also urged them to take more effective measures based on the conclusions of a meeting of the government’s subcommittee on measures to deal with the novel corona virus scheduled on Friday.

The prime minister also said that the government will provide financial support to local governments in areas where the disease is spreading if they ask restaurants and other businesses to shorten their operating hours. To this end, the government plans to earmark ¥50 billion for subsidies for measures against the virus.

Wednesday’s 2,201 new infections were confirmed in 42 of the 47 prefectures and at airports. It was the first time that the number of infections exceeded 2,000 per day. The previous record was set on Nov. 14 at 1,737.

Five prefectures also hit their own record highs on Wednesday. The number was 226 in Kanagawa, 126 in Saitama, 87 in Shizuoka, 30 in Nagano and 493 in Tokyo. The number was 273 in Osaka and 103 in Hyogo, both the second highest on record.