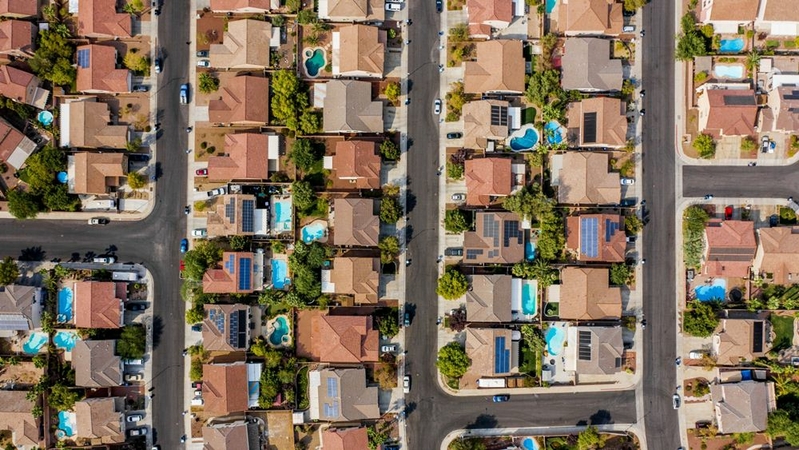 Homes in McCullough Hills neighborhood are seen in this aerial photograph taken over Henderson, Nev., on Sept. 18, 2020. MUST CREDIT: Bloomberg photo by Roger Kisby.

Sales of previously owned U.S. homes unexpectedly rose in October to the highest level in almost 15 years, extending a housing market boom fueled by record-low mortgage rates and buyers’ desire for properties in the suburbs.

Contract closings increased 4.3% from the prior month to an annualized 6.85 million, the strongest pace since November 2005, according to National Association of Realtors data released Thursday. The October rate exceeded all economists’ forecasts in a Bloomberg survey, which had a median estimate of 6.47 million.

The median selling price jumped 15.5% from a year earlier on an unadjusted basis to a record-high of $313,000, reflecting more sales of upper-end properties.

The report offers offers more evidence that the housing sector is providing a bigger push for an economic recovery at risk of a bigger slowdown as coronavirus cases surge and lawmakers remain at a stalemate over additional fiscal stimulus. However, housing momentum, driven in part by preferences for larger homes that double as office space during the pandemic, has led to a lack of available properties and higher prices.

“It’s quite amazing, and certainly surprising,” Lawrence Yun, NAR’s chief economist, said on a call with reporters. “It’s quite remarkable given that we’re still in the midst of the pandemic and the high unemployment rate.”

The association anticipates that the housing boom will be sustained next year. Yun forecasts existing-home sales to climb 10% to 6 million in 2021.

Combined with lean new-housing inventory, selling prices of existing homes grew in the third quarter at the fastest pace in seven years, restraining affordability, a separate report by the NAR showed last week.

Available inventory declined 19.8% in October from a year earlier to 1.42 million units. The inventory of houses would last a record-low 2.5 months at the current sales pace. Realtors see anything below five months of supply as a sign of a tight market.

Sales of previously owned one-family homes climbed 4.1% to a 6.12 million pace, while purchases of condominiums increased 5.8%.

The NAR’s report showed purchases of existing homes increased in all four U.S. regions. Sales in the South, the biggest region, and the Midwest increased to their strongest paces on record, while purchases in the West were the firmest since 2006.

For their part, builders are stepping up construction amid elevated backlogs. Starts of one-family homes in October hit the fastest pace since April 2007, and a measure of homebuilder sentiment is at a record high.

Previously owned home sales account for roughly 90% of U.S. transactions and are calculated when a contract closes.