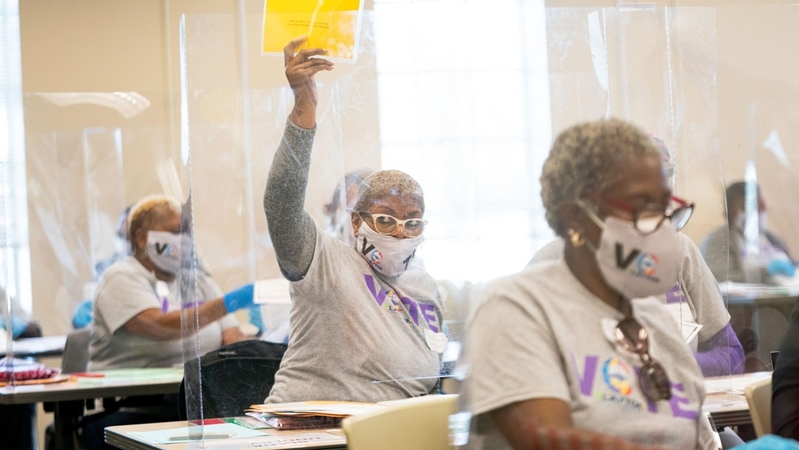 A Clayton County election worker holds up a sign signaling she needs help with determining a vote during a hand recount for the presidential election in Georgia last week. The state is the first of those where President Trump has mounted legal challenges to certify its results, confirming a 12,284-vote lead for former vice president Joe Biden. MUST CREDIT: Photo by Kevin D. Liles for The Washington Post

Georgia’s top Republicans on Friday publicly affirmed the state’s election results, including the victory of President-elect Joe Biden, whose lead in the historically red state prompted a barrage of attacks from President Donald Trump and other Georgia Republicans on the integrity of the election in the state.

Georgia’s Republican Secretary of State Brad Raffensperger, who has forcefully rejected criticisms of the election process by fellow Republicans, on Friday officially certified the results of the general election. The result included Biden’s 12,284-vote lead that was confirmed through a hand recount of 5 million presidential ballots.

After largely staying on the sidelines in the GOP feud, Republican Gov. Brian Kemp said on Friday that he would follow state law, which requires him to accept the secretary of state’s certified results by 5 p.m. Saturday. On Friday, his office confirmed that he had formally certified the results.

“As secretary of state, I believe that the numbers that we have presented today are correct,” Raffensperger said in a statement Friday. “The numbers reflect the verdict of the people, not a decision by the secretary of state’s office or of courts or of either campaign.”

Among the handful of states in which Trump is mounting a legal challenge, Georgia is the first state to certify – or formalize – its election results. But the controversy over the outcome in the state is not yet over.

Trump’s lawyer, Rudy Giuliani, has said the campaign is preparing to file a lawsuit in Georgia challenging its election administration. And the Trump campaign has until Tuesday evening to request another recount of the results, which would launch a process to re-scan the presidential ballots that have already been hand-recounted and audited.

The certification of election results is typically an administrative measure done with little fanfare once election officials have verified the accuracy of the outcome – long after the public has moved on from the election.

But the process has come under the national spotlight this year in Georgia and other battleground states where Trump is fighting election results because it is one of the only remaining avenues through which the finalization of election results could be delayed.

But in the end, the secretary of state issued its final announcements by 4 p.m., an hour before the deadline.

“In certifying the results, the Secretary of State affirmed that all 159 counties have provided to the state the total votes tabulated for each state and federal candidate,” the final announcement read. “Further, the Secretary of State affirms that the statewide consolidated returns for state and federal offices are a true and correct tabulation of the certified returns received by this office from each county.”

The announcement came just one week after counties began the laborious and costly task of hand-recounting each of the 5 million votes cast for president in Georgia. Election officials from different states traveled to Georgia to help, and employees in other county departments were temporarily reassigned to help with the recount.

Raffensperger had ordered the hand recount as a part of the statewide risk-limiting audit process, because Biden’s margin of victory was so thin. He has since come under pressure from fellow Republicans, including Sen. Lindsey Graham of South Carolina, who he said questioned the validity of legally cast absentee ballots, in an effort to reverse President Trump’s narrow loss in the state.

Still, there were enough troubling findings in the audit that Raffensperger on Friday made three recommendations for state legislators to improve the state’s election administration.

Raffensperger requested state legislation that allows the state to intervene in counties that have systemic problems with election administration, including in counties that did not count all the votes that were cast.

He called for an overhaul of Georgia’s absentee ballot laws, recommending additional security measures for mail voting in an effort to increase public trust in how the state verifies its mail-in ballots. He also recommended stricter state requirements that would allow officials to investigate suspected cases of voters who may be on the state’s voter rolls but are no longer eligible to vote in Georgia.

On Friday, Kemp said he believed “the vast majority of local election workers did their job well under unprecedented circumstances.” But he said the mistakes uncovered in four counties through the statewide audit process were “simply unacceptable,” including an instance where about 2,600 ballots in one county were not scanned in the original tally.

In a brief statement Friday afternoon, Kemp said he planned to follow the state’s requirement for him to certify the results.

“State law now requires the governor’s office to formalize the certification, which paves the way for the Trump campaign to pursue other legal options and a separate legal option if they choose,” he said in a statement.

“As governor, I have a solemn responsibility to follow the law, and that is what I will continue to do.”