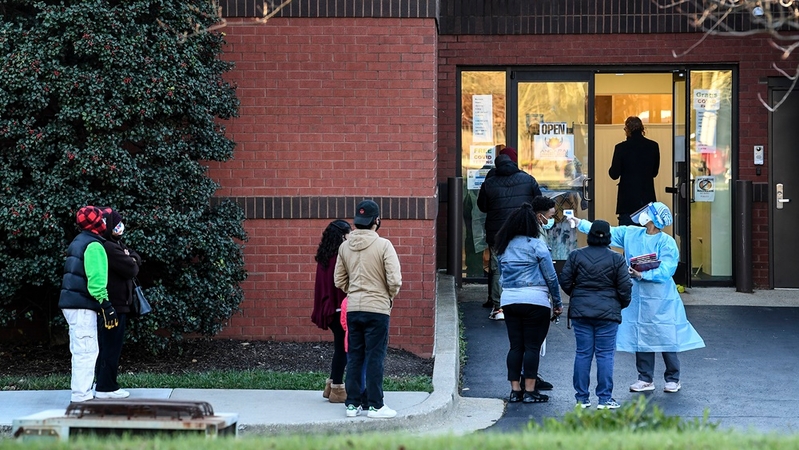 People have their temperature taken as they wait to be checked in to receive a coronavirus test Wednesday in Silver Spring, Md. MUST CREDIT: Washington Post photo by Toni L. Sandys

The rate of coronavirus spread across the greater Washington, D.C., region has doubled since the start of November, pushing the number of average daily cases to a record Friday for a 17th consecutive day.

The continued surge prompted Prince George’s County, Md., to issue a curfew for unaccompanied minors that begins this weekend in its waterfront entertainment and dining district. It follows several new restrictions added across the region’s jurisdictions this month as coronavirus cases have exploded.

Virginia, Maryland and D.C. recorded 5,027 new daily infections Friday, lifting the rolling seven-day average of cases to 4,361 – a number that has risen each day since Nov. 3.

Prince George’s County cited the rise in cases in deciding to impose a weekend curfew at National Harbor beginning at 5 p.m. Friday for unaccompanied minors. County Executive Angela Alsobrooks, a Democrat, has said large groups of young people are gathering in the area, including at hotels where parents have rented rooms for their children to host parties.

She previously warned that those events have upset business owners and posed a threat to public safety.

“We are required to take this necessary action to limit the spread of the virus,” she said in a statement late Thursday announcing the curfew.

The curfew will be in effect starting at 5 p.m. on Fridays, Saturdays and Sundays – continuing until 6 a.m. the next morning – for those 17 and under who are without an adult. Minors accompanied by adults are still allowed to shop and dine in the area.

“We know covid-19 is spreading due to people engaging in these high-risk activities, and it needs to stop or more Prince Georgians will get sick and die,” he said.

Those who violate the curfew, including their parents or guardians, could face a $1,000 fine or a misdemeanor, officials said, noting that it is parents’ responsibility to ensure their children do not violate the curfew.

Prince George’s, like the rest of the region, is seeing a marked uptick in coronavirus cases. The county last week reported 2,087 new cases – a 50 percent increase from the week before. The county’s test positivity rate has increased to 8.5 percent, doubling in the past month.

Across the state, Maryland reported 2,353 new cases Friday, lifting its seven-day average of daily cases to 2,188 – its 17th consecutive daily record. Maryland also reported 26 additional deaths, which ties for the most in a single day since June 16.

A new order from Gov. Larry Hogan, a Republican, went into effect Friday that clamps down on the hours restaurants and bars can operate and the number of people allowed in retail stores and at religious facilities.

The order, which Hogan announced Tuesday, requires bars and restaurants in Maryland to close at 10 p.m. for indoor service and reduces capacity allowed in retail stores, religious facilities, fitness centers, personal service facilities and bowling alleys to 50 percent. It also rescinded an earlier order that allowed fans at racetracks and at college and professional football stadiums.

The statewide order only minimally changed conditions in Montgomery and Prince George’s counties, which generally have opted to reopen at a slower pace than state guidelines allow.

In Virginia, state health officials reported 2,544 new cases Friday, sending the seven-day average number of new infections above 2,000 for the first time since the start of the pandemic. The state also recorded 16 new fatalities.

New D.C. cases in recent weeks have disproportionately originated from Wards 4, 5 and 6, in some of the city’s most gentrifying neighborhoods.

Areas near Union Station, as well as Adams Morgan and U Street, are in the middle of the pack among D.C. neighborhoods for their number of cases since the start of the pandemic, but among the biggest drivers of new cases in the city, according to an analysis of city data by The Washington Post.

Foggy Botton, Capitol Hill and the Southwest Waterfront – which haven’t traditionally been among the city’s hardest-hit areas – have seen the highest rates of increase since late September.

D.C. Mayor Muriel Bowser, a Democrat, hasn’t added new restrictions amid the latest jump in cases but said this week she would do so “soon.” Virginia and Maryland – as well as several of Maryland’s most populous jurisdictions – have reimposed several pandemic-related restrictions in recent days.

The number of fatalities connected to the coronavirus has risen along with case counts in recent weeks. The greater Washington region is averaging 38 virus-related deaths each day, the most since Sept. 22.