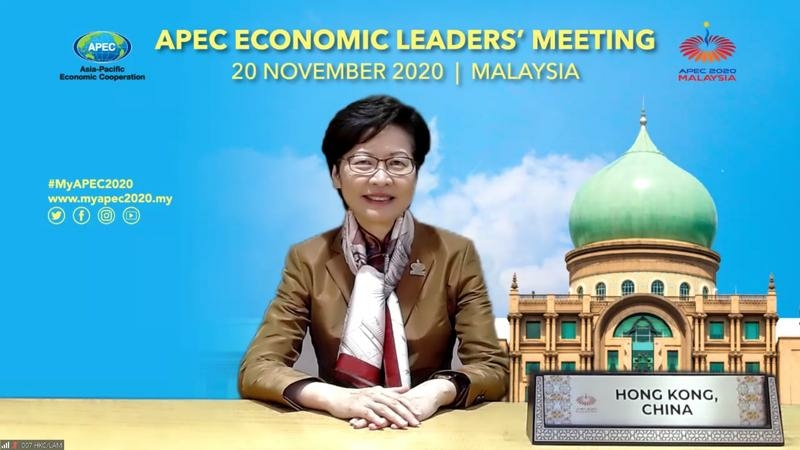 HONG KONG – Hong Kong Chief Executive Carrie Lam Cheng Yuet-ngor called for cooperation among economies in reviving the economy and said they must stand firm against unilateralism and protectionism.

Lam made the remarks as she exchanged views with participants at the Asia-Pacific Economic Cooperation 2020 Economic Leaders’ Meeting on fighting against COVID-19, boosting economic recovery and promoting sustainable and inclusive development on late Friday.

The Economic Leaders’ Meeting was held online for the first time due to the epidemic.

Noting COVID-19 has brought about unprecedented challenges to the world, Lam said it is the duty of various economies to resolutely direct the fight against the virus, adding decisions must be based on science and people’s interests rather than political considerations.

She said the disadvantaged are the ones who often suffer most in difficult times and governments should pay special attention to their needs.

Hong Kong has operated in an open and transparent manner throughout the pandemic with the extensive use of innovative technology and continuous enhancement of virus testing. While the results have been largely successful to date, Lam said the city has to stay vigilant given the epidemic’s volatile development.

Lam also congratulated the 15 member economies on signing the Regional Comprehensive Economic Partnership Agreement, which is a testament to free trade and regional cooperation.

She said the Hong Kong Special Administrative Region, as a separate customs territory and a member of the World Trade Organization, supports the principles of the agreement. She expressed the hope that Hong Kong can join the agreement early and appealed for the support of member economies.

Lam and leaders of the other economies also launched the Putrajaya Vision 2040.

Noting APEC’s long-standing commitment to a rule-based, multilateral trading system fully reflects Hong Kong’s belief in strong, sustainable and inclusive growth, she said she hopes various economies would work collectively to embrace the vision on the path to recovery.