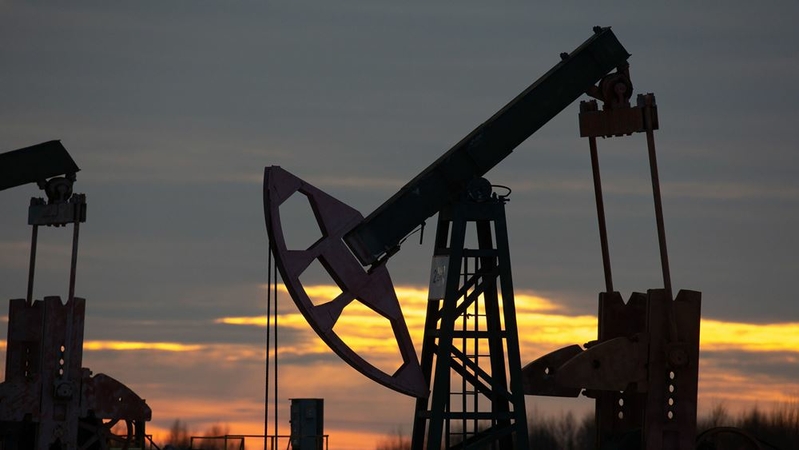 An oil pumping jack in an oilfield near Neftekamsk, in the Republic of Bashkortostan, Russia, on Nov. 19, 2020. MUST CREDIT: Bloomberg photo by Andrey Rudakov.

Oil clawed back some of its earlier losses as shrinking U.S. crude supplies added to an already tightening global supply outlook, though a stronger dollar and rising refined products supplies exerted downward pressure.

Futures were little changed in New York after falling as much as 1.2% earlier in the session. An Energy Information Administration report showed U.S. crude inventories fell by 3.248 million barrels last week, its fifth drop in a row. However, the EIA report also showed builds in gasoline and distillate stockpiles. The Bloomberg Dollar Spot Index strengthened as much as 0.3%, reducing the appeal for commodities priced in the greenback.

“It’s good to see another crude draw” and the remainder of the year should “continue to have drawdowns in overall inventories, especially if OPEC compliance remains pretty strong,” said Brian Kessens, a portfolio manager at Tortoise, a firm that manages roughly $8 billion in energy-related assets. Still, “the refined products side was a little bit disappointing for those people who wanted to be more bullish.”

Prices earlier were boosted by expectations for cold weather to buoy demand at a time when the supply outlook has already been tightening, with Goldman Sachs seeing demand getting a boost of at least 1 million barrels a day. In Japan, power generators have been buying cargoes of low-sulfur fuel oil for the purpose of direct burning, according to traders. Meanwhile, Saudi Arabia trimmed February supplies to at least 11 refiners in Asia and Europe after announcing surprise production curbs last week.

Following recent covid-19 vaccine breakthroughs and Saudi Arabia’s pledge to deepen cuts, oil markets still face a precarious demand picture as the world tries to emerge from the pandemic. U.K. road vehicle use was down 42% on pre-covid levels last week, while aircraft tracking in early 2021 shows little sign of any meaningful rebound in flight numbers. However, the market’s been looking ahead of the near-term virus risks and toward demand returning in the longer term.

“We have a positive outlook,” Russell Hardy, chief executive officer of trading house Vitol Group, said in a Bloomberg Television interview. “The market as usual is racing ahead and factoring in that positive news of a vaccine and the expectation of a better summer and a better second half of 2021.”

A trading executive at Total also said Wednesday that by the northern hemisphere’s summer, oil-product demand should be back at 2019 levels, excluding jet fuel. Use of aviation fuel is unlikely to recover until the third quarter, Mike Muller, Vitol’s head of Asia, said Wednesday.

While crude prices should continue “trading higher over the coming months, investors need to be mindful that the road to higher oil demand and prices will remain bumpy,” said Giovanni Staunovo, a commodity analyst at UBS Group.