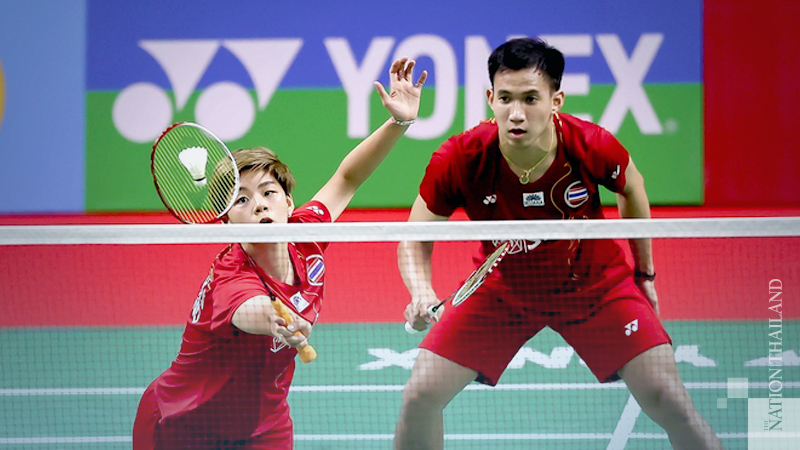 The Thai duo of Dechapol Puavaranukroh and Sapsiree Taerattanachai lived up to their billing as the top seeds, producing an epic comeback to beat Korean left-handers Seo Seung Jae and Chae YuJung to advance to the mixed doubles final of the US$1-million Yonex Thailand Open World Tour Super 1000 at Impact Arena, Muang Thong Thani.

In a rematch of the 2020 Yonex All-England semi-finals, world No. 3 Dechapol and Sapsiree recovered after losing the first game against the fourth seeds and world No. 6 from South Korea for a hard-fought 17-21 21-17 22-20 win on Saturday.

After going down to the Koreans 17-21 in the opening game, Dechapol and Sapsiree made amends with a strong comeback in the second game, with Dechapol producing powerful jump smashes and Sapsiree moving around the court swiftly.

The Thais took the thrilling game 21-17.

In the do-or-die tiebreaker, Dechapol and Sapsiree still relied on their strong defence to lead from the beginning before Seo and Chae hit back gallantly to level at 10-10 and broke away to 18-14. As the Koreans became more prone to unforced errors, Dechapol and Sapiree gradually pulled their game together to catch the rivals at 18-all. However, Seo and Chae won two points in a row to take a 20-18 lead, needing only one more point to take the game and the match.

The Thai duo refused to give up and fought on. They caught up with the Koreans again at 20-all and bagged two more points to win the decider 22-20, and a place in the final.

“In the first game, we focused on our defence, but made a lot of mistakes, while in the second and third games we improved our attack. We found our rhythm,” Sapsiree said after the match.

“I think our unforced errors came as a result of our key focus on receiving. We later worked more on attack and that was the key to our success today. Our coach also gave us useful tips to play them more effectively. We followed the coach’s instructions. We played more aggressively with confidence and consistency and we then got things done,” Dechapol added.

Sapsiree said, “In the second and third games, we played according to the coach’s instructions. I just told myself to play more carefully to avoid unforced mistakes. In Sunday’s final, we will do our best.”

For Dechapol and Sapsiree, it was a repeat feat against the Korean rivals in 10 months. At the All-England last March, the last event held ahead of the cancellation of all tournaments due to the Covid-19 pandemic, the Thai pair had pulled off a dramatic 2-1 (21-18 17-21 21-19) win in the semi-finals, only to go down 1-2 to Indonesians Praveen Jordan/Melati Daeva Oktavianti in the final clash to pick up a silver medal.

However, Dechapol and Sapsiree are looking forward to sweet revenge against Praveen and Melati as the Thai duo will go up against the second seeds in Sunday’s final.