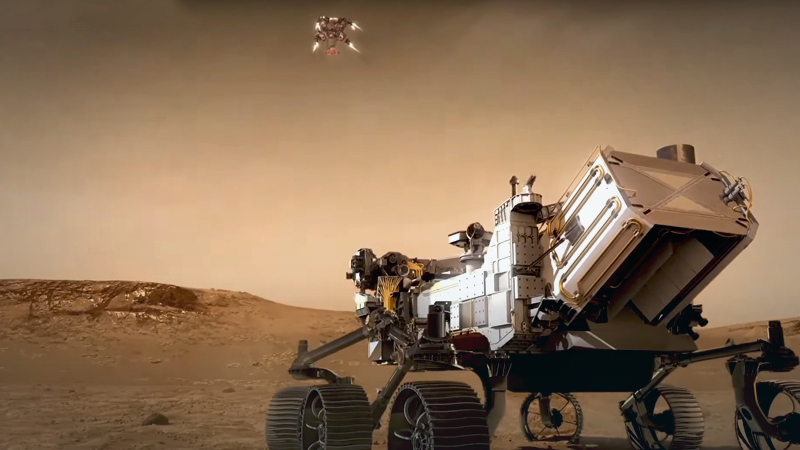 NASA on Monday released stunning, high-definition footage of its car-sized rover landing on the Martian surface last week, the first-time that a spacecraft’s landing on Mars has been recorded in high-speed video.

In the short clip, several cameras mounted at various points on the spacecraft chronicle the descent of the Perseverance rover as it plunges through the Martian atmosphere, deploys its parachute and jettisons its heat shield. The red, dusty Martian atmosphere comes into view as the rover gets closer to the surface. Individual rocks can be seen, as well as entire craters, as the autonomous spacecraft guided its way to a flat landing site.

Then, a whirlwind of dust, as the descent stage fires its engines, and lowers the rover onto the surface with a series of cables.

NASA also released the first-ever sound recorded on the red plant, a small whoosh – a gust of wind traveling at five meters per second, or about 11 miles per hour, NASA estimated.

The sounds and the video “are the closest you can get to landing on Mars without putting on a pressure suit,” said Thomas Zurbuchen, the head of NASA’s science mission directorate.

Documenting the landing, one of the most perilous parts of the mission, known as the “seven-minutes of terror,” was not central to the spacecraft’s primary goal of searching for signs of ancient, microbial life on Mars.

But it was a way to inspire future generations of explorers, NASA said, as well as give engineers feedback on how the spacecraft operated.

“We have taken everyone along with us on our journeys across the solar system to the rings of Saturn, looking back at the pale blue dot and incredible panoramas on the surface of Mars,” said Michael Watkins, the director of NASA’s Jet propulsion Laboratory. “This is the first time we’ve been able to actually capture an event like the landing of a spacecraft on Mars. And these are pretty cool videos. And we will learn something, by looking at the performance of the vehicle in these videos, but a lot of it is also to bring you along on our journey.”

Because the atmospheric conditions are so different on Mars, NASA’s engineers can’t test the landing systems on Earth. “So this is the first time we’ve had a chance as engineers to actually see what we designed,” said Matt Wallace, the deputy project manager. “It’s hard for me to express just how emotional and how exciting it was for everybody.”

NASA had put together compelling animations of the landing that showed the spacecraft hurtling through the Martian atmosphere, then deploying its parachute and finally the skycrane that lowered the rover to the surface. In 2012, it stitched together 297 small images taken during the last two-and-a-half minutes of the Curiosity rover’s landing on Mars. Curiosity also has sent back selfies it has taken of itself on Mars’ barren landscape.

But those pale in comparison to what NASA released Monday.

Video coverage has long been a part of space travel. But with today’s technology, NASA and the growing commercial space sector are giving space exploration a Hollywood-like feel that is a giant leap from the flickering, grainy black and white footage of Neil Armstrong’s first step on the moon five decades ago.

For its next human lunar exploration mission, called Artemis, NASA is looking for a vast improvement, footage that will bring people along for the ride inside the capsule as well as on the surface.

It has put out a solicitation to partners “who will use innovative technologies, imagery applications and approaches” so that the “public can experience different segments” of the missions, including “‘riding along’ with the crew in Orion on their journey to the area around the Moon; visual exploration of the lunar surface; and on the return to Earth.”

The space agency is looking to use everything from 360-degree cameras, virtual reality, 4K and ultra high-definition cameras, “robotic ‘third-person’ views” and other concepts that would deliver “a uniquely-engaging spaceflight experience.”

Elon Musk’s SpaceX has been especially adept at using compelling video to tell the story of its journey – both the successes and failures. Videos posted to its YouTube channel have millions of views, helping it build an enormous fan base, which regularly tunes into launches in a way not seen since the early days of the Space Age.

Its videos have showcased major milestones, such as NASA’s first human spaceflight from United States soil since the Space Shuttle fleet was retired, the launch of SpaceX’s Falcon Heavy rocket, the landings of first-stage boosters, even how it catches the fairings, or nose cones, of its rockets on boats with giant nets like a centerfielder nabbing a pop fly.

Its videos of the flights of its Starship prototypes are enormously popular. They showcase not only the short test flights of the Starship spacecraft that Musk says will ultimately take people to the moon and Mars, but its crash landings that end in fireballs as the company figures out how best to get them back to Earth safely.

It even put together a compilation video from the early days of its Falcon 9 rocket test landings, when they too often ended up exploding as they came crashing to the ground. That video, “How not to land an orbital rocket booster,” set to the marching band tune used in Monty Python’s “Flying Circus,” had 25 million views.

For its major human spaceflight missions, NASA and SpaceX even won an Emmy in 2019 for their joint broadcast of a test flight of SpaceX’s Crew Dragon spacecraft to the International Space Station.

The video of the Perseverance landing gave engineers valuable feedback that showed, for the most part, the systems worked perfectly. But the footage showed there was a problem with one of the springs that helps jettison the heatshield.

“There’s no danger to the spacecraft here, but it’s something we didn’t expect and something we wouldn’t have seen if we didn’t have this camera system to show us what was going on,” said Al Chen, NASA’s lead engineer for the entry, descent and landing systems.