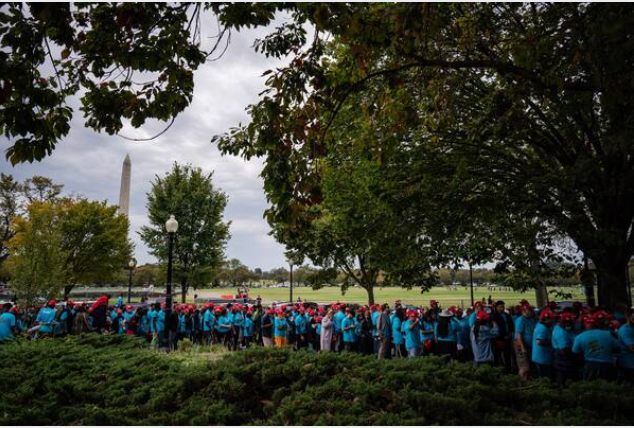 WASHINGTON – President Donald Trump held his first public event since contracting the novel coronavirus, gathering a crowd of hundreds of supporters at the White House on Saturday despite providing no evidence that he was no longer infectious.

It marked the beginning of what aides have described as a triumphant return to campaigning for reelection after his hospitalization – and a sign that the virus that rocked Trump’s campaign and infected much of the West Wing has not changed his combative and defiant approach to governing.

“We’re starting very, very big with the rallies, and with our everything,” Trump told the crowded group of conservative activists while standing on a balcony. “Because we cannot allow our country to become a socialist nation.”

After being confined to the White House and Walter Reed National Military Medical Center since his Oct. 1 positive test for the coronavirus, Trump is scheduled to begin a frenetic stretch of rallies up through Nov. 3. On Saturday, Trump’s campaign announced rallies in Pennsylvania and Iowa on Tuesday and Wednesday, respectively, following a previously announced rally in Florida on Monday.

But how Trump will travel the country safely remains in question. Trump said Friday on Fox News that he had been tested for the virus but did not know if he is still infected.

In a memo released late Saturday, White House doctor Sean Conley said he assessed that Trump was “no longer considered a transmission risk to others” and that “the assortment of advanced diagnostic tests obtained reveal there is no longer evidence of actively replicating virus.”

The White House, which has provided only limited information about Trump’s health since he was released from Walter Reed on Monday, did not say that Trump has tested negative for the coronavirus, and it did not reveal the results of multiple tests Trump has taken since he got sick.

For his part, Trump told the gathered group that a vaccine would soon be available and touted therapeutics that have not yet been approved by the Food and Drug Administration.

While Trump has been isolated in the White House, his Democratic rival Joe Biden has been campaigning across the country. Before traveling to Pennsylvania on Saturday, Biden announced that he had again tested negative for the coronavirus.

Asked if Trump should be holding political rallies so soon after contracting the virus, Biden said Trump should first ensure that “he is not a spreader.”

Although the attendees at Saturday’s White House event were distanced from Trump, social distancing among the crowd was neither encouraged nor enforced.

Trump walked to the lectern wearing a mask before quickly taking it off to address the crowd from the balcony.

While it was billed as an official event – the White House schedule listed it as a “peaceful protest for law & order” – Trump opened his remarks by telling the group to vote his opponents “into oblivion.”

Trump repeatedly attacked Biden by name in what was a highly political stump speech that railed against opponents he described as “the radical socialist left” and “communists.”

The crowd responded with chants of “four more years!”

Speaking from the balcony of the building where he is under isolation, Trump continued to downplay the coronavirus pandemic.

“It’s going to disappear,” he said, repeating a line he first uttered in February, or more than 213,000 deaths ago. “It is disappearing.”

In reality, the coronavirus appears to be resurgent in much of the country, with an average of almost 50,000 cases each day over the past week. More than 900 Americans died of the virus on Friday.

Trump’s continued denial about the coronavirus – even after contracting it himself and suffering serious symptoms – has raised concerns among many Republicans that he is making a grave political miscalculation just over three weeks before Election Day.

Several GOP leaders have sought to persuade the president to make a more measured and focused closing argument about the pandemic and other issues that matter to voters.

Republican lawmakers and officials within Trump’s own administration have criticized the president for failing to put forward a coherent message about the virus other than downplaying it and touting his personal ability to survive it.

“We’re not articulating a vision for where we’re going or even articulating what we’ve done,” said one senior administration official who spoke on the condition of anonymity to discuss internal concerns.

Rather than delivering a national address to the country from the White House, Trump has opted to speak to partisan audiences in conservative media and hardcore supporters.

The spread of the coronavirus among Trump’s White House aides and campaign allies has done little to change the president’s messaging.

Former New Jersey governor Chris Christie is one Trump ally who has advised him to take a softer tone and pivot from the abrasive approach that has driven away moderate voters. Christie, who contracted the virus after spending time with Trump, said Saturday that he had been released from the hospital after a week-long stay.

“I want to thank the extraordinary doctors & nurses who cared for me for the last week,” he said on Twitter. “Thanks to my family & friends for their prayers. I will have more to say about all of this next week.”

Christie was at the Sept. 26 Rose Garden event to celebrate the nomination of Judge Amy Coney Barrett to the Supreme Court, which Anthony Fauci, the nation’s leading infectious-disease doctor, has called a “superspreader event” after at least 11 people who attended contracted the virus. Christie was photographed at the event hugging and chatting closely with people, none of whom were wearing masks or socially distancing.

Saturday’s event on the South Lawn had a similar celebratory mood, as the crowd of several hundred people crowded in front of the White House balcony. While photos from the event showed that many attendees wore masks, there were also several unmasked individuals in the crowd. The attendees were part of a group called “Blexit,” which is a campaign to persuade Black Americans and other minorities to leave the Democratic Party.

Trump’s campaign has said his upcoming rallies will take place at airports in Sanford, Fla.; Johnstown, Pa.; and Des Moines, Iowa – reminiscent of his earlier events that attracted thousands of mostly maskless supporters. The campaign did not announce any additional safety measures despite growing evidence that previous events have been linked to the virus’s spread.

Convinced that the experimental treatment he received is a “cure” for the coronavirus, Trump has shunned calls to reinforce the importance of public health measures such as mask-wearing, social distancing and hand-washing.

In recent days, Trump has turned his focus toward turbulent negotiations between Democrats and Republicans over a massive economic relief proposal. Trump upended the talks Friday by claiming he wanted to spend even more money than the two proposals put forward by each party.

Republican lawmakers lashed out against the White House’s $1.8 trillion plan Saturday, decrying it as too expensive and politically disastrous.

House Speaker Nancy Pelosi, D-Calif., released a letter to House Democrats on Saturday that signaled that the White House proposal would need significant changes and that it took “one step forward, two steps back.”

That proposal includes provisions many people in both parties support, including a new round of $1,200 stimulus checks, small-business support and aid to airlines that have begun mass furloughs after federal aid expired Sept. 30. It also includes expanded unemployment benefits of $400 weekly.

But with Republicans pushing back against the deal, it’s not clear whether Trump is willing to use his political capital to persuade lawmakers in his party to get on board.

He did not mention the economic relief package.