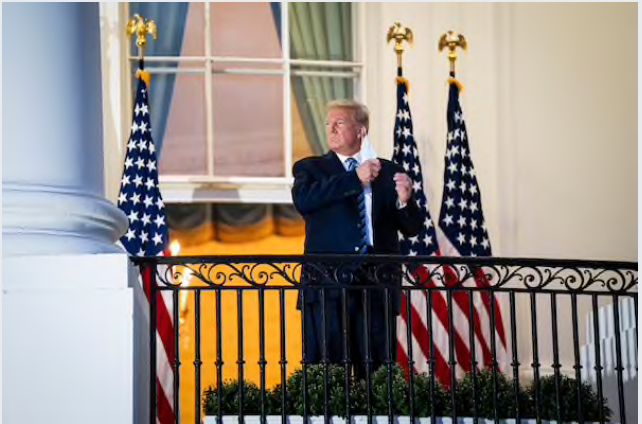 By The Washington Post · David Nakamura · NATIONAL, WORLD, POLITICS, NATIONAL-SECURITY
President Donald Trump was boarding Marine One at Walter Reed National Military Medical Center for a televised flight back to the White House on Monday when CNN analyst Brian Stelter called the dramatic images a “performative show of strength” from a president sickened by the coronavirus.

“This is the kind of thing you see from strongmen who want to appear to be leading – it’s a ‘Dear Leader’ sort of approach,” Stelter said, referring to the moniker of the late North Korean dictator Kim Jong Il.

Stelter wasn’t the only one to make the comparison in recent days. The actor and political activist George Takei questioned a lack of transparency from Trump’s physicians and joked on Twitter that his care was being handled by the “Dear Leader Cleanup Squad.” Rep. Donna Shalala (D-Fla.) ridiculed Trump’s appearance on Fox News with a doctor who vouched for his health: “What’s next? Is President Trump going to ask the press to refer to him as our ‘Dear Leader?’ “

For years, Trump’s critics on the left, as well as some media analysts, have deployed the nickname as a shorthand way to warn of – and mock – what they view as the president’s mimicking of the tactics of authoritarian leaders to project strength and vigor in service of fostering and maintaining a cult-of-personality sway over his MAGA base.

Since Trump announced early Oct. 2 that he had tested positive for the coronavirus, detractors have denounced as dangerous propaganda the White House’s release of carefully staged photos of the president purportedly working at Walter Reed, his motorcade ride outside the hospital to wave at supporters from a sealed SUV, and his maskless salute of Marine One from the Blue Room balcony on the evening he returned to the White House.

“Trump’s physician seeks to please Dear Leader, avoids informing the public,” Rolling Stone magazine posted on Twitter, linking to a story that criticized his doctors for failing to forthrightly answer reporters’ questions on the day of his release.

On Saturday, Trump returned to public view, appearing on the same balcony to address hundreds of supporters on the South Lawn, most of them wearing the president’s trademark red Make America Great Again campaign hats. Many wore face masks but they crowded tightly together, eschewing social distancing safeguards despite a coronavirus outbreak at the White House that has infected the president and at least 33 aides and associates.

Trump, dressed in a blue suit and striped tie, removed his own mask as he stepped to the presidential lectern and, flanked by a pair of American flags, delivered an 18-minute, campaign-style address, as his faithful chanted “Four more years!” and “We love you!”

As it happened, Trump’s rally-style event took place just hours after North Korea’s state television broadcast a military parade in Pyongyang celebrating the 75th anniversary of the country’s ruling Workers’ Party, an elaborate display of goose-stepping troops and intercontinental ballistic missiles presided over by Kim Jong Un, who assumed power upon his father’s death in 2011.

Kim, in a gray suit and tie and flanked by military generals, waved from a viewing box to thousands of flag-waving citizens.

Despite what the president’s critics might suggest in jest or not, Trump and Kim are not remotely the same, nor are the countries they govern. Like his father and grandfather, Kim Il Sung, the North’s first leader, Kim Jong Un perpetrates one of the world’s cruelest regimes – jailing more than 100,000 countrymen in hard labor camps, assassinating political rivals, including his half brother Kim Jong Nam, and detaining Americans, including college student Otto Warmbier, who died in 2017 after 17 months in captivity.

But analysts who study authoritarian regimes said critics are right to posit that Trump has borrowed from the playbooks of strongman leaders in his messaging. Ruth Ben-Ghiat, a historian at New York University, said Trump shares the authoritarian urge for “constant public adoration,” and she emphasized that he is “very savvy about how the authoritarian leader-follower relationship works.”

“It’s not just that he needs to see people cheering, but he also knows his followers need to see him as well,” Ben-Ghiat said. “Strongmen succeed by spinning tales of invincibility. People depend on them. But it only works if the leader is impervious to disease, to things lesser men would not survive, to show their faith is not misplaced. Ordinary men might die, but Trump is able to survive.”

Despite his own infection, Trump has continued to minimize the threat from the coronavirus. In one video message, he erroneously suggested he might be “immune” to the disease.

“Don’t be afraid of covid,” he declared in another video. “Don’t let it dominate your life.”

In the spring, Kim, a smoker who is obese, disappeared from public view for three weeks, a mystery that sparked frenzied media speculation that he had succumbed to a coma or died. On May 1, he reappeared at a ribbon cutting for a new fertilizer factory, seemingly healthy and defiantly smoking a cigarette. Kim has staged other shows of virility; on two occasions last year, North Korean state media released images of Kim riding a white horse on snow-covered Mount Paektu, a sacred mountain freighted with symbolism by the regime.

Kim’s regime has said there are no coronavirus cases in North Korea, a claim that has been met with immense international skepticism, although the nation has implemented even stricter controls than usual. No foreign reporters were granted access to the military parade. At the event, Kim wasn’t wearing a mask, nor were the troops or the thousands of citizens in the stadium.

In a speech at the parade, Kim offered a note of humility, saying he felt “shameful” about the nation’s hardships, which he blamed on the pandemic, a series of natural disasters and international economic sanctions.

Trump has offered no self-reflection over his handling of the coronavirus, which has killed at least 213,000 Americans.

“Had we not been hit by the pandemic,” he told the crowd at the White House on Saturday, “you would have seen [economic] numbers like you’ve not seen before.”

At the close of his remarks, Trump pumped his fist as his supporters chanted, “Trump! Trump! Trump!” Some analysts took to Twitter to compare the balcony speech to the tactics of another authoritarian fascist, Italy’s Benito Mussolini, who in 1940 declared war on Britain during a speech from a balcony in Rome.

Trump’s conservative allies have eviscerated reporters for comparing the president to Kim or other dictators. CBS News reporter Ben Tracy tweeted last week that he “felt safer reporting in North Korea than I currently do reporting at The White House” – prompting thousands of angry responses from Trump supporters, who suggested he go live in the North and dare to criticize Kim.

In an interview, Tracy, who has reported from that country three times, said he was speaking strictly about the threat of an illness such as the coronavirus.

“That was not about the president. It was not about comparing him to Kim Jong Un or the U.S. to North Korea,” said Tracy, who was the only American journalist invited to the North in 2018 to cover a staged destruction of a nuclear facility – a display that he and other journalists treated with skepticism.

In some ways, Trump has left his critics an opening to attack him by comparing him to Kim after his efforts to woo the dictator in hopes of striking a deal in which North Korea would give up its nuclear weapons.

Trump has promoted the idea that he has a good relationship with Kim after hosting summits with him, drawing condemnation from critics who warn that he is normalizing a brutal dictator, and he has described what he calls the “love letters” they have exchanged.

Jean Lee, a Wilson Center expert who served as the Associated Press’s first Pyongyang bureau chief from 2008 to 2013, said that there’s a “danger in being too flip” in comparisons of Trump and Kim.

But of Tracy’s tweet, Lee added: “He has a point about the risk of getting the virus. Clearly, the North is taking more precautions than we are. That says more about us and our government and our response.”